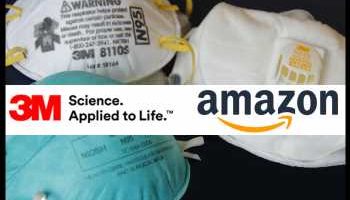 3M Co. sued a third-party seller on Amazon for selling fake, defective, and damaged masks under 3M brand at prices that exceeded as much as 20 times of N95 respirator list prices.

The filing in federal court in California alleges that Mao Yu and his affiliated companies falsely advertised as third-party sellers on Amazon under the 3M brand.

The lawsuit is part of 3M’s effort to combat fraud and price gouging amid the surge in demand for critical products during the coronavirus or Covid-19 pandemic.

Amazon has now blocked the accounts of the third-party seller on its platform. Amazon’s decision was after knowing that the buyers had received non-3M respirators, fewer items than purchased, products in suspect packaging, and defective or damaged items.

According to the 3M complaint, the defendants charged unsuspecting customers more than $350,000 when the customers responded to false listings that claimed to be reselling authentic N95 respirators. They actually were selling damaged and fake goods at highly-inflated prices.

3M seeks both monetary damages and injunctive relief. Any damages recovered will be donated to COVID-19-related nonprofit organizations.

3M said its prices for the respirators remain unchanged even during the COVID-19 outbreak. The company till now has filed more than a dozen lawsuits in its fight against fraud, price gouging and counterfeiting.

In these, it has won five temporary restraining orders and four preliminary injunction orders from courts across the country.

More than 3000 websites have been removed with fraudulent or counterfeit product offerings from e-commerce platforms.