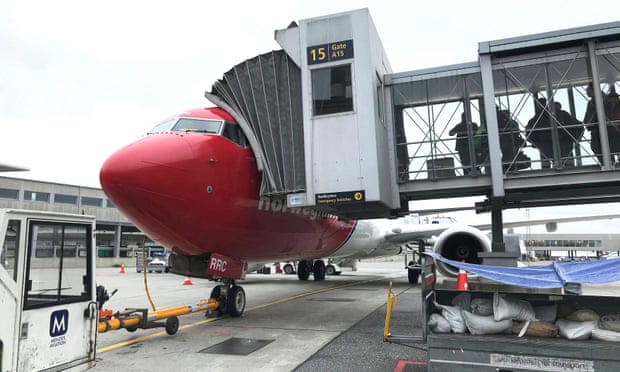 Airlines have axed more flights and demanded urgent government action to help offset the financial impact they are facing from the coronavirus outbreak, as they struggled to digest the impact of Donald Trump’s travel ban to the US from Europe.

Shares in the crisis-hit sector tumbled further after the US said it would block foreign nationals arriving from the EU Schengen zone. Many lost about 15% of their value, and are now down more than 50% in the last three weeks.

The US’s unilateral decision will affect 13,500 flights and 4 million passengers in the next four weeks, according to data from the aviation analysts OAG.

The International Air Transport Association warned that the move could see airlines go under and many would need emergency measures to survive.

Norwegian, one of the carriers most exposed to the US ban, said it would ground 40% of its long-haul fleet and cancel 25% of short-haul flights until the end of May. It is also temporarily laying off half of its staff, across all departments. The airline employs 1,200 people in the UK alone.

Lufthansa, the biggest EU-Schengen carrier to North America, said it would still fly some services to New York, Chicago and Washington, but would cut flights to all other US destinations from Europe from 14 March.

Airlines for America said it commended the president’s decision from a public health perspective, but added: “This action will hit US airlines, their employees, travellers and the shipping public extremely hard.”

Among the worst-hit carriers on the previously lucrative transatlantic corridor is Delta, which operates 18% of the affected flights, and United with 13%.

Flights to the Schengen area account for 11% of all US international flights. More than half of those are to and from Germany, France and the Netherlands.

Although incoming visitors from the UK and Ireland are not excluded from the US by the ban, British Airways is also likely to be affected. Almost a third of transatlantic flights go via the UK. This time last year about 24% of passengers on Heathrow flights to the US started their journey in a Schengen country, OAG data shows.

Airlines for Europe (A4E), a group of carriers including Air France-KLM, IAG – owner of BA, Iberia and Aer Lingus – Lufthansa and Norwegian, called for clarity on EU261 compensation rules. These rules could potentially leave them liable for huge bills for stranded passengers at a time when bookings have collapsed.

Thomas Reynaert, managing director at A4E, said: “Airlines will continue to look after our passengers and our staff as best as we can under the circumstances – but immediate action to alleviate the impact of this crisis in our sector is greatly needed.

“We are now faced with another situation in which there are no formal rules to limit the financial liability of our airlines in case of extraordinary circumstances.”

A4E also called on governments to defer or waive new aviation taxes, and to confirm the relaxation of airport slots rules, granted in principle by the European commission last week, throughout the summer season. The move would allow airlines to ground planes without fear of losing valuable airport slots under existing “use it or lose it” rules.

The association said 850,000 international visitors from Europe (excluding the UK) travelled to the US last March, accounting for nearly 30% of all overseas arrivals, and they spent $3.4bn (£2.7bn) in the US.

Iata’s director general, Alexandre de Juniac, said the move would “create enormous cash-flow pressures for airlines. We have already seen Flybe go under. And this latest blow could push others in the same direction.”

He added: “Without a lifeline from governments we will have a sectoral financial crisis piled on top of the public health emergency.”

Last week, before the Trump ban, Iata warned that passenger airlines could lose up to $113bn (£87bn) in revenues this year, and said urgent action was needed to protect the industry. That forecast was already nearly four times the estimate from two weeks earlier as the coronavirus outbreak spread to Europe.

IAG shares dropped another 15% on Thursday, while Norwegian shares fell another 20%.

Andrew Lobbenberg, an industry analyst at HSBC, cut the target share price for Norwegian from 30kroner (£2.35) to just 0.5 (3.9p). Almost half of the troubled low-cost carrier’s seats are usually on US routes. He said: “While demand was already extremely weak, as Covid-19 impacts confidence, we think it will come close to drying up altogether.”

Baggage handler Swissport has told staff it is planning to cut about 40% of the workforce. Unite said that Southampton and other regional airports needed “immediate government assistance to keep the UK’s airline industry up and running”.