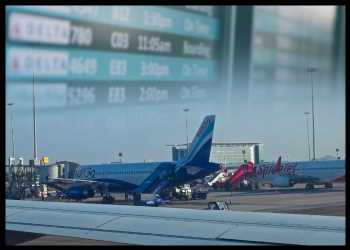 Several major companies are avoiding attending major business events or curbing travel plans of their employees amid worries about the coronavirus. Travel restrictions enforced by governments and the risks of getting quarantined too have hurt demand for air travel.

Thursday, the International Air Transport Association or IATA updated its analysis of the financial impact of the novel coronavirus or COVID-19 public health emergency on the global air transport industry. The agency said it sees 2020 global revenue losses of between $63 billion and $113 billion for the passenger business.

United Airlines and many airlines across the world have already suspended flights to Hong Kong and mainland China, where the coronavirus outbreak emerged.

Further, United, Delta Air Lines, JetBlue Airways and American Airlines have all suspended their change fees due to passenger uncertainty about travel.

Lufthansa, one of the largest airlines in Europe, is canceling about 7,100 European flights until the end of March due to lower demand. This will reduce capacity by up to 25 percent.

The group will also cancel all flights to Israel as well as reduce frequencies in its route network to and from Hong Kong and Seoul. Last week, Lufthansa had said it would suspend flights from Germany to China and Israel.

In the UK, struggling airline Flybe ceased operations Thursday and went into administration. The regional airline, which was already reeling under financial issues, was delivered the final blow by the ongoing coronavirus outbreak.