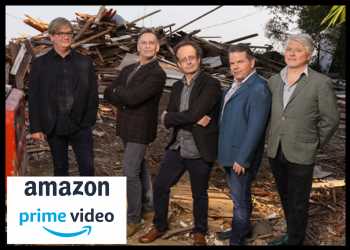 Amazon announced that Canadian sketch comedy series The Kids in the Hall is coming back on Prime Video with eight new episodes.

With the return of all of the original “Kids,” the 8-episode Amazon Original series will be available to Prime members in Canada and more than 200 other countries.

This will be a continuation of the original show, which premiered in 1989 and streamed until 1995 in Canada and the U.S.

All of the original “Kids” will be reprising fan-favorite characters along with new ones for the series.

The original series earned multiple Gemini Awards while its cast was honored with the Canadian Screen Awards ICON AWARD in 2019.

The five members of the comedy troupe will produce new episodes for the tech giant’s Prime Video streaming service. Saturday Night Live creator Lorne Michaels will be the executive producer of the series.

“We’ve been investing in Canada for several years and are excited to add to that momentum by making The Kids in the Hall the first Canadian Amazon Original series,” said James Farrell, Vice President of International Originals for Amazon Studios.

The Kids in the Hall, an iconic show with a deep-rooted fan base, will be the first Canadian Amazon Original series.

“Well no way out of it now,” The Kids in the Hall cast member Dave Foley said on Twitter Thursday. “In fact, we are already busy writing our uniquely horrible brand of sketch comedy,” he added.