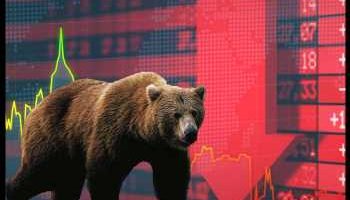 Asian stock markets are sharply lower on Monday as a plunge in crude oil prices added to worries about the rapid spread of the coronavirus outbreak across the world.

Crude oil plummeted 26 percent in Asian trading amid fears of a price war after a proposal by the Organization of the Petroleum Exporting Countries or OPEC for deeper output cuts was rejected by its allies. Saudi Arabia slashed its official oil prices and reportedly plans to ramp up production following the breakdown in talks between OPEC and Russia.

The Australian market is tumbling amid concerns about the coronavirus and fears of an oil price war.

Among the major miners, BHP is tumbling 10 percent, Fortescue Metals is falling almost 8 percent, and Rio Tinto is losing more than 5 percent.

In the banking space, National Australia Bank, Westpac and ANZ Banking are losing in a range of 5.0 percent to 5.3 percent, while Commonwealth Bank is falling more than 4 percent.

Bucking the trend, gold miners are higher after safe-haven gold prices rose on Friday. Newcrest Mining is rising more than 4 percent and Evolution Mining is higher by almost 3 percent.

Air New Zealand has withdrawn its full-year outlook due to mounting disruption from the global coronavirus outbreak and said that its chief executive Greg Foran has voluntarily offered to reduce his base pay by about 15 percent. The airline’s shares are lower by more than 3 percent.

In the currency market, the Australian dollar is higher against the U.S. dollar on Monday. The local unit was quoted at $0.6610, up from $0.6596 on Friday.

The Japanese market is plunging and the safe-haven yen rose sharply against the U.S. dollar on lingering worries about the rapid spread of the coronavirus outbreak around the world and fears of an oil price war.

In the oil sector, Inpex is tumbling more than 13 percent and Japan Petroleum is falling almost 9 percent after Saudi Arabia slashed its official oil prices and reportedly said it will increase production following the breakdown in talks between OPEC and Russia.

The major exporters are weak on a stronger safe-haven yen. Panasonic is plunging more than 8 percent, Mitsubishi Electric is falling almost 7 percent, Sony is tumbling more than 6 percent and Canon is losing almost 5 percent.

Among auto stocks, Honda Motor is declining more than 5 percent and Toyota Motor is lower by more than 4 percent.

Among the worst performers, Pacific Metals is lower by more than 11 percent, while Recruit Holdings, JGC Holdings, Mitsui E&S, Yokogawa Electric and IHI Corp. are all losing more than 8 percent each.

In economic news, the Cabinet Office said that Japan’s gross domestic product saw a downward revision to -7.1 percent on year in the fourth quarter of 2019. That was worse than expectations for -6.6 percent after last month’s preliminary reading suggested a decline of 6.3 percent.

The ministry of Finance said Japan had a current account surplus of 612.3 billion yen in January, up 6.6 percent on year. That was shy of expectations for 623.5 billion yen and up from 524.0 billion yen in December.

The trade balance reflected a deficit of 985.1 billion yen, also missing forecasts for a shortfall of 962.0 billion yen following the 120.7 billion yen surplus in the previous month.

In the currency market, the U.S. dollar is trading in the mid 105 yen-range on Monday. The yen broke rose to a high of 103.52 per dollar in early trades.

On Wall Street, stocks remained firmly negative throughout most of the trading day on Friday but staged a notable recovery attempt going into the close. The worries about the coronavirus outbreak overshadowed the Labor Department’s usually closely watched monthly employment report. The report showed much stronger than expected job growth in the month of February, although traders view the data as old news as the coronavirus fears have ramped up only recently.

The Labor Department said employment surged up by 273,000 jobs in February, matching the upwardly revised spike in January. Economists had expected employment to increase by about 175,000 jobs, compared to the jump of 225,000 jobs originally reported for the previous month.

The major European markets also showed substantial moves to the downside on the day. While the French CAC 40 Index plummeted by 4.1 percent, the U.K.’s FTSE 100 Index and the German DAX Index plunged by 3.6 percent and 3.4 percent, respectively.

Crude oil prices plummeted to the lowest level in several years on Friday after the Organization of the Petroleum Exporting Countries’ proposal for deeper output cuts was rejected by its allies. WTI crude oil for April delivery plunged $4.62 or about 10.1 percent to $41.28 a barrel.