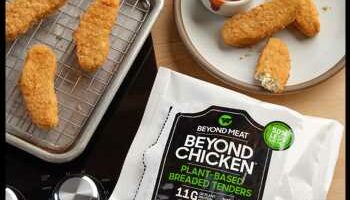 Beyond Meat Launches Beyond Chicken Tenders In Prominent Retail Chains

Popular vegetarian meat makers, Beyond Meat, Inc (BYND) said that their plant-based chicken substitutes will be available in prominent grocery chains across Canada. The company’s Beyond Chicken Tenders will also be available in the United States from October.

Beyond meat first introduced its chicken strips in the US more than two years back, exclusively for certain KFC outlets, and in an attempt to focus on their other product, Beyond Burger, the company discontinued its product. In July, the meat-alternative makers launched its new Beyond Meat Nuggets and it became a huge hit with the consumers. Panda Express ran out of Beyond The Original Orange Chicken within two weeks of their introduction in chosen Californian outlets while more than 1000 A&W outlets in Canada ran out of Beyond Meat Nuggets. This new variant of chicken substitute is made of faba beans. The company said that the products will be available in the frozen food sections in selected grocery outlets.

“Following the success of our plant-based chicken in restaurants, fans were eager to get their hands on a retail product that’s readily accessible and can be cooked at home anytime.
We’re thrilled to be answering consumer demand by launching Beyond Chicken Tenders at prominent retailers nationwide, continuing our momentum in the plant-based poultry category,” said Deanna Jurgens, Chief Growth Officer, Beyond Meat.

Ethan Brown, the CEO of the company explained the requirement of serving the consumers with different kinds of proteins. He said, “We think it’s important to continue offering the consumer a diversity of proteins. You’ll see, in the coming years, we’ll come out with products that have different proteins altogether.”

The company claims that their product comes with half the amount of fat as regular meat, and the products contain no GMO, antibiotics, or hormones making them the healthier choice for the consumers. While the pandemic did stunt the growth of the company for a couple of years, Brown expects a strong recovery. “It’s kind of a less clear landscape than it was when the pandemic first hit, but our products continue to do really well in retail, and so we expect this one to be really well received,” said Brown.

The products will be available for $4.99 per retail package in places like Walmart, Jewel-Osco, Safeway NorCal, Harris Teeter, Giant Foods, and Shoprite. Walmart is also looking to add more shops to sell other prominent Beyond products. Beyond said, “Walmart plans to increase the number of stores offering Beyond Breakfast Sausage Classic Patties by more than 1,500 stores and Beyond Breakfast Sausage Spicy Patties by more than 1,300 stores.” The company is aiming to reach as many people as possible but at a steady pace to make everyone aware of both the health benefits and also the rich taste of their meat alternatives.

Brown added, “If you look at Beyond Meat’s strategy, beginning back in 2009, we have never been about the high-end restaurants. While we appreciate that and understand it’s important for our culture, we have always been about providing consumers the food that they love, where they are shopping, and for the mainstream. And there’s nothing that’s more representative of that than Walmart.”

Beyond was recognized by the National Restaurant Association with the fifth consecutive Food and Beverage (FABI) Award earlier this year.