New cases of Covid-19 in California rose about 10% over the weekend, a timeframe that often sees undercounts due to diminished testing on Saturdays and Sundays. The 10,356 new cases reported on Friday rose to a three-day daily average of 11,135 on Monday. (The state has stopped reporting daily cases on weekends and now reports a three-day lump sum on Mondays.)

That 10% rise on Monday followed a 39% one-day rise from Thursday to Friday of last week, making for a total 49-plus percent rise in new cases since just Thursday. More reliable measures of infection spread have also risen dramatically.

California hospitals have added over 1,000 new Covid patients in the past week, a substantial increase given that the number of patients hospitalized with the virus last Monday the 26th was 3,595. Today the reported number of infected patients was 4,772.

L.A. is driving much of the surge. On one day last week the county, which accounts for 25% of the state’s population, registered nearly half of its new daily cases.

Providence Saint John’s Health Center in Santa Monica — a city where approximately 80% of eligible residents are vaccinated — is currently packed with Covid patients, according to a Monday New York Times report.

Numbers presented by L.A. County Public Health Director Barbara Ferrer last Tuesday indicate there has been a fivefold increase in new Covid patients under 12 years old. (For perspective those under 12, who are not eligible for vaccination, make up about 15% of the county’s population.) While raw case numbers were low relative to county residents ages 12 to 49, data indicating the spread of infections are not.

In the two-week period ending July 18, there were 89 cases per 100,000 people age 0 to 4 and 112 cases per 100,000 age 5 to 11. While there were no pediatric Covid deaths were recorded in the county for the period from June 18 to July 18. Ferrer’s presentation to the board indicated that the hospitalization rate for children age 0 to 4 in Los Angeles County has doubled in a month. See chart below. 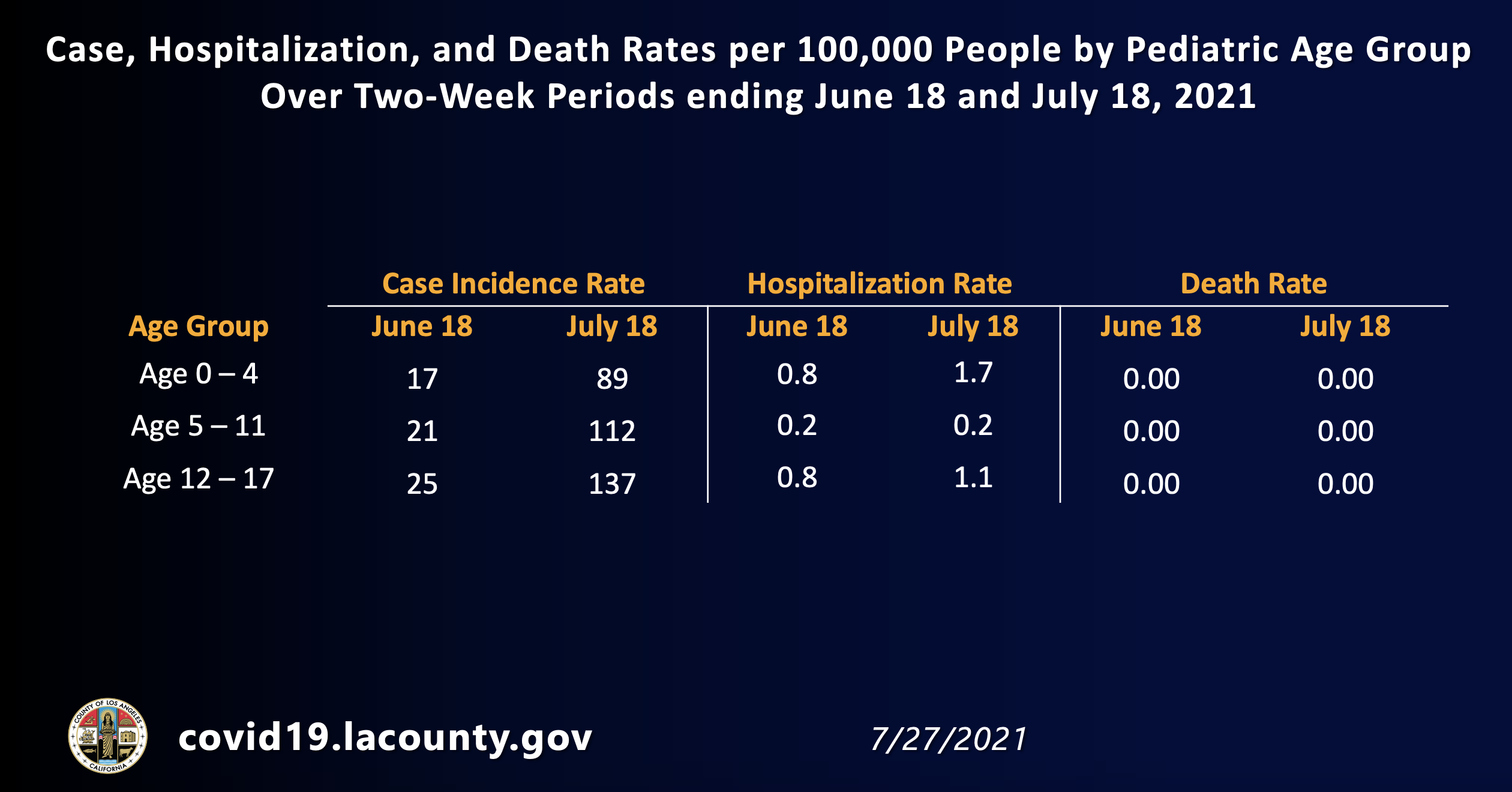 The spike in case rates among the very young is precisely what many health experts have feared as daily . vaccinations are still low compared to last winter and the state’s vaccination rate for all citizens — including those not eligible for vaccines — remains below 55%. Many kids inn the state are due to be back in school shortly, where masks have been mandated.

The news from one East Bay area school district that recently returned to in person learning is not promising. The 11-school Brentwood district confirmed at least 15 positive Covid cases among its students and staff just three days into the new school year. While cases among kids are most often mild, a more rapid spread due to the Delta variant — and the possibility of new variants popping up as the virus mutates among new hosts — is not a pretty picture for kids or parents, who’ve already been through a year of pandemic worries, not to mention homeschooling.