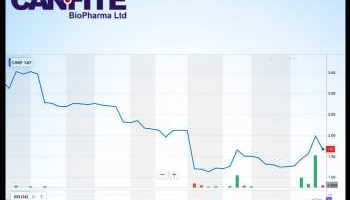 Can-Fite BioPharma Ltd. (CANF), which awaits a major catalyst this month, has lost 49 percent of its share price value so far this year.

Catalyst due this month

Namodenoson, an oral twice daily compound and one of the Company’s lead assets, is under a phase II study in the treatment of NASH, (nonalcoholic steatohepatitis), with topline results expected later this month. NASH refers to liver inflammation due to fat buildup in the liver.

Patients who suffer from NAFLD/NASH with evidence of active inflammation are treated twice daily with 12.5 mg or 25 mg of oral Namodenoson, or placebo for 12 weeks. The primary endpoint of the study is the anti-inflammatory effect of the drug, as determined by mean percent change from baseline in ALT (alanine transaminase, a liver enzyme) blood levels and safety.

An estimated 16 million Americans are said to have NASH, and there is no approved drug for this yet. The global addressable pharmaceutical market could reach $35-40 billion by 2025, according to analysts.

Other drugs in the Company’s pipeline

Piclidenoson, an oral drug, is under phase III development in Rheumatoid Arthritis and Psoriasis.

The interim analysis of Piclidenoson in the phase III study of Rheumatoid Arthritis is expected to be released during the fourth quarter of 2020. The Company is also exploring a collaboration to look at the effect of Piclidenoson against Coronavirus.

A phase III study of Namodenoson in the treatment of advanced liver cancer is also being planned.

CF602, earmarked for the treatment of erectile dysfunction, is in preclinical testing.

Can-Fite, which had cash and cash equivalents of $4.68 million as of September 30, 2019, raised gross proceeds of approximately $5.0 million from a public offering last month.