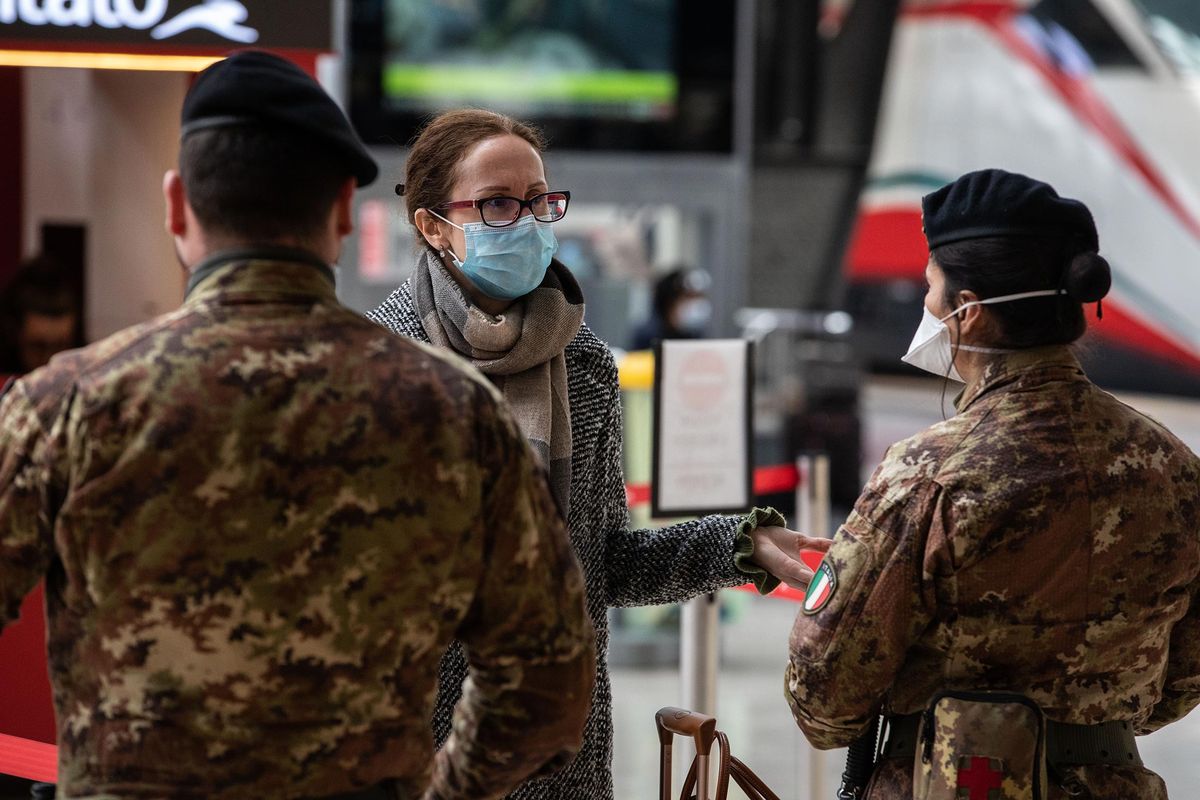 Oscar-winning actor Tom Hanks said he and his wife have the pathogen, which a top infectious-disease specialist said is 10 times more deadly than the seasonal flu. The National Basketball Association canceled all games until further notice, and officials across the globe took steps to discourage or ban large gatherings as cases reached 125,000.

The global stock rout deepened as Trump stopped short of offering a detailed rescue package, even as Australia and the U.K. unveiled stimulus measures. Trump’s clampdown on European travelers delivers a hammer blow to the already-reeling airline industry.

Subscribe to a daily update on the virus from Bloomberg’s Prognosis team here.

Click VRUS on the terminal for news and data on the coronavirus and here for maps and charts. For analysis of the impact from Bloomberg Economics, click here. To see the impact on oil and commodities demand, click here.

The U.S. Centers for Disease Control and Prevention raised its travel warning for Europe, advising Americans to avoid nonessential travel to specified countries in the region.

“Travelers returning from the specified countries in Europe must stay home for 14 days after returning from travel, monitor their health, and practice social distancing,” the CDC said in a statement on its website.

The U.S. State Department earlier raised its travel advisory to Level 3, one step below the most severe category, as it cautioned American citizens against traveling abroad.

The department warned that many parts of the world dealing with outbreaks of the virus “are taking action that may limit traveler mobility, including quarantines and border restrictions.”

India suspended most visas in a bid to halt the spread of the coronavirus. All existing visas — except permissions given for diplomatic, official, United Nations, other international organizations, employment and project visas — will be suspended until April 15, according to a government statement Wednesday.

Governments should roll back or refrain from using travel restrictions as the coronavirus is mainly being spread through local transmission rather than imported cases, a trade group of Asian airlines said.

“Given that the Covid-19 outbreak is now progressing across the globe, it is time for a fundamental rethink on travel restrictions,” the Association of Asia Pacific Airlines said in a statement, shortly before U.S. President Donald Trump announced a 30-day suspension of travel from continental Europe to the U.S.

Speaker Nancy Pelosi plans to have the chamber vote on the bill Thursday, a day after President Donald Trump announced his own plan to try to contain the virus and deal with the economic impact.

A total of 29 people were killed after a hotel in southeastern Fujian province that was used to quarantine people affected by the coronavirus collapsed on March 7, China News Service reported.

New York Governor Andrew Cuomo said organizers have agreed to postpone this year’s St. Patrick’s Day Parade in an effort to contain the spread of the coronavirus, according to a statement from his press office. No new date was given for the parade, which draws about 250,000 marchers and 1 million to 2 million spectators to Manhattan.

U.S. President Donald Trump canceled campaign events in Colorado and Nevada “out of an abundance of caution from the coronavirus outbreak,” White House spokeswoman Stephanie Grisham said in an emailed statement. The campaign’s Tim Murtaugh said in a Twitter post that Trump’s March 19 event in Milwaukee is also postponed and will be rescheduled

Twitter Inc. escalated its coronavirus response by mandating that all employees must work from home, having previously only recommended the practice. The San Francisco-based company has more than 35 offices around the world, with its Hong Kong, Japan and South Korea locations already put on mandatory remote work due in part to government restrictions.

The U.S. Defense Department announced new travel restrictions for military personnel, civilians who work for the department and family members because of the coronavirus.

The restrictions, effective Friday, would “stop movement for the next 60 days” to and from “Level 3 designated locations,” Secretary of Defense Mark Esper said in a memorandum. Countries that have been designated Level 3 by the Centers for Disease Control and Prevention include China, Italy, South Korea and Iran.

South Korea’s health ministry reported 114 new coronavirus cases as of March 12, raising the total tally to 7,869 according to a statement. The total death toll rose to 66 from 60.

Seoul Mayor Park Won-soon said earlier that a total of 99 coronavirus patients are related to a call center in Guro District, according to JTBC. Seventy of those cases are from Seoul.

The NBA will suspend its season following Wednesday’s basketball games, after a player preliminarily tested positive for coronavirus.

“The NBA is suspending game play following the conclusion of tonight’s schedule of games until further notice,” the league said in a statement. “The NBA will use this hiatus to determine next steps for moving forward in regard to the coronavirus pandemic.”

The league also announced that a player on the Utah Jazz has preliminarily tested positive for coronavirus.

American actor Tom Hanks says he and his wife, Rita Wilson, tested positive for the coronavirus while in Australia.

Hanks, in Twitter post, says he and Wilson will be tested, monitored and isolated for “as long as public health and safety requires.”

President Donald Trump said he will suspend all travel from Europe to the U.S. for the next 30 days, the most far-reaching measure yet in the administration’s efforts to combat the spread of coronavirus.

The restrictions, which will not apply to the U.K., will go into effect Friday at midnight, he said in an Oval Office address.

The president asked Congress to take action to deliver paid sick leave to hourly workers who risk their livelihoods if they stay home. He also recommended that nursing homes curtail non-medically necessary visits.

Trump said he is deferring tax payments for certain individuals and businesses affected by the virus. He said the deferments would provide $200 billion in additional liquidity. He added that he is instructing the Small Business Administration to provide emergency capital to affected firms.

China reported 15 additional coronavirus cases as of March 11, the lowest number since Jan. 18. Eight of the new cases were from Hubei, the province at the center of the outbreak, according to statement from China’s National Health Commission.

Duterte to Test for Virus as Cabinet Exposed to Patient (8:26 a.m. HK)

Philippines President Rodrigo Duterte will test for the new coronavirus after his finance and transportation secretaries announced they were exposed to an infected person and will go on self quarantine.

Australia unveiled a A$17.6 billion ($11.4 billion) fiscal stimulus plan to buttress the economy from the coronavirus outbreak that threatens to tip the nation into its first recession since 1991.

The plan announced by Prime Minister Scott Morrison includes A$1.3 billion in support over two years to safeguard the jobs of 120,000 apprentices. The government will also spend A$6.7 billion over four years to support the cash flow of small and medium businesses so they can pay wages during the expected downturn. In addition, the government will expand a tax write-off program with A$700 million in funding over four years to help businesses buy new equipment.

El Salvador is imposing some of the world’s toughest controls to curb the spread of the new coronavirus before it has a single confirmed case of the disease.

Governments from China to the U.S. have been accused of reacting too slowly to prevent the deadly illness from spreading. El Salvador’s President Nayib Bukele said he doesn’t want to repeat their mistakes. “How much would Italy give to be in our position and be able to declare a quarantine before having thousands of cases?” Bukele said in a national address.

The measures involve a ban on all visitors to the country via all ports of entry who aren’t residents or diplomats. Residents who return to El Salvador will be quarantined for 30 days. Schools are suspended for 21 days.

Shutdowns are starting to expand to the middle-America agriculture industry. Derivatives exchange CME Group said it will close its famed trading pits in Chicago at the end of Friday, a precaution to prevent a large gathering that may contribute to the virus’s spread. Elsewhere, the Houston Livestock Show and Rodeo shut down more than a week early, and the Commodity Futures Trading Commission said it was postponing an agriculture conference that had been scheduled for Kansas in early April.

Prime Minister Boris Johnson will chair a meeting of the U.K. Government’s emergency committee Thursday afternoon, and his office said he’s likely to announce that the virus response is moving to the “Delay” phase.

That means accepting that the virus spread can no longer be contained, and instead looking to slow its spread. Options include encouraging home-working, restricting large gatherings, and closing schools. Johnson’s government has faced questions about why it hasn’t done that sooner, but has insisted it’s following scientific advice about the most effective time to shift response.

Basketball Tournament to Be Played Without Fans (4:46 p.m. NY)

Seattle will close its public schools starting Thursday for at least two weeks. With more than 53,000 students, it would be the first major public school district in the U.S. to shut its doors in an effort to contain the spread of the coronavirus. Several other schools in the area, including the University of Washington, have already suspended in-person classes.

Local and state officials across the U.S. took several steps to discourage or ban large gatherings in an effort to slow the spread of the coronavirus. Washington recommended that meetings of more than 1,000 people in the nation’s capital be canceled or postponed through at least March 31.

San Francisco public health officials banned events of 1,000 people or more, including games for the National Basketball Assocation’s Golden State Warriors, which will play without fans during its game Thursday night against the Brooklyn Nets. The order lasts for two weeks but can be extended as needed.

The government declared the period of March 12-26 an official holiday in an effort to limit exposure to the coronavirus outbreak, state-run Kuwait News Agency reported on Wednesday. Employers will continue to pay salaries. All commercial flights will be suspended.

The outbreak of coronavirus is now a pandemic, the World Health Organization’s top official said Wednesday in a press briefing. The long-awaited pronouncement came as worldwide cases topped 120,000 while the number of deaths exceed 4,300.

“All countries can still change the course of this pandemic,” WHO Director-General Tedros Adhanom Ghebreyesus said in the briefing. “If countries detect, test, treat, isolate, trace and mobilize their people in the response, those with a handful of cases can prevent those cases becoming clusters and those clusters becoming community transmission.”

The new coronavirus is the cause of the first pandemic since 2009, when a novel influenza strain swept around the world, infecting millions of people.

Anthony Fauci, director of the National Institute of Allergy and Infectious Diseases, told U.S. lawmakers the new coronavirus is 10 times more deadly than the seasonal flu.

“The flu has a mortality of 0.1%. This is 10 times that. That’s the reason I want to emphasize we have to stay ahead of the game.”