New York (CNN Business)US airlines will continue to fly from Europe for nearly another week, even though European visitors will be banned from coming to the United States after Friday night.

The ban was announced Wednesday night by President Donald Trump as a way to battle the spread of the novel coronavirus. US citizens will be allowed to return to the country even after the ban is in place.
American Airlines said it will operate the flights to “ensure customers and employees can return home.”

American (AAL), the world’s largest airline, is a leader in trans-Atlantic flights, said it would operate many of its European flights through at least March 18. It said it expects to resume suspended flights on May 7.
The ban applies to travel from most of Europe to the United States, although it does not apply to the United Kingdom. American’s flights to and from the UK are expected to continue for now, although at a reduced rate on some routes.

The airline announced it would cut back the schedule more than previously planned. It said it would cut the capacity of international flights during the summer season by 34% versus the previous selling schedule, including a 50% reduction in April trans-Atlantic capacity. On Tuesday, the day before the ban was announced, American said it was planning only a 10% cut in its international capacity in April.
It also announced it would offer extended unpaid leaves of absences, defer raises for managers and institute a hiring freeze.
United Airlines (UAL) announced earlier Wednesday that it would continue its full European schedule through March 19. After that, it would expect to fly daily to Zurich, Brussels Paris, Amsterdam, Manchester and Edinburgh, along with multiple flights to Frankfurt and Munich. It also planned three daily flights to and from Dublin and less than one daily flight to Lisbon.
Delta Air Lines (DAL), the other US airline flying trans-Atlantic routes, said it will operate a nearly full schedule of flights through Sunday from continental Europe to gateway airports with enhanced screening. It said it will then operate a reduced schedule to those cities while monitoring customer demand.
It will discontinue European flights to Orlando, Cincinnati, Indianapolis, Portland, Raleigh-Durham and Salt Lake City after Friday night, because they are not among the 11 cities that allow European travel because they don’t have the enhanced screening of passengers.
Delta also requested customers who are not traveling in the next 72 hours to wait before contacting the airline about their travel plans “to help address customers with immediate travel needs.”
Airlines are continuing flights to and from Europe after the ban begins just after midnight Friday because they did not have enough capacity to get all the US customers with return tickets back to the United States by the deadline. Many US citizens also work, study or live in Europe, and some wanted to get home as the ban goes into effect.
The airlines are dealing with plunging demand for international travel, which is the reason some of the flights are being canceled, even where there are no travel restrictions. American’s reduced international schedule includes less service to South America, including a suspension of flights to Argentina. 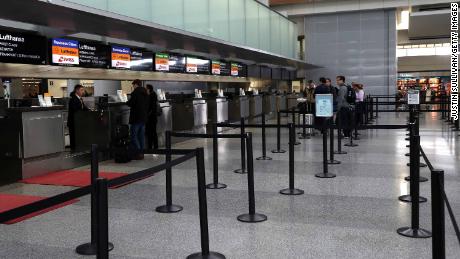 Green card holders, some family members of US citizens and a few other groups are exempt from the travel ban but will face additional health screening and restrictions when they arrive.

American also said it would accelerate plans to retire two of its older, less fuel efficient models, the Boeing 757 and 767. American said its six 767 jets will be retired by May and its 34 757 jets will be grounded by the fall of 2021. It said the move is a cost-cutting move designed to reduce unnecessary maintenance and fuel costs.
Airline stocks have been hit particularly hard in the current market downturn. The NYSE Arca airline index has declined by 50% in the last month, with a 20% drop in Thursday trading alone.
Source: Read Full Article