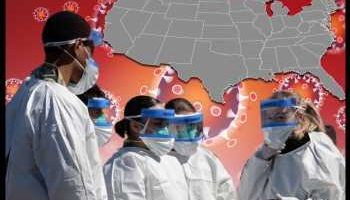 Coronavirus has spread to all 50 states in the United States, where the death toll crossed 100.

According to latest reports, there have been 116 deaths in the U.S. so far from coronavirus and more than 6,500 confirmed cases nationwide.

West Virginia was the latest U.S. state to report its first case of COVID-19.

Announcing this on Tuesday, Governor Jim Justice said, “We knew it was coming and we were prepared for this.” He also announced the closure of all restaurants, bars, and casinos in the state.

6.7 million residents of San Francisco Bay area have been urged to stay indoors until April 7.

Meanwhile, President Donald Trump announced that the April 15 deadline to pay taxes has been extended by 90 days for individuals and businesses negatively affected by the coronavirus.

At a White House news conference, Treasury Secretary Steven Mnuchin said individuals can defer up to $1 million of tax liability and corporations get an extension on up to $10 million.

Defense Secretary Mark Esper said the military would supply five million masks and up to 2,000 ventilators to the health department.

NASA asked all its employees and contractors to work from home until further notice. Mission-essential personnel will continue to be granted access on site.

“Although a limited amount of employees have tested positive for COVID-19, it is imperative that we take this pre-emptive step to thwart further spreading of the virus among the workforce and our communities,” NASA Administrator Jim Bridenstin said in a statement.

In a retaliatory measure, China asked reporters of three U.S. media outlets to surrender their press passes. Chinese Foreign Ministry has reportedly urged correspondents of New York Times, the Washington Post and the Wall Street Journal to leave the country.

The European Union banned all travelers from outside for a month.

All schools in Wales will be closed from Friday.