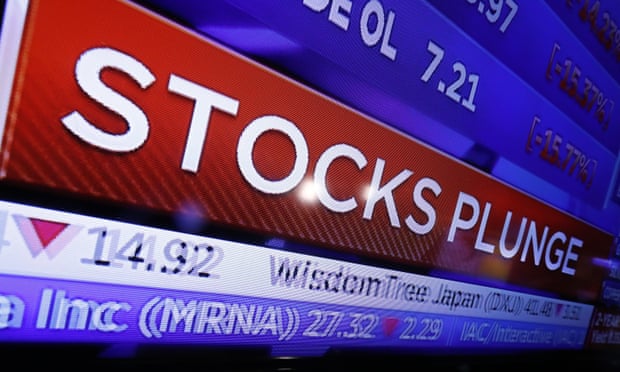 The working week began in the City of London with oil prices down by 30% and the leading barometer of UK shares registering falls of more than 8%, so it didn’t take long for it to be dubbed Crash Monday.

To be sure, those with long enough memories would have been able to recall a similar market panic in October 1987, when a wave of selling began in east Asia and rolled inexorably westwards.

That, though, is about as far as the comparison goes, because the 2020 Black Monday is a lot more serious than the one 30-odd years ago. With a bit of encouragement from central banks, financial markets quickly regained their poise after the 1987 crash and resumed a long upward climb that only came to an end with the financial crisis of 2007.

Will the coronavirus trigger a recession?

It won’t be nearly so simple to pull off that trick this time. For the past decade, the underlying fragility of the global economy has been masked by perpetually low interest rates. Cheap money has been the fuel for rocketing asset prices – shares and bonds in particular – but has done little to boost investment and historically weak productivity growth.

This disconnect has been brought into sharp focus by the coronavirus outbreak. The initial market response was to assume that it was nothing to worry about and would blow over as quickly as previous global health scares, such as Sars in the early 2000s.

When it became clear that the coronavirus was actually a lot more serious than Sars, markets moved into the second phase of denial; that central banks would ride to the rescue with yet more monetary stimulus and so underpin the price of financial assets.

The Crash Monday panic marks the moment when a decade of denial finally ended and traders woke up to the fact that the financial markets had been bobbing along on a giant wave of debt.

As in 1973-74, events in the oil markets have been a crucial factor, only this time the problem has been that the cost of crude has been tumbling rather than rising fourfold. Two major oil producers – Russia and Saudi Arabia – have fallen out over a price-support proposal by the Opec cartel and instead of limiting production have turned the taps full on.

This is clearly a race to the bottom which, if sustained, will drive the global oil price below $20 a barrel before very long. There is, though, more to the spat between Moscow and Riyadh than that.

For a start, it exposes a dearth of global policy coordination. Russia and Saudi Arabia are both members of the G20 – the group of strategically important developed and developing economies – that are supposed to act in unison to prevent or mitigate crises. But the G20 has failed in its promise and not since the 1930s has multilateralism – already strained by the trade war between the US and China – appeared weaker.

In the 1970s, the oil shock added to already mounting inflationary pressure. This time it will do the opposite, pushing many countries closer to deflation. This makes it much harder for central banks to stimulate their economies through lower interest rates, since there is a realistic limit to how low borrowing costs can go.

This won’t stop other central banks from following the lead of the US Federal Reserve in cutting rates, but, as many economists have pointed out, their limited ammunition is perhaps not the best way to respond to what could turn out to be a global pandemic.

The world economy was slowing even before China came clean about the true threat posed by the coronavirus. It is now not a question of whether there will be a further slowdown but of how deep and long that slowdown will be. Some countries – Italy most obviously – are going to suffer serious recessions.

For the global economy as a whole, this is the most serious threat since the banks were within a whisker of collapsing in the autumn of 2008.

In the months that followed that near-death experience, the international community came together to prevent a second Great Depression. Unsurprisingly, there are now calls – from the International Monetary Fund among others – for the big countries to settle their differences and unite behind a global action plan that would boost consumer and business confidence through higher government spending, tax cuts, employment subsidies and support for businesses.

The absence of any real willingness to pursue such a collective strategy is why many observers fear this is more than a rerun of October 1987.

Instead the parallel drawn is with the 1970s when the first oil shock was followed by a second – even more serious – dislocation later in the decade.