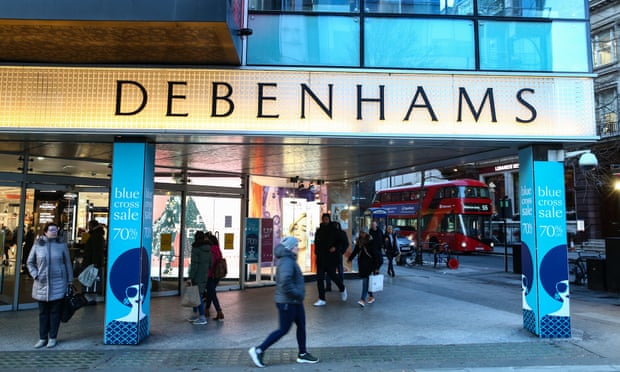 Debenhams is to press ahead with a financial restructure to cut its debts after a legal challenge backed by Mike Ashley’s Sports Direct drew to a close.

The restructure will result in at least £100m of the ailing department store chain’s £600m-plus of debt being converted to equity.

Stefaan Vansteenkiste, the chief executive of Debenhams, said: “This is great news for Debenhams. We can put the distraction of this litigation behind us and proceed with our plans to turn the business around. With committed investors, a strengthened board and a restructured balance sheet we have the platform from which to rebuild a sustainable business.”

As part of its battle for survival, the group has already closed 22 stores, 19 of which shut in January, resulting in more than 700 job losses. Another 28 of its remaining 141 stores are expected to close next year.

Debenhams was taken over by a group of its financial backers, including the US hedge funds Silver Point and Golden Tree, last year after falling into administration. It then used an insolvency process known as a company voluntary arrangement (CVA) to cull unprofitable sites and cut the rents. The company is also attempting to negotiate further rent cuts as it part of its bid for survival in an increasingly tough market.

The CVA plan was subject to a legal challenge amid pressure from Ashley, whose Sports Direct group’s investment of £150m was wiped out when Debenhams went into administration. Sports Direct, which was recently renamed Frasers Group, backed the legal challenge to the group’s CVA by a private Salford-based landlord owned by the family of the property investor Aubrey Weis, which owned six Debenhams properties. Ashley’s retail group was blocked from taking legal action itself.

The legal action was the latest gambit in Ashley’s battle with the department store. The administration and pre-pack deal with Debenhams’ lenders foiled an attempt by the Sports Direct boss to take control of the department store, which he wanted to merge with his House of Fraser group.

Debenhams and other British department stores are fighting for survival as shoppers shift to buying online or to spending on experiences such as holidays, digital services or takeaways, just as costs, including business rates and staff pay, rise.

Beales is in the process of closing all of its 23 stores after falling into administration in January, while House of Fraser has closed seven of its 59 stores and at least three more are set to close imminently.

Last week John Lewis warned that it was considering closing outlets after profits at its department stores dived by 65% to £40m.