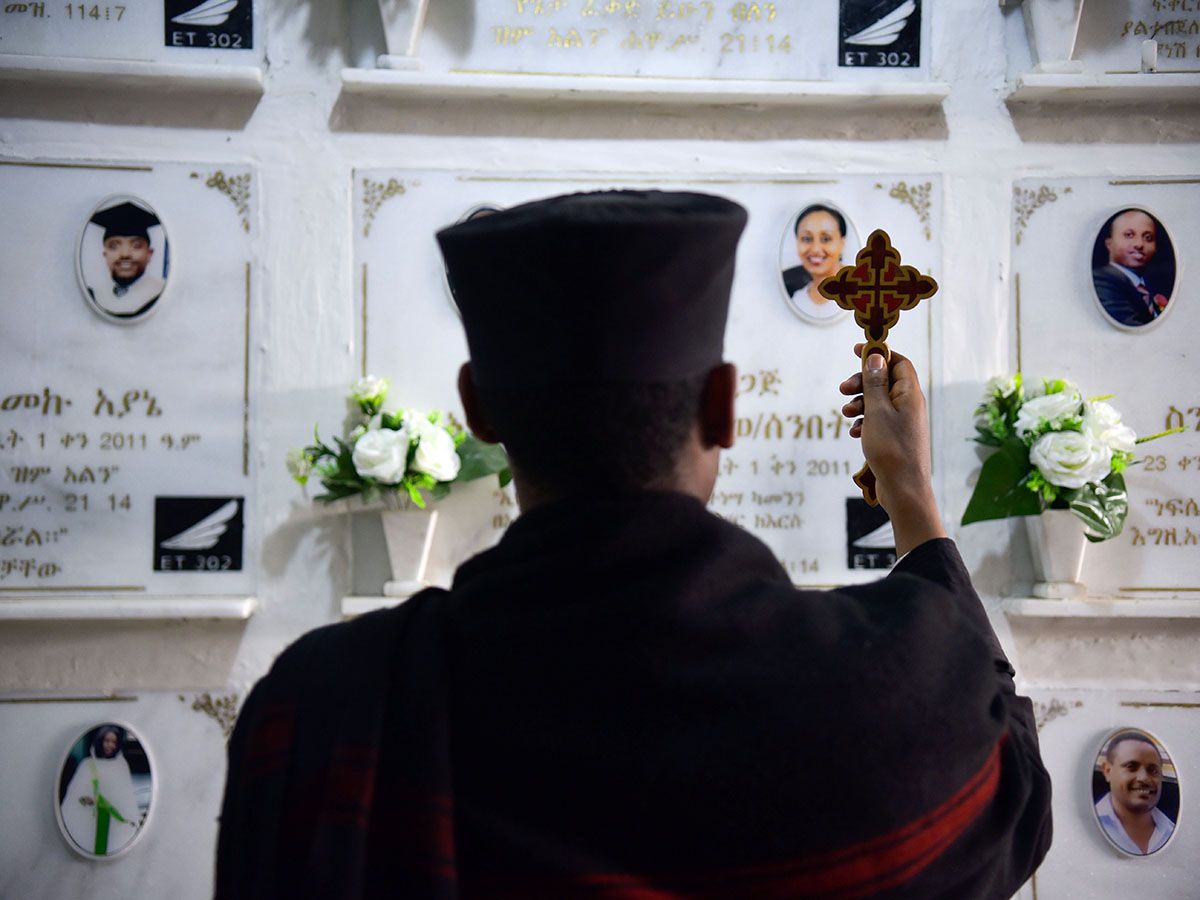 One year after losing his wife in the Boeing Co. 737 Max crash in Ethiopia, it’s the lack of information about what happened that is prolonging Bayihe Demissie’s grief.

This week, more than 500 family members of victims of the disaster will gather at the crash site outside the capital, Addis Ababa, to commemorate the first anniversary of the tragedy. As a families’ representative, Bayihe, 35, will seek to console many who are still waiting for answers about what brought down the Ethiopian Airlines Group flight moments after takeoff, killing all 157 people on board.

“It is not the money that heals you,” Bayihe, a father of a two-year-old boy said in an interview, while sobbing intermittently. “What the families want is clear information.”

Boeing provided $100 million to help the families and communities of those affected by the Ethiopian crash and an earlier disaster — a Lion Air flight operating a 737 Max jet carrying 189 passengers and crew that plunged into the Java Sea in 2018. In both cases, the safety of the plane came under scrutiny and led to the grounding of the entire fleet.

To date, relatives of more than 300 of the crash victims have received payouts of $144,500 per family, according to Kenneth Feinberg, the U.S. lawyer hired by Boeing to handle the distributions.

For answers about why the plane went down, the families may wait a while longer.

Ethiopian authorities plan to release an interim report this week that excludes information from “a lot” of investigations that are continuing, Amdye Ayalew, the nation’s chief crash investigator, said on Feb. 21. That means the statement will likely lack comprehensive findings about the roles played by Boeing, the U.S. Federal Aviation Administration or Ethiopian Airlines in the disaster. Investigators have tentatively concluded that the plane’s design caused the crash, Bloomberg reported on Friday.

Boeing is working to return the 737 Max to service as soon as mid-year, and try to resuscitate what was once the company’s best-selling jet. The FAA’s reputation is at stake as the main certifying body for the 737 Max. After the Indonesian crash was followed less than five months later by the one in Ethiopia, airline safety agencies from Europe to Asia broke ranks with the FAA and grounded the plane rather than wait for the U.S. to act.

Boeing declined to comment on the Ethiopia report when contacted.

The matter is as sensitive in Ethiopia, where the government has built its airline into Africa’s most-consistently profitable carrier and now aspires to develop a larger aviation hub. Ethiopia has vehemently defended its pilots as investigations continue.

In January, Ethiopian Airlines Chief Executive Officer Tewolde GebreMariam said the government plans to start building Africa’s largest airport within six months in Ethiopia at a cost of $5 billion. That would catapult Ethiopia into a global league, with capacity greater than London Heathrow, Europe’s busiest airport, and Dubai International, the world’s No. 1 for international flights.

The interim statement will build on a preliminary crash report released 3-1/2 weeks after the Ethiopian crash, and eventually will be supplanted by the final report. In the first review, investigators found the pilots were confronted by a cascade of malfunctions and alarms, seconds after the flight left Addis Ababa.

Added to the questions the victims’ family members have about the crash is the fact that some of them have yet to receive pledged financial assistance.

Ibrahim Mohamed from Kenya, which lost 32 citizens in the Ethiopia crash, is among those who haven’t received payment. As a result he’s not sure how he will support his last-born son who completed high school last year.

Mohamed’s elder son, Abdullahi Ibrahim Mohammed, was the family’s breadwinner. He died on the flight that was to bring him home to Nairobi, the Kenyan capital. That was the last leg of a trip from Saudi Arabia, where the 36-year-old worked at a dairy.

Mohammed’s three children are now supported by two uncles who work in Dubai and Qatar. “My sons buy food, medicines and cater for my treatment,” said Mohamed, who previously worked as a driver at a community Islam school. He didn’t say how much he expects to receive.

Families of each of the 346 victims of the Indonesian and Ethiopian crashes have been located, according to Feinberg. Funds from the $50 million pool for families are separate from any money obtained through personal injury claims against the planemaker. More than 100 lawsuits have been filed against Boeing for its role in the tragedies.

The logistical challenge of finding families scattered across 35 countries, subject to different secular and Sharia law, has complicated the process of determining rightful heirs, said Feinberg.

“How do you decide among competing heirs? How do you determine the money is safe so that it doesn’t get diverted to some foreign bank account?” Feinberg said by phone. “These were the daunting legal issues.”

Feinberg and his longtime associate, Camille Biros, are starting work on distributing another $50 million that Boeing has set aside for the communities affected by the accidents. Gaining consensus won’t be easy.

Over the next 10 months or so, his goal is to make sure the money goes to programs that will provide a “lasting memorial to those who perished in the accidents,” he said.

Mohamed is among the four relatives per family of the 157 ET302 flight victims expected in Ethiopia for the commemoration. There, he will meet with other families, including Bayihe, who will be at the forefront of not only trying to ensure pledged assistance is given, but also asking questions on what caused the disaster.

“We are still expecting information from the report,” said Bayihe. “For us, the more we stay in the process, the more it pains us.”

— With assistance by Alan Levin