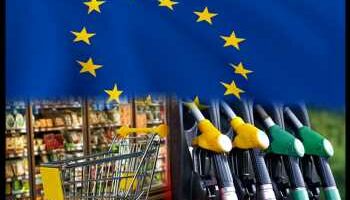 Eurozone consumer price inflation accelerated further in July to set a new high as prices of food rose at a faster pace, while energy price growth remained high despite easing, raising the prospect of a bigger interest rate hike from the European Central Bank in September.

Consumer price inflation climbed to a record 8.9 percent from 8.6 percent in June, preliminary data from Eurostat showed Friday. Economists had forecast the rate to remain unchanged.

The core inflation figure without considering energy and fresh food prices, shot up to 5.0 percent from 4.6 percent in June. Economists had forecast a 4.7 percent increase.

Energy prices continued to rise at the fastest pace among the main CPI components. That said, the rate of increase in energy prices slowed to 39.7 percent from 42.0 percent in June.

Compared to the previous month, consumer prices edged up 0.1 percent in July after a 0.8 percent rise in June. Economists were looking for a 0.1 percent fall.

Eurozone inflation is way above the ECB’s target of 2 percent, prompting rate-setters to raise interest rate by a bigger than expected 50 basis points on July 21. The hike was the first in eleven years.

The bank had already signaled a rate hike for September in its June policy session and had said that it could be bigger than the move in July if the macroeconomic outlook deteriorated.

Euro area logged a faster growth in the second quarter as France, Italy and Spain fared well despite deepening energy crisis and high inflation, while Germany failed to gain momentum.

“This confirms our view that despite rising core inflation, very little of this is demand-driven,” the ING economist said.

High input costs are likely to be the main driver behind the rapidly rising consumer prices with some service sectors like tourism perhaps being the exception, the economist added.

Thus, this makes the impact of the ECB’s rate hike on current inflation very limited, although it does add to a further cooling of demand in the euro area, Colijn said.

“With a recession looming and inflation reaching new highs, the question is how the ECB will respond to an economy which is already cooling down,” the economist said.

“Don’t rule out the ECB front-loading hikes, so 50 basis points in September is definitely still on the table.”