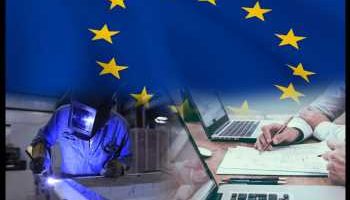 As the coronavirus outbreak intensified, the euro area private sector logged the sharpest decline on record in March, far exceeding the weakness seen at the height of the global financial crisis, survey results from IHS Markit showed Tuesday.

The flash composite output index fell to 31.4 in March from 51.6 in February. A score below 50 indicates contraction.

This was the largest monthly fall in activity since data first collected in July 1998. The score was below the forecast of 38.8.

The services sector was especially hard hit, notably within consumer-facing industries such as travel, tourism and restaurants. The services Purchasing Managers’ Index declined to 28.4 from 52.6 in February. The expected reading was 39.0.

The March PMI is indicative of GDP slumping at a quarterly rate of around 2 percent, and clearly there is scope for the downturn to intensify further as even more draconian policies to deal with the virus are potentially implemented in coming months, Chris Williamson, chief business economist at IHS Markit said.

Germany and France registered sharp contraction in March as governments took increasingly tough measures to contain the spread of the coronavirus.

French private sector activity shrank at the sharpest rate in nearly 22 years in March. The composite output index declined to a record low 30.2 in March from 51.9 in February. The reading was well below 39.8.

The reduction was broad-based, but faster at service providers who recorded their quickest decline since data collection began in May 1998.

Germany’s private sector logged its biggest contraction since 2009. The composite output index plunged to 37.2 in March from 50.7 in February. This was the lowest score since February 2009 and also below economists’ forecast of 40.6.

The sharp drop in activity was driven by the service sector, where businesses highlighted the impact of efforts to contain the spread of the covid-19.

There was a deepening downturn in the manufacturing sector as production decreased at the joint-fastest pace since early 2009. The manufacturing PMI came in at 45.7 in March, down from 48.0 in February and forecast of 39.6.

According to Markit, the rest of the euro area reported an even steeper decline than seen in both France and Germany.