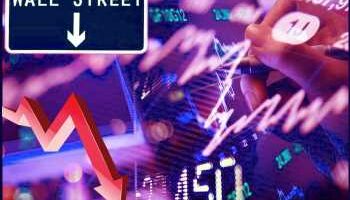 Reflecting a negative reaction to the Federal Reserve’s highly anticipated monetary policy announcement, stocks finished Wednesday’s trading mostly lower. With the drop on the day, the Nasdaq and the S&P 500 pulled back further off Monday’s record closing highs.

The weakness on Wall Street came as the Fed’s latest economic projections now point to an increase in interest rates in 2023.

The latest projections from Fed officials suggest interest rates will be increased to 0.6 percent in 2023 compared to previous projections indicating rates would remain at near-zero levels. Seven officials expect a rate hike as soon as 2022.

The forecast for higher rates in 2023 comes as the median estimate for GDP growth in the year was raised to 2.4 percent from the 2.2 percent forecast in March. Core consumer price inflation is still expected to increase by 2.1 percent in 2023.

“We had assumed the Fed would be a little more willing to let inflation rip in favor of ensuring a ‘broad and inclusive’ labor market recovery – and were only forecasting one 25bp rate hike,” said Paul Ashworth, Chief U.S. Economist at Capital Economics. “But we clearly misjudged the Fed’s evolving reaction function and tolerance for inflation.”

The new estimates also point to 7.0 percent GDP growth in 2021 versus the previously estimated 6.5 percent, with core consumer price inflation expected to reach 3.0 percent compared to the previously forecast 2.2 percent.

Meanwhile, the Fed’s accompanying statement was little changed from the April meeting, as the central bank said it plans to continue its bond purchases at a rate of at least $120 billion per month until “substantial further progress” has been made toward its policy goals.

Some analysts had been expecting the Fed to signal that it was beginning to think about tapering its asset purchases in light of the strength of the economic recovery and rising inflation.

In his post-meeting press conference, Fed Chair Jerome Powell said reaching the standard of “substantial further progress” is still “a ways off” and stressed the central bank would provide “advance notice” before making any changes to its asset purchases.

As widely expected, the Fed also maintained its target range for the federal funds rate at zero to 0.25 percent, where it has remained since March of 2020.

The Fed said it expects rates to remain at near-zero levels until labor market conditions have reached levels consistent with its assessments of maximum employment and inflation is on track to moderately exceed 2 percent for some time.

Significant weakness also emerged among gold stocks, as reflected by the 1.8 percent drop by the NYSE Arca Gold Bugs Index. The index slid to its lowest closing level in over a month, as the price of gold fell sharply in electronic trading.

Interest rate-sensitive utilities stocks also came under pressure on the day, resulting in a 1.6 percent decline by the Dow Jones Utility Average.

Computer hardware, housing, chemical and transportation stocks also saw notable weakness, moving lower along with most of the other major sectors.

Meanwhile, the major European markets turned in a mixed performance on the day. While the German DAX Index edged down by 0.1 percent, the French CAC 40 Index and the U.K.’s FTSE 100 Index both crept up by 0.2 percent.

In the bond market, treasuries moved sharply lower in reaction to the Fed announcement. As a result, the yield on the benchmark ten-year note, which moves opposite of its price, advanced 7 basis points to 1.569 percent.

Trading on Thursday may continue to be impacted by reaction to the Fed announcement, which could overshadow the Labor Department’s latest report on weekly jobless claims.