Gupta's suggestion for kids in schools without mask mandate

(CNN)For young children, the pandemic comes at a crucial time for developing skills important for empathy, safety and more — a phase that some parents worry will be impaired by mask-wearing.

“There are sensitive periods in early childhood development in which language development and emotional development are really rapidly developing for the first few years of life,” said Ashley Ruba, a postdoctoral researcher in the University of Wisconsin-Madison’s Child Emotion Lab.
Being able to use others’ verbal or facial cues to figure out how someone is feeling or pick up on safe or dangerous aspects of environments and people is a critical task for young kids, Ruba added.

Concerns that wearing masks might interfere with these natural learning experiences and communication skills have been studied before the pandemic.

When children ages 3 to 8 viewed faces covered with face masks, they didn’t show any impairment in classifying the expressions, according to a 2012 study published in the journal Cognition. This suggested that children under 9 preferred studying the eyes area even when they could see full faces, the researchers wrote. 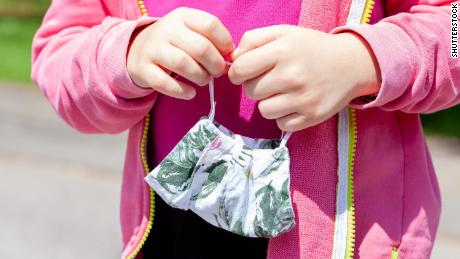 During the pandemic, Ruba, too, has studied whether masks affected children’s abilities to understand facial expressions.
Ruba and her coauthor showed more than 80 children ages 7 to 13 photos of faces that were unobstructed, covered by a surgical mask or wearing sunglasses. The faces displayed sadness, anger or fear.
When asked to assign one of six emotions to each face, the children were correct about uncovered faces 66% of the time, the researchers found. When faces were covered by masks, the children had trouble but were able to correctly identify sadness roughly 28% of the time, anger 27% and fear 18%, which was more than the odds (about 17%) of correctly guessing one emotion from the six labels.
Given these findings and children’s innate flexibility in adapting to challenges or catching up, some experts aren’t suspecting any long-term effects of mask-wearing on children’s development.
“I think once masks are gone or almost gone, whatever impact it has, we’ll quickly recover,” said Dr. Hugh Bases, a clinical associate professor of pediatrics at Hassenfeld Children’s Hospital at NYU Langone Health. 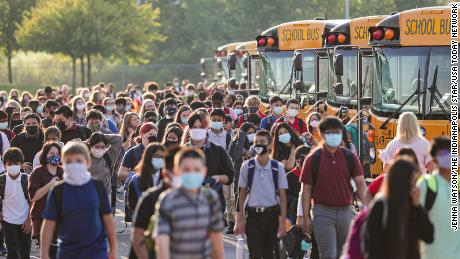 If children’s “social and language development is a little bit slower, which it could be, balancing that with the risk of someone dying of the coronavirus — when all the evidence we have indicates that they will catch up and they will be OK — just doesn’t seem worth it to me,” said Amy Learmonth, a professor of psychology at William Paterson University in New Jersey.
“I look at the numbers of people who have died in this country, and it’s horrifying.”

Differences among ages and learning styles

From birth, babies learn how to communicate by observing their loved ones’ faces, mouths and voices and trying to respond, according to the American Academy of Pediatrics.
“What your 6-year-old is learning is about things like sarcasm and meaning. What your 1-year-old is learning is, like, that thing with four legs that runs around the house is called ‘dog,’ ” Learmonth said.
The US Centers for Disease Control and Prevention hasn’t recommended that children younger than 2 wear masks. For children younger than 18 months, learning how to communicate through visual cues is “probably more important because learning a new word when you don’t have any is complicated,” Learmonth added. 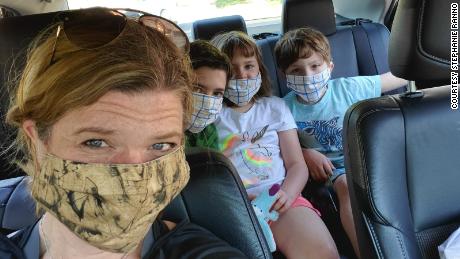 If you’re worried about your child’s lingual and social development during the pandemic, just ensure you set aside time to talk with your child face-to-face when you’re at home and not wearing a mask, Learmonth suggested.
“For most of our kids, as long as they’re getting interaction with their parents in the morning and in the evening, they’re going to be OK.” These interactions could be during baths, playtime or meals.
Additionally, “conversation often is more than just the actual verbal content,” Bases said.
Other elements such as vocal inflection or physical gestures not obscured by masks can add to the context that helps children develop communication skills. Young children, including those who are visually impaired, will use other clues or senses to understand and learn language, according to AAP.
One concern, however, is for kids whose lingual or social development is atypical, Learmonth said. 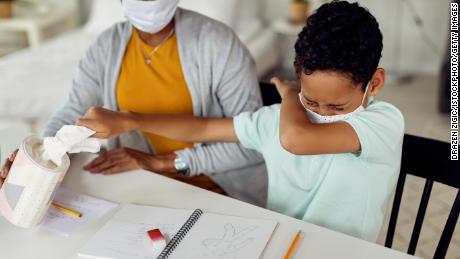 “Anyone who is just a little behind in language development or a little behind in understanding social cues — what concerns me is that they will fall further behind,” she added.
“Because unlike a typically developing child who is probably all right with only four or five hours of full-face interaction a day, a child who’s struggling is going to need all they can get and more,” Learmonth said.

When parents can help

To better communicate with a child while wearing a mask, the AAP recommends adults get the child’s attention before speaking, face the child directly with no physical or noise barriers in the way and speak slowly and louder, but not shouting, if needed.
You can add contextual information to your words by using your hands, body language and tone of voice. Depending on the response, ask whether your child understood and repeat yourself if necessary.
If you have concerns about your child’s language development skills now or later, seek evaluation from certified speech-language pathologists. Some of them are still practicing in-person while wearing clear masks or virtually, according to the AAP.
“As speech-language pathologists working with children with communication disorders, our transition to the new normal of communicating with face masks was quick and smooth,” wrote India-based speech-language pathologists Divya Swaminathan and Shoba Meera in an October 2020 article.

Sign up here to get The Results Are In with Dr. Sanjay Gupta every Tuesday from the CNN Health team.

The “greater good” of protecting one another, teachers and families “far outweighs the potential theoretical issue that might come up as a result of wearing face masks,” Bases said.

“Kids adjust, they adapt, and when they don’t have to wear them, they’ll adapt again. … It’s a very fluid, dynamic kind of learning. And development is obviously not linear. There’s ups and downs, even in days before face masks.”
Another encouragement is that children living in cultures where face coverings are the norm still learn to communicate, Learmonth said. “There are lots of ways across the world to speak to small children, and they all work.”
Source: Read Full Article