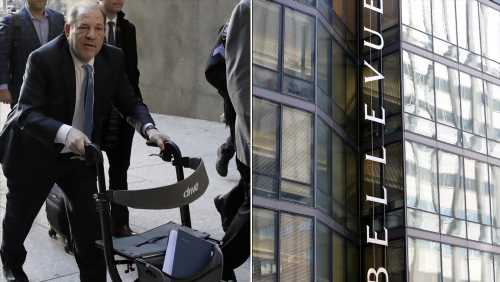 Once again, Harvey Weinstein has ended up in hospital after receiving bad news in court.

Hours after being sentenced today to 23 yers in prison for multiple sex crimes by a New York State Supreme Court judge, the disgraced producer is back in Manhattan’s Bellevue Hospital. This time 67-year old and wheelchair bound Weinstein was suffering from chest pains and medical staff at Rikers Island decided it was best he go to the oldest public hospital in America, just six days after he left that very facility.

“Mr. Weinstein is being taken to Bellevue Hospital Ward to treat him for his ongoing heart problems and chest pains,” a spokesperson for the Oscar winning producer told Deadline.

“In addition a complication related to his back surgery is going to be evaluated,” they added. “We are incredibly appreciative of the level of care and attention the NYC Dept. of Corrections is showing regarding Mr. Weinstein’s medical condition and we are hopeful he will be held overnight for observation given his recent heart procedure less than a week ago and his ongoing medical issues.”

Admitted to the hospital almost immediately after being convicted on by a jury of two of five felony charges on February 24, Weinstein just got out of Bellevue on March 5. Placed in Rikers’ vast North Infirmary Command, the Pulp Fiction producer had undergone mild surgery just a few days beforehand for a blockage in his heart.

Apparently that wasn’t the success it was assumed to be.

Weinstein may be suffering pains of another type soon as officials in L.A. have now started the extradition process to bring him out West to face rape and other sex crimes charges. Made public by L.A. County D.A. Jackie Lacey on January 6, the first day of the NYC trial, those charges could see Weinstein imprisoned for 27 years if found guilty.

Perhaps he’ll be spending some time at Cedars-Sinai then.