Here's how KitKats are made

New York (CNN Business)Breaking off a piece of that vegan KitKat bar is now a reality.

Nestlé is launching a non-dairy version of the popular candy bar, called KitKat V. The Swiss company is jumping on the the plant-based alternative food trend. Nestlé promises the new candy still has the “perfect balance between crispy wafer and smooth chocolate.”
KitKat V ditches dairy milk, which is used for its regular KitKats, for a rice-based alternative in addition to its new sustainable cocoa, according to Bloomberg. The new bar will start going on sale later this year across several countries at select retailers before expanding worldwide. 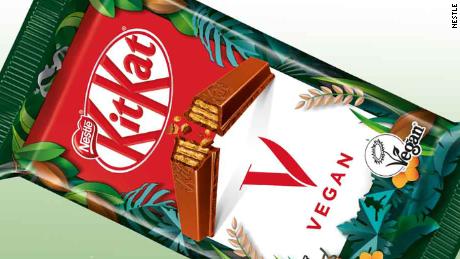 “Taste was a key factor when developing the plant-based chocolate for our new vegan KitKat,” said Louise Barrett, head of the Nestlé Confectionery Product Technology Center, said in a statement. “We used our expertise in ingredients, together with a test and learn approach, to create a delicious vegan alternative to our original chocolate KitKat.”
Plant-based food is extending being meat and milk. In 2019, Mars launched a line of vegan chocolate bars as a way to attract eaters that want to reduce their meat and dairy intake for health and environmental reasons. Other manufacturers, such as Lindt and Cadbury, have also recently debuted vegan candy.

The trend, according to Alexander von Maillot, Nestlé’s head of confectionery, continues to grow.
“There is a quiet food revolution underway that is changing how people eat. We want to be at the forefront of that, championing the discovery of plant-based food and beverages,” he said in the statement.
Source: Read Full Article