He’s moved on from hoodies, but Jason Sudeikis continues to push the fashion envelope for relaxed apparel during virtual award shows.

At Sunday’s SAG Awards, Sudeikis accepted the award for male actor in a comedy series wearing a sweater saying “My Body My Choice.” According to Us Weekly,  the $1,100 Gucci top was designed to champion “support of reproductive rights.”

The sweater follows the social media attention that started with Sudeikis winning a Golden Globe in February for the “Ted Lasso” role. He accepted the award at 2:30 a.m. in England wearing a tie dye hoodie. 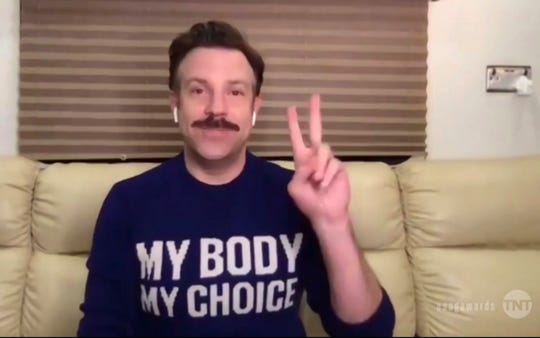 Jason Sudeikis accepts the award for outstanding performance by a male actor in a comedy series for "Ted Lasso" during the 27th annual Screen Actors Guild Awards. (Photo: AP)

The hoodie even earned a quip from co-host Tina Fey later in the Golden Globes broadcast. “If anybody wants to know where they can get Jason Sudeikis’ hoodie, go to NBC.com/globesfashion,” she cracked.

“I think you have to look back to Audrey Hepburn for ‘Funny Face.’ She also wore a hoodie. No, that’s not true,” hejoked during the virtual backstage at the Globes.

There are some great ensembles out there, but we believe in the #TedLasso team. #SAGAwardspic.twitter.com/7fCrNpx1YR

Winning at the Critics’ Choice Awards last month, Sudeikis wore a sweatshirt featuring the emblem of the fictional high school from director and ex Olivia Wilde’s film “Booksmart”  Wilde congratulated Sudeikis and the “Ted Lasso” team on Twitter saying, “I hope this means we all keep wearing hoodies when the ceremonies are in person next year.”

Congrats to Jason and the entire Ted Lasso family on your @CriticsChoice wins! @jasonsudeikis@hanwaddingham@brendanhunting@joekellyjk47@VDOOZER! So happy for you guys. I hope this means we all keep wearing hoodies when the ceremonies are in person next year. 🙌

Sunday’s SAG Awards poked fun at the hoodie hubbub in the “Ted Lasso” opening that featured Sudeikis’ American coach pumping up his British professional soccer team. During the skit, star striker Jamie Tartt (Phil Dunster), who was sent off to another team in the middle of the first season, returns to the locker room wearing a hooded sweatshirt.

“Who wears a hoodie to an awards show?” kit manager Nathan Shelley (Nick Mohammed) asks Coach Beard (Brendan Hunt), who whispers back, “He’s been going through some stuff.”