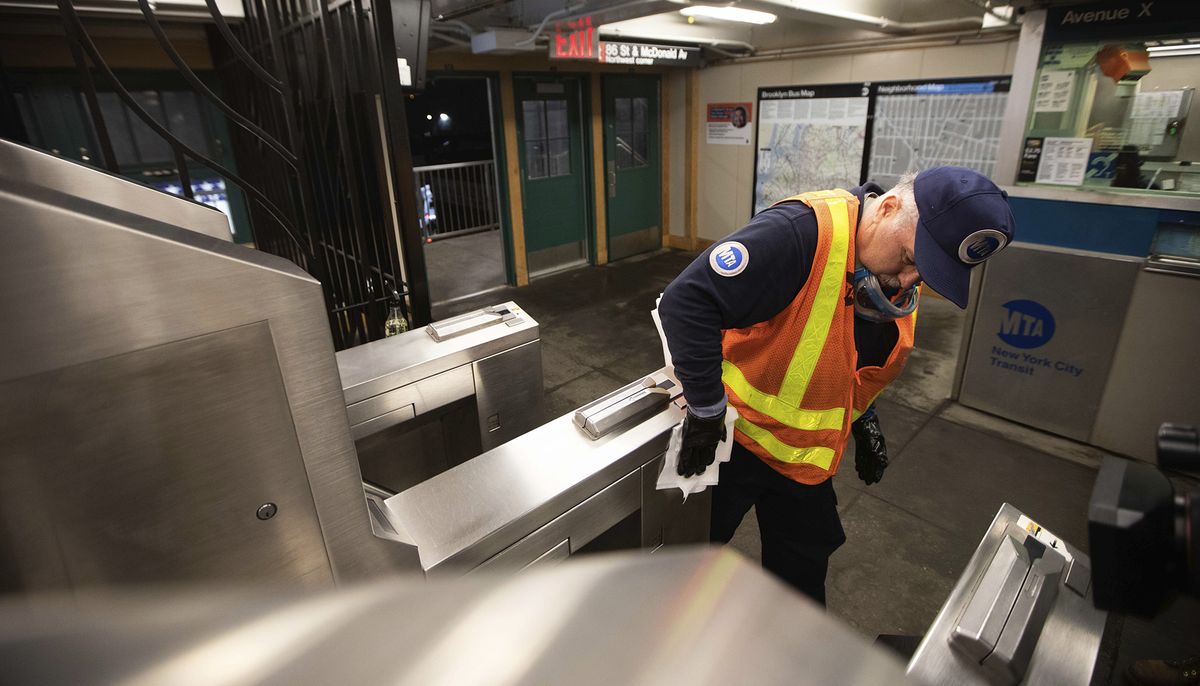 With coronavirus cases spreading in the U.S., lawmakers and companies are grappling with whether to urge more workers to log in from home—and what to do for those employees who only get paid if they show up at their workplaces.

About 42 million of 144 million U.S. workers could do their jobs at home in 2018, or just 29% of the workforce, according to the U.S. Bureau of Labor Statistics. For the rest, particularly people of color and low-paid hourly workers, there are few options and even fewer benefits. About a quarter of Americans lack paid time off, and the percentage is much higher among the industries with few options for remote work, including retailers and transportation.

Making matters worse, the U.S. is one of the only industrialized countries that doesn’t require paid sick leave. China, for example, does have a national policy. That meant employers were legally required to pay workers most of their salary when the country shuttered factories and retail establishments to curb the spread of the virus.

That means all the restaurants, chain stores and delivery services in the U.S. need to be formulating plans for how to hold on to workers in a tight job market even if operations are paused or even just slowed. For every big office building that encourages workers to stay home, as Twitter Inc. and JPMorgan Chase & Co. have done, there’s an ecosystem of shops, bars and restaurants that depends on their employees for traffic and might respond to a slowdown by cutting a shift or two.

“There isn’t a tele-burger, and there isn’t a tele-Amazon either,” said Ellen Bravo, co-director of Family Values @ Work, which advocates for state and local paid leave laws in the absence of a federal law. “There’s human beings who deliver those packages.”

The challenge is becoming more pressing as big cities such as New York and Seattle report more and more cases. On Wednesday, the case count climbed to six in the New York City area, including four in a single family, leading to the closing of a local college and a school in the Bronx.

About 3% of workers who didn’t graduate from high school said they were able to work remotely, compared with almost half of workers with a bachelor’s degree or higher, according to BLS data. Only 20% of black employees and 16% of Hispanic and Latino employees have the option to work at home.

“As so often is the case, this public health threat will have hidden and higher costs for low-wage workers,” Senator Patty Murray, a Democrat from Washington state, said Tuesday at a hearing to discuss the economic impact of the virus, which has hit her state hard. “When those people’s basics needs aren’t met, they cannot make choices to protect themselves, which means they can’t make choices that best protect others, too.”

In Murray’s state, the outbreak has already pushed social-distancing measures such as school closings and a slew of canceled events. Workers in Washington are being told to stay home for two weeks if they are sick, she said. But there aren’t enough testing kits, so low-wage employees without sick leave have the most to lose if they stay home. And that’s on top of many not having adequate health insurance.

In the U.S., the safety nets for workers are left mainly to the states. So far only 13 have some form of paid leave requirements and another 19 jurisdictions have adopted sick-day regulations, said Bravo from Family Values @ Work. Of those 32, about half have a specific provision that allows residents to use sick days to stay home in a public health emergency, even if they are not sick, Bravo said.

Companies have realized they need to make changes. About 60% of 158 firms surveyed last week said they have or will increase the flexibility for remote work, said Jeff Levin-Scherz, national co-leader of the health care practice at Willis Towers Watson, who advises companies on health care solutions and risks.

But that wouldn’t help Mendy Hughes, a 45-year-old part-time cashier at a Walmart store in Malvern, Arkansas, about an hour south of Little Rock. The mother of four, with three still living at home, said she can’t afford to take days off without pay and has limited paid time off. She’s a member of the Walmart watchdog group United for Respect, which said in a statement Tuesday that many Walmart workers are going to work sick because of those concerns and asked the world’s largest retailer to modify its sick-time rules as the virus spreads. Her concerns were echoed by several other self-described Walmart employees on a section of the social media site Reddit where Walmart employees discuss topics of interest and concerns.

“We want to assure you that we continue to monitor this situation, and our focus remains on the health and welfare of our associates, our customers and our partners around the world,” Walmart said in a statement. The company added that it offers options for taking paid leave for employees, including part-timers. The company also said that it can waive absences in situations that warrant it, such as a flu or a natural disaster.

Hughes, a single mother, still is convinced that she’d have to show up to work if she came down with symptoms.

— With assistance by Alexandre Tanzi, Keshia Clukey, and Jinshan Hong