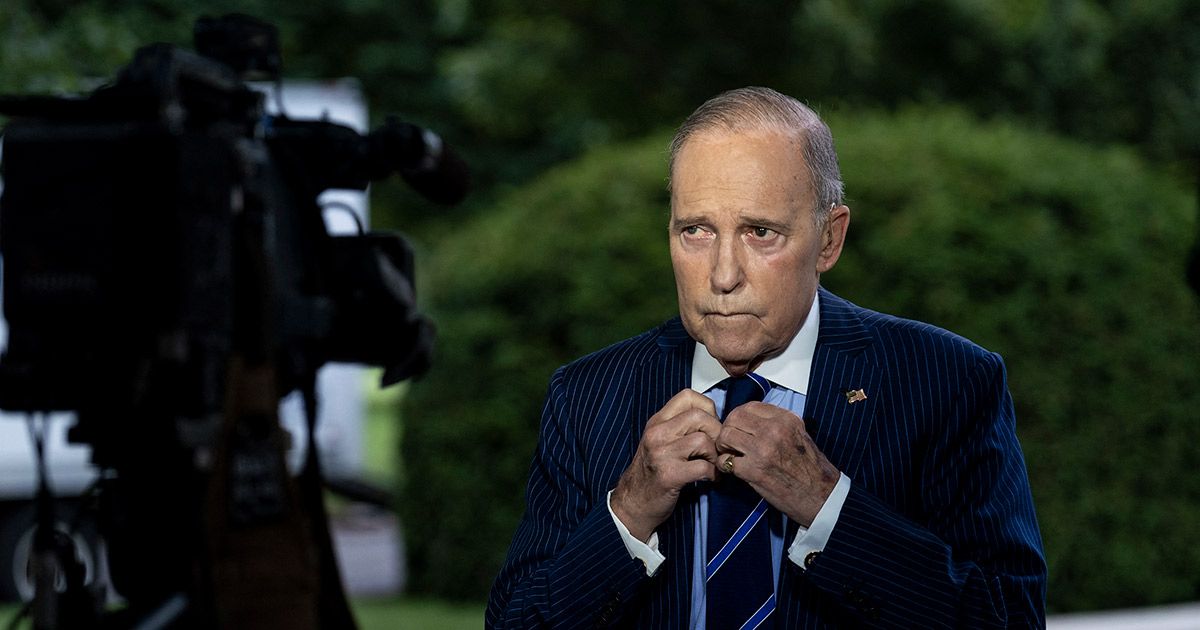 It’s shaping up to be a doozy of a Tuesday morning. At 10 a.m. on March 3, the U.S. Federal Reserve announces its first emergency rate cut since the global financial crisis. Soon after, in a hastily called press conference, Fed Chair Jerome Powell will tell reporters—and investors watching from afar who seem to be quickly losing faith in the healing powers of monetary policy—that responding to what’s now a quasi-global coronavirus outbreak and its economic fallout will require a “multifaceted” response from health and fiscal authorities.

A few hours later, the 10-year Treasury will set off alarms as its yield slips below 1% for the first time, and President Trump’s preferred gauge of his performance, the Dow Jones Industrial Average, will extend its most miserable streak since 2008.

As it all unfolds, Larry Kudlow is installed at the dining room table that serves as a desk in his second-floor West Wing office. He remains defiantly optimistic—and resistant to the idea that the unfolding health crisis demands a greater economic response from an administration for which he’s become the camera-ready, genial face.

“We’re not there yet. First of all, the economy is in good shape,” says Kudlow, who heads the president’s National Economic Council, before rattling off a flurry of recent positive statistics. “I am aware that there are going to be some speed bumps coming. But in talking to the president about this, a) We’re not going to panic over this at all, because the economy is sound, and we will get through this, and then the virus will end. Secondly, frankly, short-term fixes never work. You know, these temporary tax cuts or rebates and things of that sort. You look at the history—I mean I’ve lived with this for decades—they just never work.”

On the wall behind him hangs a framed copy of a 2018 Kudlow speech headlined “The Trump Economy,” overwritten with the unmistakable black Sharpie autograph of the president and the declaration “Larry, So great!” On the wall facing him is a gilt-framed canvas of a vase holding a bouquet painstakingly rendered by his wife, Judy, a realist painter.

There are printouts of emails and briefing binders on the table before him and newspapers on the coffee table across the room. But nowhere in sight is a television that might relay investors’ skeptical reaction to the Fed’s emergency rate cut. Or a computer to track the indexes trending down.

The only screens on view are a pair of smartphones. When one buzzes, Kudlow picks up. It’s Treasury Secretary Steven Mnuchin. Powell has just held a press conference, he informs Kudlow, who seems unaware: “Was it a presser this morning? I didn’t see.” An aide chimes in: “He said the economy is strong.” Kudlow tells Mnuchin, “He stayed with our line: The market is fundamentally strong.”

“He’s a good friend and policy ally,” Kudlow says of Mnuchin after the brief exchange. In an age of manic news cycles and whipsawing markets, this is how the 72-year-old Kudlow works. He’s an old-world, social-media-free optimist in pinstripes who describes almost everybody as a “friend” or “pal,” even when he’s delivering a political jab. “Biden? Bernie? Biden is Bernie lite as far as I can tell. I’m disappointed in Joe, who was a friend of mine,” he says as he ruminates on the economic debate taking shape before November’s presidential election.

As Trump squares up for a reelection bid that leans heavily on an economic expansion that, until recently, looked unstoppable, Kudlow occupies a special place in the administration. He’s waged economic policy battles, pushing for a truce in the trade war with China, and taken a stand against such ideas as intervening in currency markets or imposing tariffs on cars imported from Europe. But his most important role has been that of market magician.

The president praised his powers at the January signing of a “phase one” trade deal with China. “We had a day where the market went down $1 trillion. Think of that,” Trump told a gathering of chief executives and luminaries such as Henry Kissinger. “But Larry Kudlow went out onto the beautiful lawns of the White House,” the president said. “And he started talking. And by the time he finished, I said, ‘You just made a trillion dollars. A trillion.’ Because the market went up like 250 points. I said, ‘Larry, what the hell did you say?’ ”

Kudlow, a former TV host on CNBC, is more humble about his abilities. “I appreciate President Trump’s support, but my influence on markets is vastly overrated in this building and anyplace else.”

Kudlow is also conscious that his efforts to talk up the markets—especially in recent days as he’s repeatedly urged investors to “buy the dip”—have left him open to criticism from those who say the White House shouldn’t be offering investment advice to the American people.

“It probably hurts his credibility to have been in that situation in which he is talking about people should go out and buy and we have literally the worst week ever,” says Tony Fratto, who served as a White House and Treasury Department spokesman during the administration of President George W. Bush. There’s a good reason presidents avoid linking their fortunes to financial markets, as Trump explicitly has, says Fratto: “They’re outside of your control. They’re very fickle. And you don’t want that as the measuring stick for how you are doing.”

Peter Borish, chief strategist at Quad Capital, says Kudlow’s positivity has become a sort of trap. “It’s a no win situation,” he says. “He needs to be an optimist because people will discount anything he says that is positive and will accent what is negative.”

Kudlow says all he’s doing is trying to keep investors focused on the big picture. “I’m there just to remind folks of President Trump’s growth policies and our generally constructive long-term outlook,” he says. “The seesaw was so crowded at the bottom. I was just trying to say things are more balanced than that.”

Kudlow says he can’t help but be upbeat. “Pessimism has never truly set well with me; as though bound by a shirt collar that was too heavily starched, it made me feel uneasy and irascible,” he wrote in the introduction to his 1997 book, American Abundance, a collection of columns and speeches that, like much of his writing, lays out the case for supply-side tenets including tax cuts, deregulation, free trade, and a gold anchor for the dollar.

His optimism is a trait he acquired in the aftermath of what he calls “my personal crash and burn.” In 1994, Kudlow, who’d risen rapidly from his first job as a staff economist at the New York Fed to Wall Street, then to a post in the Reagan administration, was forced out from his job as chief economist at investment bank Bear Stearns for abusing alcohol and cocaine. His going public that year in a New York Times article, in which he ascribed his addiction to the pressures and travel that came with the job, was followed quickly by a relapse; his firing from the National Review, where he’d landed as an economics commentator; and a five-month stint in a Minnesota rehab clinic, where he deepened what had been a budding interest in Catholicism.

Born into a middle-class Jewish family in New Jersey, Kudlow was baptized in 1997 into not just the Roman Catholic Church, but also a community of conservative Catholics of which he remains a proud member. The ceremony at St. Thomas More Church on New York’s Upper East Side was attended by his former boss at the National Review, William F. Buckley, and Wall Street Journal columnist Peggy Noonan. Kudlow, who’s been sober for 25 years, says he was drawn to Catholicism by its basic idea of rebirth: “The message of salvation, redemption, and good orderly direction attracted me.”

Kudlow’s relentless optimism has occasionally made him a target of scorn from other economists. In mid-2005 he derided those warning of a coming crash in housing prices as “bubbleheads.” In December 2007 he dismissed talk of a recession just as the Great Recession that accompanied the global financial crisis was beginning. “I’ve had good forecasts and not so good forecasts,” he says.

Like other successful senior officials in the administration, the self-described happy warrior has learned not to try to manage or control Trump. An avowed free-trader, Kudlow doesn’t hide the policy disagreements he’s had with the president. He still opposes the steel tariffs that triggered the resignation of his predecessor, Gary Cohn, he says. And he continues to lobby internally against auto tariffs, which Trump has threatened to impose on Europe if it doesn’t agree to some sort of trade deal.

During a recent meeting with Trump and other cabinet-level officials in which those tariffs came up, Kudlow says, he proposed that for “at least a year” the administration should “have some tariff tranquility” and focus on implementing Trump’s deal with China and his replacement for Nafta, the United States-Mexico-Canada Agreement. “Several cabinet members said, ‘Yeah, Larry’s right,’ ” he says. “And the president kind of looked up and had a smile on his face. It registered. It registered. I’m not tying his hands. He’s the boss. But the thought registered. Let’s let things calm down.”

Whether Kudlow’s current optimism about the U.S. economy and markets and their ability to weather a budding pandemic will stand the test of time is unclear, of course. Some Wall Street veterans who remember his days at Bear Stearns say that, though he didn’t have formal training in economics and was generally pooh-poohed by the Ph.D. crowd, Kudlow understood markets. One longtime investor says that when he was a junior analyst at a major U.S. bank, his boss swapped out the bank’s own research and gave him Kudlow’s to read instead.

Kudlow insists he’s just taking the long-term view on markets and the economy. The Fed may have been moved to announce an emergency cut, but he’s confident the U.S. economy will soldier on.

So, too, will he. Kudlow recalls that sitting in a green room with Trump at the World Economic Forum earlier this year, discussions among the president and his staff moved to whether one cabinet official might be too tired to continue in his role. “Somebody said, ‘Everybody is tired.’ I just looked up and said, ‘Well, I’m not tired.’ And I’m the oldest guy there except for him [Trump]. And he [Trump] said, ‘Yeah, I’ve given you a second life.’ ”

Kudlow has navigated health problems during his time at the White House, including a heart attack and a hip replacement, though he says he’s now well enough to have resumed playing tennis every Sunday. He expects to stay in the administration until the end of this year but hints it’s unlikely he’ll return for a second term. That doesn’t mean he plans to retire. “My last rites will be at a desk or a TV studio somewhere,” he says. —With Katherine Burton and Jennifer Jacobs