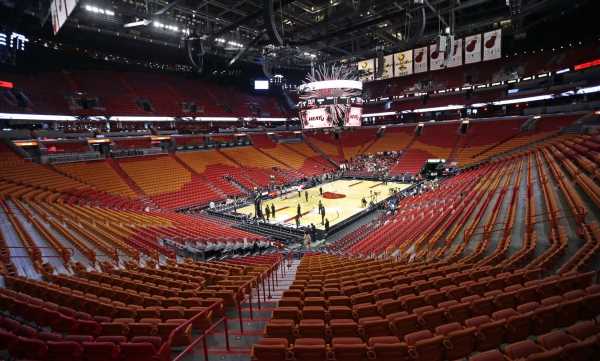 NBA Owners Respond to Suspended Season with Shock But Support

Owners and league executives from the National Basketball Association convened via conference call Wednesday afternoon to discuss the impact of the coronavirus pandemic.

Playing in front of thousands of fans seemed like it wouldn’t be an option much longer. Games in empty arenas was the next-best move, allowing the league to make good on its obligations to Turner and Walt Disney, which pay a combined $2.7 billion a year to broadcast NBA games.

Then a player tested positive for the illness. Convening even the essential participants — players, coaches, officials, trainers — for games behind closed doors no longer seemed wise, and the NBA suspended its regular season until further notice.

The dramatic decision ran counter to what many U.S. sports leagues had been trying to do during the outbreak: maintain business as usual. It raises a bevy of unanswered questions: Will TV networks get refunds? And what about ticket holders and sponsors, and arena lease agreements? ESPN declined to comment.

Two owners immediately rallied behind the decision. Dallas Mavericks owner Mark Cuban, who was captured on camera learning about the cancellation from his court-side seats, said, “This is bigger than basketball.”

His Milwaukee Bucks counterpart, Marc Lasry, co-founder of Avenue Capital, said, “It’s the right thing to do for our fans and the players.”

In its labor agreement, the league has terms that share some of the owners’ pain with the players. Each player on the roster could forfeit about 1% of his pay per game canceled. So the Los Angeles Lakers, for instance, would withhold about $404,000 per canceled game from LeBron James. The rank-and-file may experience more of a pinch than stars like James, who is paid about $37.4 million.

The clause in the NBA labor deal was negotiated after the Sept. 11 attacks, and includes events like war, sabotage, terrorism, natural disasters, explosions, government orders and, yes, epidemics.

“For the first time in the modern era, the NBA realizes the well-being of its players and fans is more valuable than the short-term wealth maximization of its owners,” said Rick Burton, a former commissioner of the Australian Basketball League and ex-chief marketing officer for the U.S. Olympic Committee.

TV executives should also set aside concerns about dollars and ratings, said David Levy, who negotiated a number of broadcast deals with the NBA in a 30-year career at Turner.

“You can’t think about revenues and profits,” said Levy, who also had a short stint as chief executive officer of the Brooklyn Nets. “The NBA will be back and we will work with our partner to become whole.”

The development capped an already dramatic day for the U.S. sports world, with the NCAA deciding to bar fans from the March Madness college basketball tournament, and Major League Baseball and National Hockey Leagues shuffling schedules to cope with the outbreak.

Russ Granik spent 22 years as the NBA’s deputy commissioner, retiring in 2006. He said the league did the most responsible thing in a difficult situation.

“If the numbers get to be as bad as some experts are positing, I expect other things will soon be canceled,” he said, specifically mentioning the Tokyo Olympics. “And the loss of sports events may eventually come to look like a relatively insignificant part of the national crisis.”