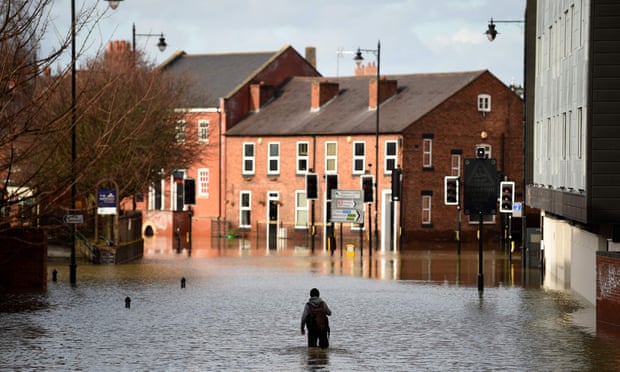 The cost of repairing homes and businesses damaged in storms Dennis and Ciara is expected to top £360m, according to the Association of British Insurers (ABI).

Initial estimates of the damage caused by the storms that battered the UK in February found that 82,000 people had made claims for flood or wind damage. The average household flood damage claim was estimated at £32,000.

Almost £8m has already been paid out in emergency funds to get homeowners and businesses back on track in the immediate aftermath of the flooding and wind damage, including covering the cost of temporary accommodation when homes were uninhabitable.

The floods caused an estimated £214m of damage to 3,350 homes and 1,500 business properties. Included in the flooding bill was the £21.7m bill for replacing or repairing about 3,600 washed-away or water-damaged cars and other motor vehicles.

The ABI said the repair bill caused by storms Dennis and Ciara was the highest since three storms – Desmond, Eva and Frank – hit the UK in quick succession in December 2015, causing £1.3bn of damage.

It also put the cost of flooding in parts of south Yorkshire and the Midlands in November last year at more than £110m.

“With some properties still underwater, making emergency payments and arranging emergency alternative temporary accommodation or trading premises is very much a live issue.

“When the flood waters recede, the hard work begins. Insurers and loss adjusters will continue working around the clock to ensure homes and businesses are fully dried out, so that repairs can start as soon as possible, and people can get their lives back together.”

Storm Dennis, which hit on 15 and 16 February, was felt from the Scottish Highlands to the Cornish coast and large parts of Wales and Northern Ireland. It triggered a record-breaking number of Environment Agency flood warnings and alerts in England. The storm is believed to have caused the worst winter floods in recent times, partly because the ground was still saturated following Storm Ciara a week earlier.

Earlier this week, the insurance giant Aviva said it faced a £70m bill from the recent UK storms. Direct Line Group said the UK’s winter storms were set to cost it at least £35m.