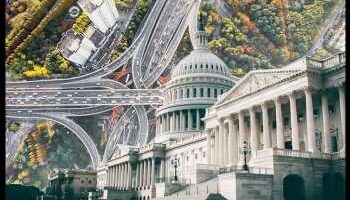 The Senate voted in favor of advancing the bipartisan infrastructure package deal, seen as a political victory for President Joe Biden’s Build Back Better Agenda.

The nearly $1 trillion Infrastructure Bill was passed Wednesday by a 67-32 vote, winning the support of 17 Republican Senators, setting the stage for a debate in the upper chamber.

“We are proud to announce we have reached a bipartisan agreement on our proposal to make the strongest investment in America’s critical infrastructure in a generation,” said a bipartisan statement. “Our plan will create good-paying jobs in communities across our country without raising taxes,” said 21 senators from both parties.

More than half of the bill — $550 billion — includes new federal investment in America’s infrastructure.

Thanking the bipartisan group for working together to finalize the deal, President Joe Biden said, “This deal signals to the world that our democracy can function, deliver, and do big things. As we did with the transcontinental railroad and the interstate highway, we will once again transform America and propel us into the future.

He described the gargantuan package as the most significant long-term investment in U.S. infrastructure and competitiveness in nearly a century.

Biden noted that the huge investment is not made at the cost of low and middle income groups in the country. “We’re going to do it without raising taxes by one cent on people making less than $400,000 a year — no gas tax increase and no fee on electric vehicles.”

According to a White House fact sheet, these investments will add around 2 million jobs per year over the course of the decade, while accelerating America’s path to full employment and increasing labor force participation.

The Bipartisan Infrastructure Deal will invest $110 billion of new funds for roads, bridges, and major projects. It is estimated that 173,000 miles of U.S. highways and major roads and 45,000 bridges are in poor condition.

The bill invests $7.5 billion to build out a national network of electric vehicle (EV) chargers. U.S. market share of plug-in EV sales is only one-third the size of the Chinese EV market.

The deal will deliver thousands of electric school buses nationwide.

The bill invests $17 billion in port infrastructure and $25 billion in airports to address repair and maintenance backlogs.

The deal’s $55 billion share represents the largest investment in clean drinking water. It comes at a time up to 10 million American households and 400,000 schools and child care centers lack safe drinking water.

The deal’s $65 billion investment ensures every American has access to reliable high-speed internet. More than 30 million Americans are said to be living in areas where there is no broadband infrastructure that provides minimally acceptable speeds.

After the announcement of deal, Secretary of Commerce Gina M. Raimondo said, “Today, we are one step closer to making a historic investment in America’s infrastructure that will create millions of jobs and position the U.S. to remain competitive in the 21st century”.

Former President Donald Trump expressed strong dislike over the bipartisan agreement. This will be a victory for the Biden Administration and Democrats, and will be heavily used in the 2022 election, according to him. “It is a loser for the USA, a terrible deal, and makes the Republicans look weak, foolish, and dumb,” he said in a statement.