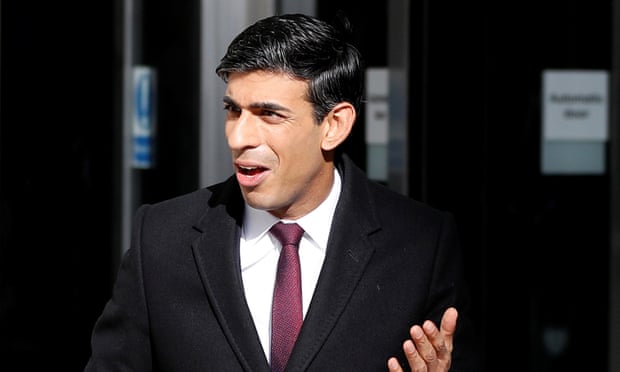 The chancellor, Rishi Sunak, is facing mounting pressure to announce a package of emergency measures in Wednesday’s budget designed to support companies and households through the worst of the coronavirus outbreak.

Business leaders warned that the growing scale of the disruption for the economy amid widespread panic on financial markets meant urgent steps were required to shore up confidence. The Institute of Directors said Sunak needed to announce measures on Wednesday to provide UK companies with extra breathing space to spread out their tax payments.

Tej Parikh, chief economist at the IoD, said: “Government must be at the ready to take swift action to help cash-strapped businesses bridge this challenging period. The upcoming budget also provides an opportune moment to lower business costs and support investment to amplify the post-outbreak recovery.”

The Bank of England is expected to be called upon by the Treasury to provide extra support to struggling firms. Andrew Bailey, who replaces Mark Carney as the Bank’s governor on 16 March, said last week that Threadneedle Street was in talks with the chancellor about providing a coordinated package of short-term financing to firms.

Economists said this could take the form of government guarantees for commercial banks to provide firms with short-term loans, with any losses being underwritten by the Treasury. The IoD also called on ministers to put pressure on high street banks to provide access to cheap emergency loans.

Laura Gardiner, research director at the Resolution Foundation, said: “There have been lots of examples from the past decade of this. Something like that again could be used, with focus on the firms that would suffer the worst hit.”

She said the Bank could issue an emergency rate cut of around 50 basis points, sinking the cost of borrowing back down to the lowest level in its 325-year history at 0.25%.

Britain’s biggest commercial bank, NatWest – which is still majority-owned by the government after RBS collapsed in the financial crisis – said it would provide £5bn of funding support to small firms. It will also offer loan repayment holidays of up to six months, temporary emergency loans and fee-free borrowing.

Barclays is offering its business clients 12-month capital repayment holidays on loans worth more than £25,000, as well as bigger overdrafts and access to a £14bn fund launched last year as part of a three-year commitment to small firms to build resilience during uncertain times.

Business confidence in Britain is rapidly evaporating as the disruption to the world economy caused by the coronavirus mounts. About one in five company bosses surveyed by the IoD said the outbreak represented a high or severe threat to their organisation, with a further 40% seeing the risk as moderate.

Gardiner said the government could launch a compensation scheme for firms with high statutory sick pay bills, which could be increasingly required if more workers were forced to self-isolate. The government previously had a programme called the “percentage threshold scheme”, which provided support to companies struggling with staff absences but was abolished in 2014.

The Institute for Fiscal Studies warned that cuts to VAT – as deployed to support firms and families in the financial crisis – would be unsuitable for the chancellor this time around. It said incentives for consumers to spend were unwanted at a time when growing numbers of people might need to stay away from public spaces, shops and restaurants.

Gardiner said: “This is a temporary shock. We need to help firms with acute problems with absences. It’s about getting them through this period rather than permanently changing tax bills.”