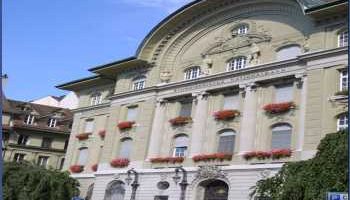 The Swiss National Bank, on Thursday, decided to hold its policy rate and interest on sight deposits at -0.75 percent.

Economists had also expected the rate to remain unchanged as it had already reached negative levels.

The bank rephrased its view on the currency, saying the Swiss franc is “even more” highly valued.

Negative interest and interventions are necessary to reduce the attractiveness of Swiss franc investments and thus counteract the upward pressure on the currency.

The SNB will take additional steps to ensure liquidity as necessary. Along with other major central banks, the SNB also decided to provide liquidity as part of the extended swap arrangements, particularly in US dollars.

The central bank said it is raising the exemption threshold as of April 1, 2020, thus reducing the negative interest burden on the banking system. The threshold factor will increase to 30 from 25.

SNB does what it can with its little ammunition left, David Oxley, an economist at Capital Economics, said. A broader crisis package, in conjunction with the Federal Council, appears to be on its way, the economist added.

In December, the SNB had forecast an inflation of 0.1 percent this year and 0.5 percent for 2021.

GDP growth is likely to be negative for the year as a whole. The return to normality from the second half of the year onwards could thereafter be reflected in strong positive growth in 2021, the bank noted.