The first genetically modified mosquitoes released in the U.S. to buzz in the Florida Keys

On Thursday morning, workers from a British company placed basketball-sized cardboard boxes into six yards in the Florida Keys.

Then they added water.

In a week or so, 12,000 male Aedes aegypti mosquitoes will – one by one – begin buzzing out of each box, the first genetically modified mosquitoes to be released in the United States.

Local officials argue the trial is necessary at a time when pesticides are increasingly ineffective against these dangerous pests. A 2016 vote on the project claimed a solid majority of support in most of the surrounding counties.

“At the end of the day, our hope is to be able to control this mosquito more efficiently and keep our population below any sort of disease transmission threshold,” said Andrea Leal, executive director of the Florida Keys Mosquito District. “Our toolbox for Aedes aegypti control is shrinking, unfortunately, and that’s making us think outside of the box.”

But years-long opposition to the test project continues, with critics  arguing it could have unintended consequences and that their concerns have not been adequately addressed by the government or Oxitec, the British biotechnology company releasing them.

“When you disrupt an ecological system whether it’s a small disruption or a big disruption, you’re going to have an impact,” said Dana Perls, program manager at Friends of the Earth, a Washington, D.C.-based environmental advocacy group that opposes the project.

“History has taught us time and time again that we need serious precaution with new genetic engineering experiments and technologies,” Perls continued. “Once you release this genetic material into the wild, you can’t recall it.”

In this case, the aim is to use those released male Aedes aegypti to track down mates and lay eggs. The mosquitoes of both genders have been genetically modified so that any female offspring will die before reaching adulthood. With each successive generation, there will be fewer biting females. Eventually, the population will crash entirely.

The insects also have been given a gene that fluoresces under certain lights, so scientists can easily identify and track descendants of the altered mosquitoes.

“I can understand the caution,” Leal said, “this is a novel technology that has not been used in the United States before.”

But she says the Environmental Protection Agency has examined every concern “and at the end of the day they’ve moved forward with the approvals for this project so we feel comfortable to move forward as well.”

In the Keys, Aedes aegypti account for only about 4% of the total mosquito population, but the species caused 70 cases of dengue fever in Key Largo last year, and can also carry Zika, chikungunya and yellow fever. As pesticides become less effective against this dangerous pest, the state needs to find other ways to control them, Leal said.

The trial will have a relatively minor footprint – six isolated boxes releasing 12,000 male mosquitoes each for 12 weeks – so she doubts it will have a major effect on the larger ecosystem.

“We wouldn’t anticipate any permanent changes,” she said.

Kevin Esvelt, a scientist at the Massachusetts Institute of Technology, who is not connected to the project, said he sees no credible health or environmental threat.

But as someone who has spent years developing similar projects and communicating with non-scientists about them, Esvelt said both the government and company should have brought the public into the process earlier and done more to help them feel heard.

“Even if nothing goes wrong, it will still have contributed to dividing the community,” he said.

And in this case, the disease risk from these mosquitoes may not be enough to justify such a cost. 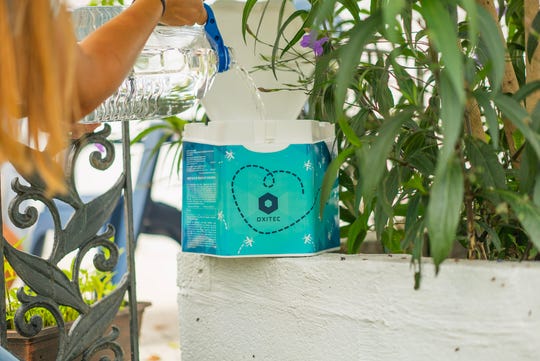 Oxitec is launching a project to reduce the population of disease-causing mosquitoes. The box contains mosquito eggs and food. About a week after adding water, adult male mosquitoes begin to fly out. They are genetically engineered so their female offspring won't reach adulthood. (Photo: BRAND AID CREATIVE GROUP)

“It’s not clear that this is a severe enough community problem for people to take what looks to meto be an extraordinarily low risk, but it doesn’t look that way to everyone,” he said.

The Aedes aegypti, which is native to the African continent, arrived in the United States probably around the year 1600, Leal said, likely alongside the slave trade. The insects live their entire two-week-long existence within the distance of about two suburban houses.

The Keys, which lie at the southern-most tip of Florida, starting about 60 miles from downtown Miami, have long had a mosquito problem, mostly from the salt marsh mosquito which makes up most of the population and feeds on all mammals, Leal said. “They’re much more opportunistic” than the Aedes aegypti, which prefers only one meal: human blood.

After a dengue outbreak in Key West in 2009-2010, in which 100 people were infected, the mosquito control district reached out to Oxitec. The two have collaborated ever since to meet state and federal requirements for the new experiment.

The Aedes aegypti doesn’t play a key role in the ecosystem, Leal said, because it makes up such a small part of the mosquito population – no frogs will go hungry without them – and because they are not native species.

“We don’t see other mosquitoes moving in to fill that niche,” if the Aedes aegypti are removed, added Nathan Rose, Oxitec’s head of regulatory affairs. “We’ve looked at that really carefully,” he said, and will be monitoring to make sure it doesn’t happen in Florida.

Oxitec has genetically engineered the female mosquitoes to die unless they are exposed to the antibiotic tetracycline before they reach adulthood. The males carry the same gene altered, but are unaffected by it. They continue to produce offspring as before. But only their sons survive.

After one generation, there will be half as many females as males, and half again in the next generation and the next. The man-made genetic changes should largely die out over the course of months, and not have an impact on other species, Rose said.

“This is not the first time that these mosquitoes are being released into the environment,” he said. “This is just showing that it works as well in Florida as it has in other places.” 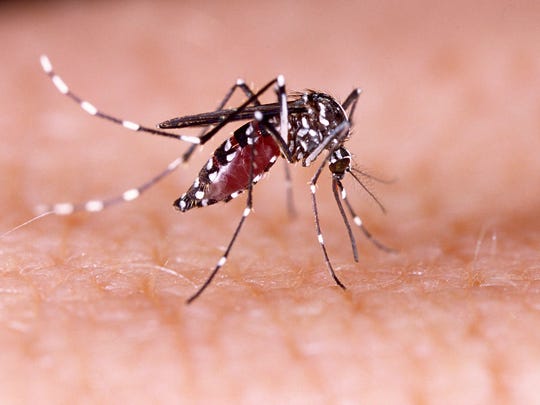 An aedes aegypti mosquito, which can transmit the Zika virus and dengue fever. (Photo: Dreamstime)

Oxitec ran experiments in the Cayman Islands using an earlier generation of the technology, and has been using the current approach in Brazil for the last three years.

The success of that project is another point of contention between the company, which considers it a triumph, and opponents who worry that the modified mosquitoes persisted in the environment longer than they should have, perhaps permanently changing the gene pool.

The company has a network of traps near its boxes, whose locations they have not revealed, to track the mosquito population after the release and see if the genetic modifications are having any unintended effects.

One thing they will not be looking at, despite years of lobbying by Dr. John Norris, among others, is the bacteria living on those altered mosquitoes.

Norris, chief of staff for the Lower Keys Medical Center in Key West, spends a lot of his professional life helping patients fight antibiotic resistant infections. He’s worried that exposing the original female mosquitoes to tetracycline so they’ll live long enough to reproduce, the bacteria that live on them will be altered, and perhaps increase the risk of antibiotic-resistant infections in humans bitten by them.

MIT’s Esvelt said he’s never heard of a bacterial infection being triggered by a mosquito, but it’s a simple study to do, so he thinks Oxitec should do it.

The EPA, which Rose said took 14 months to review 4,000 pages of data on the project, as well as 30,000 public comments, seemed unconcerned about Norris’ infection worries.

But it did require Oxitec to ensure that the mosquito boxes aren’t placed anywhere near a sewage treatment plant or a citrus grove. There, the insects might be exposed to tetracycline which is used to treat fruit trees and is found in human waste. That could allow females to survive into adulthood.

By requiring the boxes to be placed at least five-and-a-half football fields from either possible source, “the actual chance of a female finding tetracycline is extremely low,” Rose said. 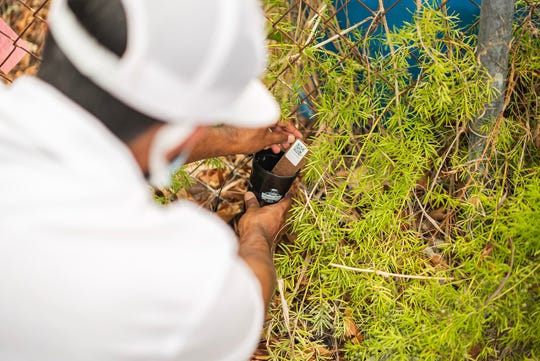 The Keys Mosquito Control District has tried repeatedly to reduce the Aedes aegypti population by limiting their breeding spots, often in back yard flower pots, tarps and discarded tires, Leal said. But “it’s difficult to get people to change behavior.”

There are other ways to modify mosquitoes that don’t involve genetic changes, and stir up less opposition. In 2017, the district experimented with an approach in which Aedes aegypti were infected with a naturally-occurring bacteria called Wolbachia that renders mosquitoes infertile and unable to carry disease.

Leal said the Wolbachia trial, led by California-based Verily, went well and she hopes to add the approach to the district’s arsenal, but it’s not yet approved for use yet in the United States. “It’s definitely a tool we’ll be pursuing,” she said.

Esvelt also is a fan of the Wolbachia approach, especially the nonprofit version led by the World Mosquito Program.

It’s still unclear how much either the Verily or Oxitec technologies will cost, Leal said. Because the community has used both under trial conditions and neither is authorized for widespread use, the district did not have to pay for either experiment.

If approved, likely based in part on results from the Keys, Leal said she’ll consider which one gives her community better results for the cost.

“Oxitec is by no means a silver bullet,” she said. “We’re just looking at any new tools we can add to our arsenal to get the best control possible.”

Friends of the Earth and other environmental groups have been hoping the EPA would step in and stop the project. But Thursday morning passed without any word from Washington and the boxes were placed and watered.

At this point, after years of fighting and feeling unheard, activists like Barry Wray, executive director of the Florida Keys Environmental Coalition, say they feel betrayed by the federal regulatory agency, and “we have a company we don’t trust.”

“This is not something that should be released without investigating the risk properly, and that’s what’s happening and it’s happening to us,” added Wray, who lives in Berkeley, California.

Leal, the mosquito control board head, disagrees. After more than a decade of working with the company and years of regulatory hurdles, she feels the time is right to begin the test.

“It’s difficult to be the first,” she said, but “I’m really excited.”