After a turbulent few years, Microsoft's Xbox division is back in the good graces of gamers everywhere.

With the launch of the brand-new Xbox Series X and Series S consoles in mid-November, Microsoft officially kicked off the most recent game console generation with two killer boxes. While the Xbox One was routinely old-sold by Sony's PlayStation 4, Microsoft seems well-positioned with these new consoles to take on the PlayStation 5, which was also released this month.

And that turnaround is due to a years-long effort from a dedicated group at the company who not only remember the golden years of the Xbox 360, but who also see the future of cloud gaming and Xbox as an ecosystem unto itself.

These leaders are also responsible for making gaming a bigger priority for Microsoft overall. The gaming business has become so important to the company CEO Satya Nadella made gaming boss Phil Spencer one of his direct reports in September 2017. Spencer regularly speaks at company all-hands meetings, presenting the company's vision for services like Xbox Game Pass.

Business appears to be booming amid the pandemic. Microsoft doesn't report specific revenue figures for Xbox, but said in its most recent quarter that revenue was up 30%.

Here are the 22 power players of Microsoft's gaming division: 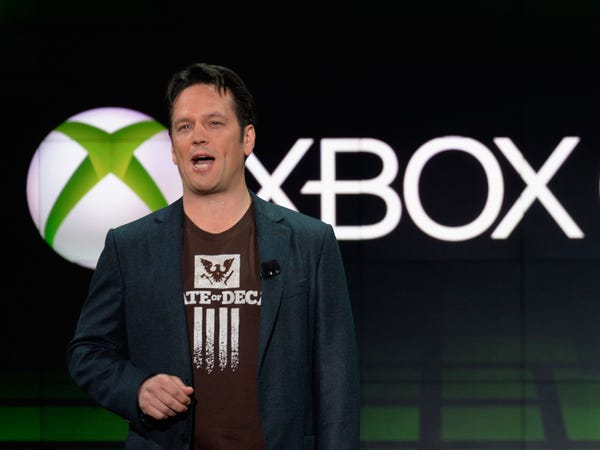 He was also behind Microsoft's still-pending $7.5 billion acquisition of "Elder Scrolls" and "Fallout" publisher Bethesda Softworks. Spencer has led Microsoft's effort to bring the Xbox brand back into the spotlight in the game business, and to broaden that brand into areas: The subscription-based service Xbox Game Pass, and its new streaming functionality, are the fruition of a years-long plan that Spencer spearheaded.

Beyond Microsoft, Spencer is a game industry leader — he serves as a co-chair of the Entertainment Software Association, and is the face of the Xbox brand. He started his career at Microsoft as an intern in 1988. 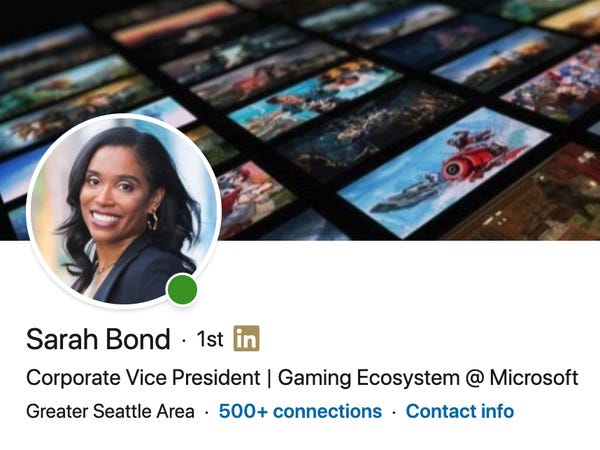 Sarah Bond is the corporate vice president of Microsoft's gaming ecosystem, leading an engineering and business team with a "mission is to empower game creators to conceive, build, launch, and manage games – using any and all of Microsoft's software and services from Xbox to Azure," according to the company.

Bond's LinkedIn profile describes the gaming ecosystem as a $10 billion business. Bond, according to Microsoft, has been instrumental to the growth of Xbox as she's helped the company expand partnerships and secure streaming rights for the streaming service built into Xbox Game Pass. 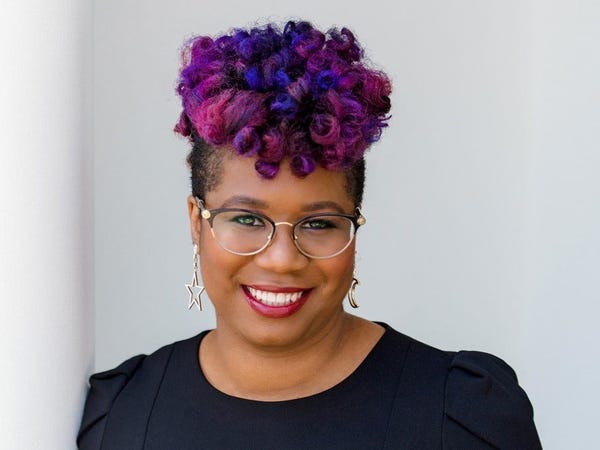 Melissa Boone is a social psychologist who studies games user behavior and interactions as a senior research manager on the Xbox Research team.

Boone's work includes the Microsoft-owned Halo and Minecraft franchises and has conducted research projects that inform Microsoft's gaming streaming service, the Xbox store, and several of the studios that develop first-party Xbox games. 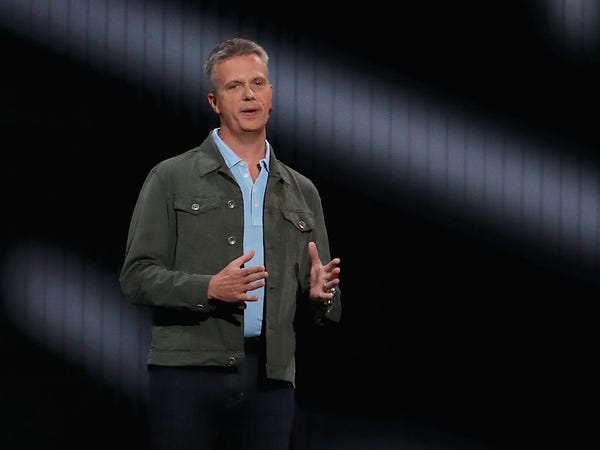 Matt Booty runs the organization in charge of developing and publishing Microsoft games across consoles, PC, and mobile platforms.

Xbox Game Studios, led by Booty, is responsible for blockbuster franchises such as Halo, Minecraft, and Forza, and includes 15 studios from Halo developer 343 Industries and Gears of War developer The Coalition.

Booty had a significant role in Microsoft's 2014 acquisition of Minecraft developer Mojang, and integrating the team into Xbox Games Studios, according to Microsoft. He also led the expansion of Minecraft into new platforms including the Nintendo Switch and into new areas such as virtual reality and education. 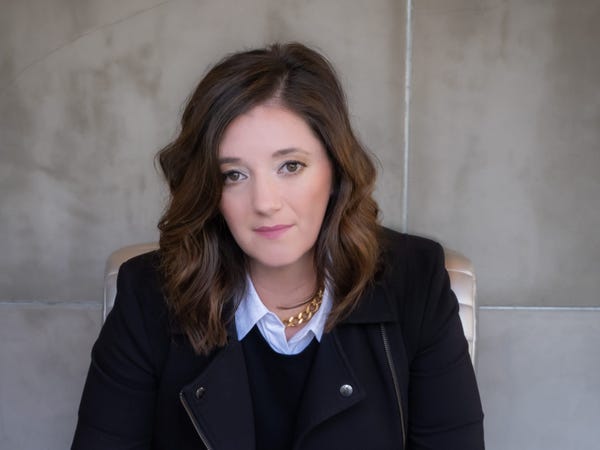 Card started working for Microsoft in 2015 as director of executive communications for the company's Windows and Devices group, and previously worked for the office of former South Carolina Gov. Nikki Haley. 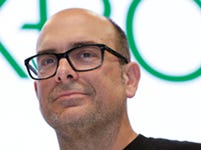 Microsoft announced ID@Xbox in 2013 and more than 4,000 studios have since joined the program, shipping more than 2,000 games. Microsoft says it has paid more than $1.5 billion in royalties to independent developers, with notable alumni of the program including hits like "Cuphead" and "Stardew Valley." 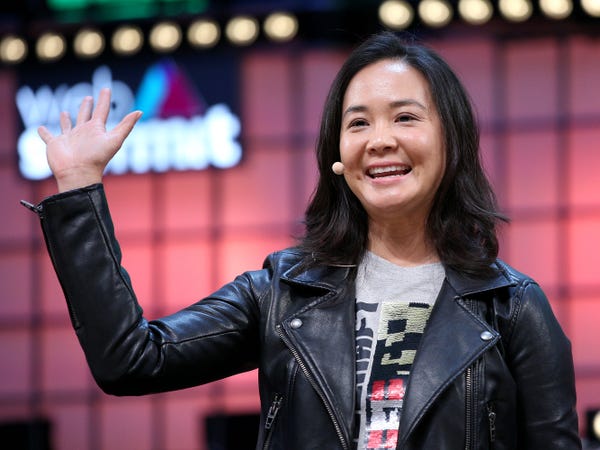 Chiang was the former chief of staff for Microsoft Studios and previously managed the Xbox Live online gaming subscriptions business, which more than doubled its subscriber based under her watch. 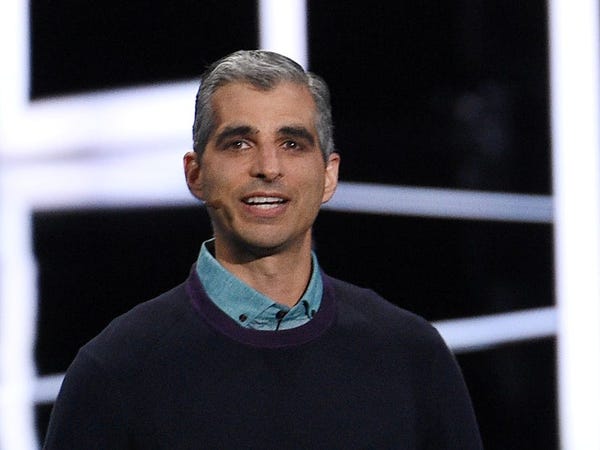 Choudry, who has spent more than two decades at Microsoft, is a key executive behind the cloud technology used in Xbox Game Pass to stream games to smartphones and other devices. 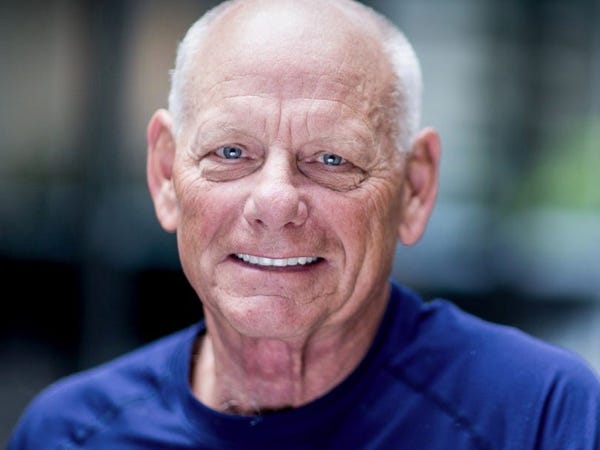 Dave Cutler is best known for his significant role in developing Windows NT family of operating systems, which has been the basis for all modern versions of Windows since 1993, according to Microsoft.

He later played a key role in the development Microsoft's Azure cloud computing business. Cutler has worked with Xbox since 2012, but Microsoft hasn't released a lot of details about his exact role within the organization. However, with services like Xbox Game Pass and the ongoing push for more realistic physics and graphics in video games, there are plenty of technical challenges to be solved within Microsoft's gaming division. 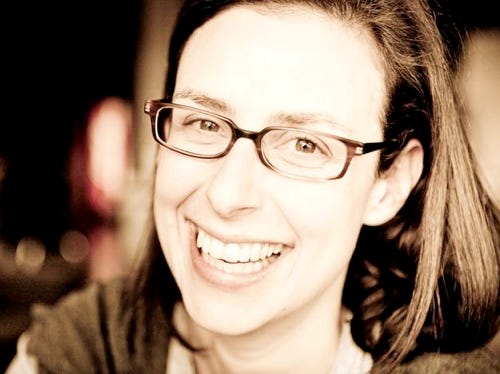 Catherine Gluckstein is general manager for Project xCloud, the streaming service built into Xbox Game Pass. That means she leads product engineering and strategy for Xbox cloud gaming — a vital competitive arena for Microsoft as it looks to take Xbox beyond just a console.

Before taking on the new role last year, Gluckstein was Xbox chief of staff and worked with gaming chief Phil Spencer on Microsoft's gaming strategy. 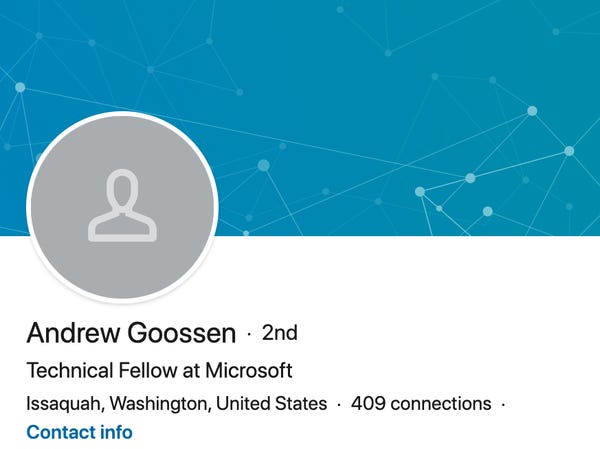 Andrew Goossen is a system architect for the newly released Xbox Series X and has worked on Xbox since the original console's announcement at the Game Developers Conference in 2000.

Goossen "took the reins to dive deep into the technological bells and whistles that will be powering Xbox Series X," according to Microsoft, which describes the console as its most powerful ever. 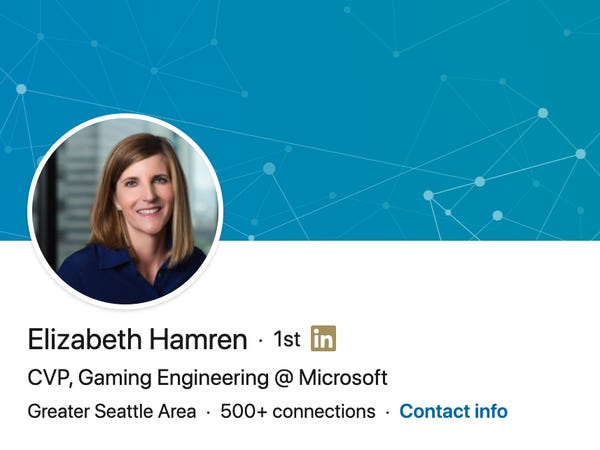 Liz Hamren runs Microsoft's gaming experiences and platforms team, which means she's oversees user experiences across devices including console, PC, and mobile. Hamren is also in charge of the development and engineering of the newly released Xbox Series X.

Hamren, who started her career as a Microsoft project manager, is the former chief marketing office of Facebook's virtual reality subsidiary Oculus. She rejoined Microsoft in 2017 as a corporate vice president, initially running sales and marketing for the Surface hardware line and the HoloLens augmented reality device. 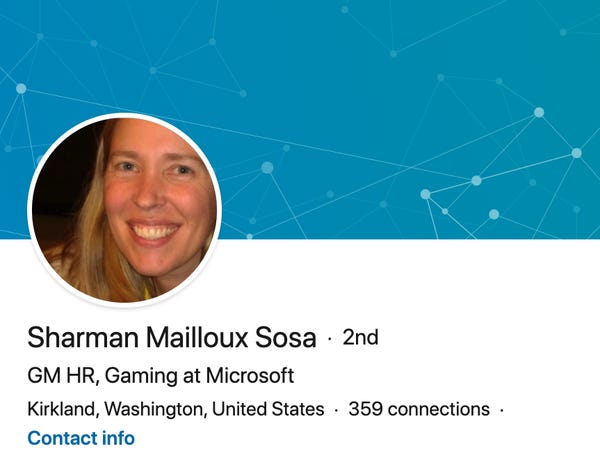 Mailloux Sosa started at Microsoft in 1998 as a technical college recruiter and moved over to Xbox's HR department in 2013. She's in charge of applying the so-called "growth mindset," a psychological principle about embracing challenges and learning from failure that has become a mantra at Microsoft, to the company's gaming business. 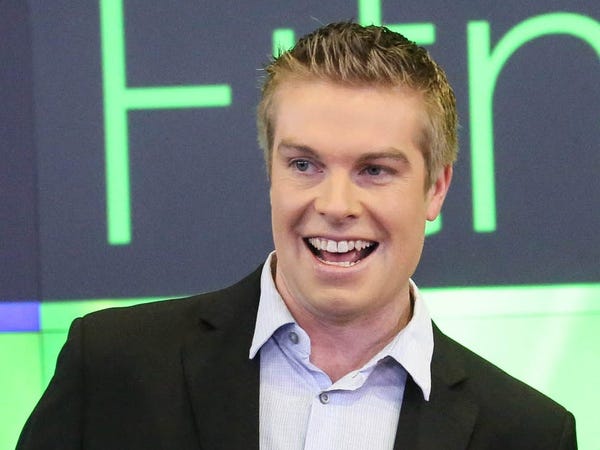 McCarthy's team handles operations, customers support, privacy and security, and data and insights. He joined Microsoft in 2009 from Electronic Arts, where he was a vice president. McCarthy now represents Microsoft in collaborations with partners such as Amazon, EA, Nintendo and Sony. 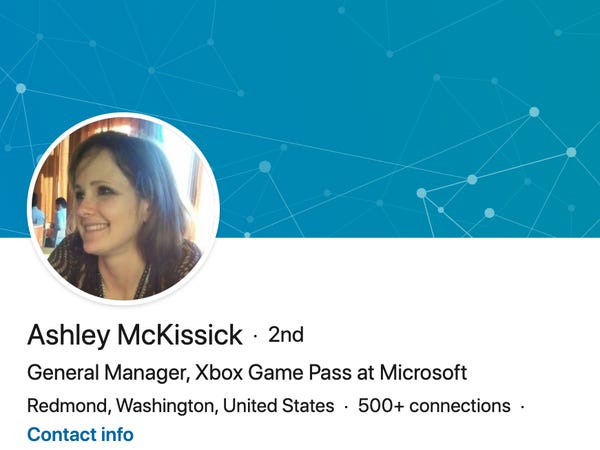 Ashley McKissick runs Microsoft's game streaming and subscription service Xbox Game Pass, responsible for everything from the team who runs to it the engineering behind it.

McKissick joined Microsoft in 2002 and is significant force being Microsoft's streaming initiatives. She has more than a dozen patents related to real-time streaming and led the team that enabled Microsoft to stream games from Xbox One consoles to Windows 10 PCs. 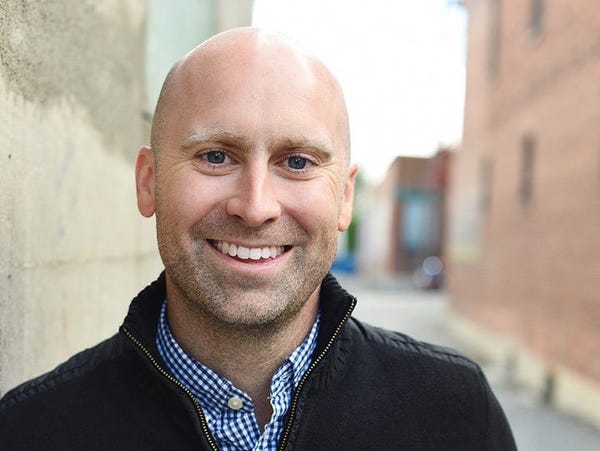 Stuart has worked from Microsoft since at least 2002, according to his LinkedIn profile, starting out as an associate financial analyst. His purview at Xbox also includes the studios that develop first-party Xbox games, plus digital subscriptions, console and accessory hardware, and its digital store. 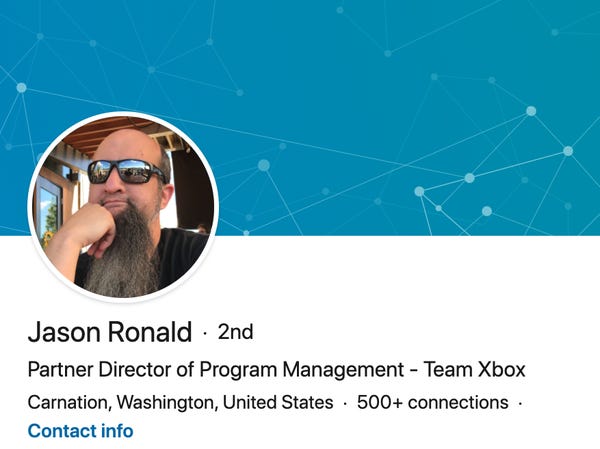 Jason Ronald is in charge of program management for the Xbox Platform team, where he leads development for the company newly released Xbox Series X and Series S consoles, as well as the last-generation Xbox One consoles. 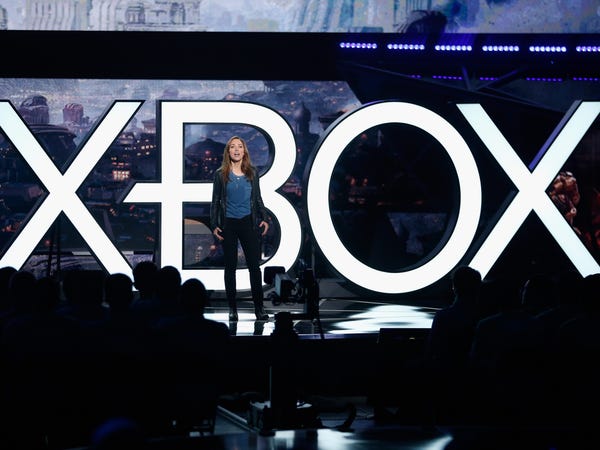 Bonnie Ross is the founder and head of 343 Industries, the development studio behind what's considered the original Xbox franchise, Halo, with more than $6 billion in worldwide sales.

Ross is credited with saving the series after Microsoft almost killed the franchise after the company split from Bungie, the game's original developer. When Ross took over 343 Industires in 2007, she said in an Bloomberg interview in 2015, Microsoft was considering giving up on the franchise entirely.

"The thing I asked for was: If I take it over, I want to be George Lucas. I want to own everything, and I want to do things differently," Ross said in the interview. Next up for the franchise is "Halo Infinite," slated to be the first major first-party release for the new Xbox Series X and Xbox Series S consoles in the new year. 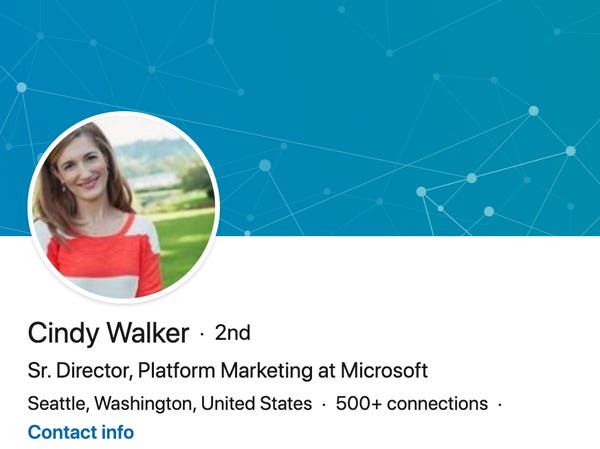 Walker stated working at Microsoft in 2008 as the global business manager for Xbox Live, according to her LinkedIn profile, and her marketing career has spanned companies like Pepsi and Cranium, as well as sports teams like the Anaheim Angels and Mighty Ducks of Anaheim. 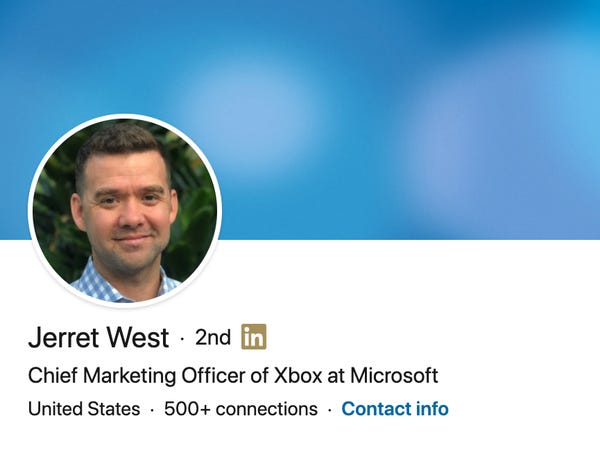 Jerret West is Xbox's chief marketing officer, responsible for a 200-person team and a more than $500 million in marketing budget for games like Halo and Minecraft, hardware like Xbox consoles, and services like Game Pass and Xbox Live.

West is the former head of marketing for Netflix Asia Pacific region. He worked at Microsoft between 2003 and 2011 before leaving his role as Xbox director of marketing to become American Express vice president of digital marketing. He returned to Microsoft in his current role in December 2019. 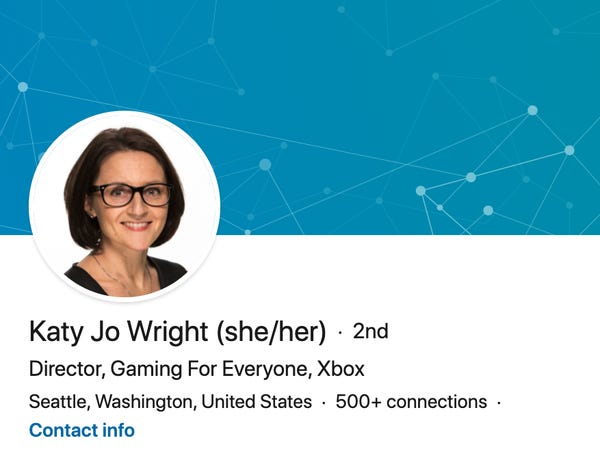 Katy Jo Wright is responsible for bringing inclusive practices to Microsoft's creative and engineering processes in what the company calls Gaming for Everyone.

Wright, a 19-year Microsoft veteran, joined Xbox from the company's global diversity and inclusion team where she contributed to the company's efforts to attract and develop diverse talent for engineering groups. 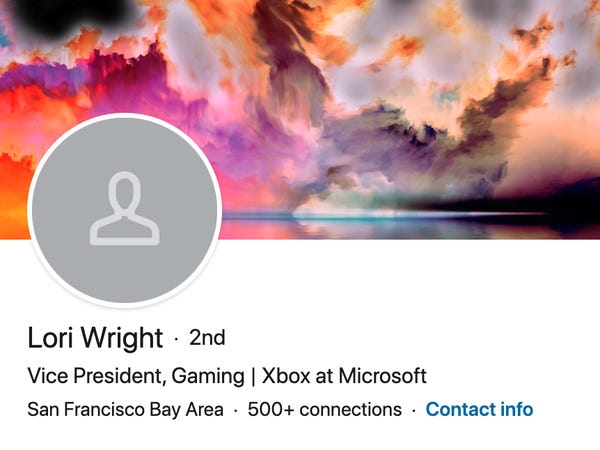 Wright joined Microsoft in 2017 as general manager for collaborations apps, like the Microsoft Teams chat app, within the company's Office 365 suite of business applications. She moved to her current role in October 2019.