Atanu Biswas explains the economics behind hosting a Games in pandemic times. 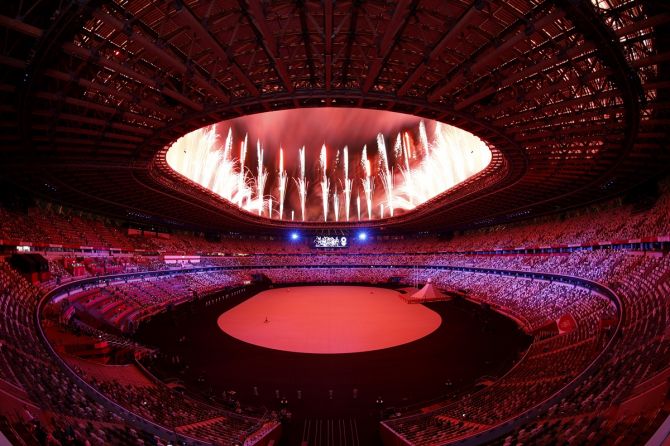 A hundred years ago, Belgium recorded a loss of more than 600 million francs by hosting the first pandemic-hit 1920 Antwerp Olympics, following the Spanish Flu.

The costs of hosting the Olympics have skyrocketed thereafter.

In his 2015 book Circus Maximus: The Economic Gamble Behind Hosting the Olympics and the World Cup, American economist Andrew Zimbalist outlined the economic impact of hosting such grand events.

With television broadcasting becoming widely revenue-generating and a massive increase in the number of Summer Olympics participants and the number of events, the 1970s marked a point of change in this context.

Still, Denver rejected its Olympics in 1972 after it was chosen the host city, and the Montreal Games in 1976 yielded some $1.5 billion in debt, which took 30 long years to pay down.

Subsequently, in 1979, Los Angeles was the only city to bid for the 1984 Summer Olympics!

Barcelona made a $10 million profit in 1992 to become the poster child of success in Olympics hosting.

Although Atlanta in 1996 and Beijing in 2008 registered healthy profits, and London reported no-profit-no-loss in 2012, Sydney in 2000 and Athens in 2004 experienced huge losses. And despite Brazil hosting the football 2014 World Cup, Rio de Janeiro’s 2016 Summer Olympics experienced a $2 billion loss.

The immediate benefits of hosting the Olympics are sometimes visible — InterVISTAS Consulting estimated that the 2010 Winter Olympics in Vancouver lifted output by $10.7 billion and created 244,000 jobs, for example.

However, ‘the perennial claims that hosting the Olympics or the World Cup is an engine of economic development find little corroboration in independent studies,’ Zimbalist writes.

‘Much of the alleged legacy comes in the form of qualitative gains, and the rest comes over very long periods of time … But more often than not, the main legacy consists of white elephants that cost billions to build and millions annually to maintain, along with mountains of debt that must be paid back over ten to thirty years.’

A January 2016 report of the Bank of Japan estimated the ‘Economic Impact of the Tokyo 2020 Olympic Games’ mostly through increase in foreign tourism and construction investment.

Aggregate construction investment associated with the Olympic Games was estimated as ¥10 trillion by 2020. And it was predicted that Japan’s annual real GDP growth would be pushed up by 0.2-0.3 percentage points during 2015-2018 due to the Olympics.

However, the estimated price of Tokyo 2020 was $7.5 billion when the city won the bid in 2013, and it became $15.4 billion in December 2020. And although Japan’s output was raised considerably by co-hosting the 2002 World Cup, many experts doubted the financial success of the 2020 Games even in the absence of COVID-19.

This May, the Nomura Research Institute, a leading think-tank and systems integrator in Japan, studied the economics of the pandemic-hit Olympics.

Initially, the Tokyo Olympics had an estimated one million foreign spectators, each spending an average of ¥151,000 on accommodation, food and drink, and transportation during his or her stay.

The total spend of ¥151.1 billion could add to Japan’s GDP, but it disappeared with the ban on foreign visitors.

The Nomura Research Institute estimated the economic benefit of the pandemic-hit Tokyo Games at ¥1,810.8 billion, which would drop to ¥1,664 billion without domestic spectators.

This also represents the economic loss of cancelling the Games.

Well, cancelling the Olympics was a much discussed matter.

Different surveys during the last few months illustrated that 70-80 per cent of Japanese respondents wanted a cancellation or further postponement of the Olympics, mostly due to the widespread speculation that the Games might very well act as a super-spreader amid the ongoing pandemic.

‘We strongly request that the authorities convince the IOC (International Olympic Committee) that holding the Olympics is difficult and obtain its decision to cancel the Games,’ the Tokyo Medical Practitioners Association wrote to the Japanese prime minister.

And with all of the different mutant strains of the virus existing in different places concentrating and gathering in Tokyo, there is a possibility of even a new strain of the virus emerging, the head of the Japan Doctors Union believed!

The insurance industry could face claims of $2 billion-$3 billion — the largest ever for a global event cancellation in history — if such a thing happened.

But the decision to cancel the Games lies ultimately and unilaterally with the IOC. And the IOC was certainly not in a mood to cancel the event.

Noting the losses from Japan’s first three states of emergency declarations, the Nomura Research Institute warned the resulting economic losses for another state of emergency to tackle a surge in COVID-19 cases due to the Olympics could substantially be larger than the loss owing to the cancellation!

The Games, however, are on. And cities like Istanbul and Madrid might be relishing their unsuccessful bids for the 2020 Games more than ever.