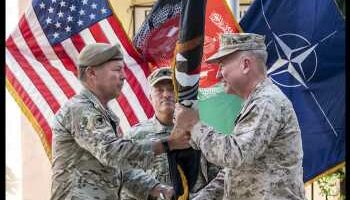 Gen. Austin S. Miller, who was the longest serving officer to oversee NATO and US forces in Afghanistan, has transferred control to two US generals.

Gen. Miller steps down as the two-decades long US-led military mission in the war-ravaged country comes to end in less than two months.

It comes as Taliban militants seize more territory throughout Afghanistan.

Miller has served as the commander of U.S. Forces Afghanistan and the NATO Resolute Support Mission since September 2018. He is the man who implemented the decision to retrograde U.S. and NATO forces from the country.

McKenzie, the commander of U.S. Central Command, said he will remain focused on protecting U.S. diplomatic presence in Afghanistan, ensuring the safe operation of the international airport in Kabul, providing advice and assistance to Afghan National Defense and Security Forces, and supporting counterterrorism efforts.

At a briefing Monday, Pentagon Press Secretary John Kirby said that through the drawdown, which is expected to be complete by the end of August, the U.S. troops will continue to ensure the airport remains safe.

Long-term security at the airport, following the U.S. departure from Afghanistan, will be handled by Turkey.

The U.S. and other nations have diplomatic presence in Afghanistan. Ensuring that the Kabul International Airport remains open and secure is critical to the successful operations of those diplomatic missions.

Millions of tons of military equipment and thousands of U.S. military personnel are being withdrawn from Afghanistan to meet the August 31 deadline that President Joe Biden has set to wind up US military operations in the Asian country.

Biden had announced in April that all US troops will withdraw from Afghanistan by September 11, which marks the 20th anniversary of the Al-Qaeda terrorist attacks on American soil.

He later advanced the withdrawal schedule.

The Taliban, who were removed from power in 2001 by US-led forces, have reportedly made significant territorial advance in many parts of the country by intensifying attacks.

Gen. Miller has expressed concern about the pace of the terrorist outfit’s resurgence, and the potential for Afghanistan returning to civil war in the absence of US military presence in the country.

The longest war by United States abroad has cost it trillions of dollars and the lives of more than 2,000 soldiers.