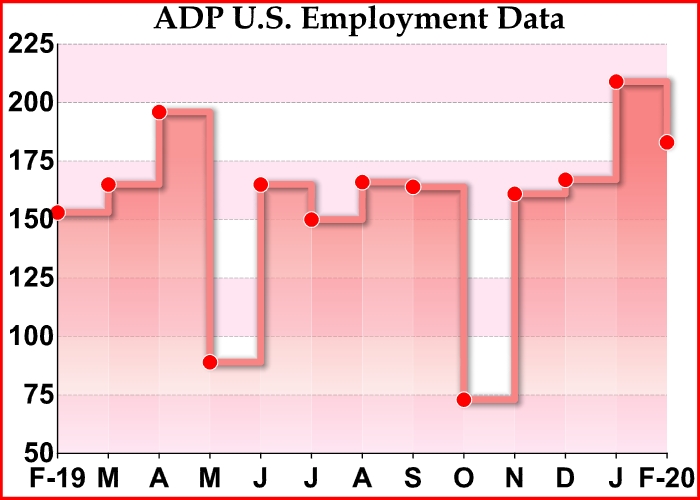 Private sector employment in the U.S. increased by more than expected in the month of February, according to a report released by payroll processor ADP on Wednesday, although the report also showed a notable downward revision to the substantial job growth in the previous month.

ADP said private sector employment climbed by 183,000 jobs in February compared to economist estimates for an increase of about 170,000 jobs.

However, the report also showed the spike in jobs in January was downwardly revised to 209,000 from the previously reported 291,000.

The stronger than expected job growth in February reflected a significant increase in employment in the service-providing sector, which jumped by 172,000 jobs.

The trade, transportation and utilities, professional and business services, education and health services and leisure and hospitality industries all saw healthy job growth.

Meanwhile, the report said employment in the goods-producing sector edged up by 11,000 jobs, as an increase of 18,000 construction jobs was partly offset by modest decreases in manufacturing and mining jobs.

“Unfortunately, the apparent strength of jobs growth in February provides little comfort at this stage and, with a widespread coronavirus outbreak in the U.S. looking increasingly likely, we expect economic growth to slow over the next few months,” Hunter said.

He added, “That is unlikely to have an immediate impact on jobs growth, but it does suggest some softening is likely over the coming months, with the risk of a much sharper slowdown if more serious virus-related disruption forces firms in industries like travel, retail and leisure to start laying off workers.”

On Friday, the Labor Department is scheduled to release its more closely watched monthly jobs report, which includes both public and private sector jobs.