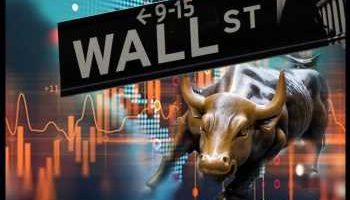 U.S. Stocks Close Little Changed On The Day But Sharply Higher For The Week

Stocks showed a lack of direction over the course of the trading session on Friday before ending the day little changed. The major averages spent much of the day bouncing back and forth across the unchanged line before closing mixed.

Despite the lackluster performance on the day, the major averages moved sharply higher for the week, largely reflecting the rally on Monday. The Nasdaq surged up by 3.4 percent, while the Dow and the S&P 500 jumped by 3.3 percent and 3.2 percent, respectively.

The choppy trading on Wall Street came as traders seemed reluctant to make more significant moves as they digested the volatility seen over the past few sessions.

Concerns about rising tensions between the U.S. and China also kept traders on the sidelines, as Beijing moved to strengthen control over Hong Kong with new security laws.

U.S. President Donald Trump warned that Washington would react “very strongly” if China follows through on its plans.

The latest developments come after the Senate passed a bill on Wednesday that would potentially delist Chinese stocks from U.S. exchanges.

In other China-related news, the Chinese government abandoned setting an economic growth target for the first time amid uncertainties posed by the coronavirus pandemic.

The upcoming Memorial Day holiday also contributed to the light trading, with some traders looking to get a head start on the long weekend.

Most of the major sectors ended the day showing only modest moves, although oil service stocks showed a significant move to the downside. Reflecting the weakness in the sector, the Philadelphia Oil Service Index tumbled by 2.1 percent.

The weakness among oil service stocks came amid a decrease by the price of crude oil, with crude for July delivery sliding $0.67 to $33.25 a barrel.

Considerable weakness was also visible among computer hardware stocks, as reflected by the 1.7 percent slump by the NYSE Arca Computer Hardware Index.

On the other hand, commercial real estate stocks showed a strong move to the upside on the day, driving the Dow Jones U.S. Real Estate Index up by 1.5 percent.

Meanwhile, the major European markets turned in a mixed performance on the day. While the German DAX Index inched up by 0.1 percent, the French CAC 40 Index closed just below the unchanged line and the U.K.’s FTSE 100 Index fell by 0.4 percent.

In the bond market, treasuries saw modest strength after ending the previous session nearly flat. As a result, the yield on the benchmark ten-year note, which moves opposite of its price, dipped 2 basis points to 0.657 percent.