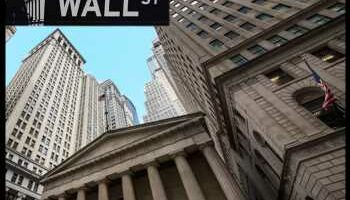 Stocks have come under pressure over the course of the trading day on Thursday, with the major averages all sliding into negative territory after turning in a mixed performance earlier in the session. The tech-heavy Nasdaq has fallen to its lowest intraday level in over a month.

The notable weakness that has emerged on Wall Street comes on the final day of what has already been a disappointing month for stocks.

Going into today’s trading, the Dow was down 2.7 percent for the month of September, while the S&P 500 and the Nasdaq were down by 3.6 percent and 4.9 percent, respectively.

Traders are also keeping an eye on Washington after Senate Majority Leader Chuck Schumer, D-N.Y., announced an agreement on a stopgap spending bill to avoid a government shutdown.

The proposed legislation, which would fund the government through December 3rd, also includes spending on hurricane relief and Afghan refugee resettlement.

Schumer said the Senate would vote on the legislation later today, although the bill would still need to pass the House before a midnight deadline.

Even if a government shutdown is avoided, the U.S. still faces a potential default amid an impasse over raising the debt ceiling.

Treasury Secretary Janet Yellen has warned of “catastrophic economic consequences” if the debt ceiling is not raised by October 18th.

Powell’s prepared remarks mirrored those he delivered before the Senate Banking Committee on Tuesday, with the Fed chief warning of upside risks to inflation.

Traders are also digesting the latest economic data, including a report from the Labor Department showing initial jobless claims unexpectedly increased for the third straight week in the week ended September 25th.

With the unexpected increase, jobless claims climbed further off the pandemic-era low of 312,000 set in the week ended September 4th.

Tobacco stocks have moved sharply lower over the course of the session, dragging the NYSE Arca Tobacco Index down by 2.5 percent.

Altria (MO) and Philip Morris (PM) are posting steep losses after the International Trade Commission ruled the tobacco producers must halt imports and sales of their IQOS heated tobacco device in a patent case brought by rival R.J. Reynolds.

Significant weakness also remains visible among airline stocks, as reflected by the 2.1 percent drop by the NYSE Arca Airline Index.

Housing stocks have also come under pressure as the day has progressed, with the Philadelphia Housing Sector Index slumping by 2 percent to its lowest intraday level in six months.

Retail, commercial real estate and brokerage stocks have also moved to the downside, while gold stocks remain sharply higher amid a spike by the price of the precious metal.

In overseas trading, stock markets across the Asia-Pacific region turned in a mixed performance during trading on Thursday. Japan’s Nikkei 225 Index fell by 0.3 percent, while China’s Shanghai Composite Index advanced by 0.9 percent.

Meanwhile, the major European markets all moved to the downside on the day. While the U.K.’s FTSE 100 Index dipped by 0.3 percent, the French CAC 40 Index and the German DAX Index slid by 0.6 percent and 0.7 percent, respectively.

In the bond market, treasuries have moved higher over the course of the session after initially showing a lack of direction. As a result, the yield on the benchmark ten-year note, which moves opposite of its price, is down by 2.4 basis points at 1.517 percent.