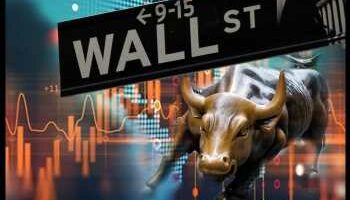 Stocks fluctuated after an early move to the upside during trading on Friday but managed to remain mostly positive throughout the session. The major averages extended a recent upward trend, reaching new record closing highs.

The continued strength on Wall Street came after the Labor Department released a report showing U.S. employment increased by more than expected in the month of October.

The report said non-farm payroll employment surged up by 531,000 jobs in October after climbing by an upwardly revised 312,000 jobs in September.

Economists had expected employment to jump by 425,000 jobs compared to the addition of 194,000 jobs originally reported for the previous month.

The Labor Department described the job growth as widespread, with notable job gains in leisure and hospitality, professional and business services, manufacturing, and transportation and warehousing.

The upbeat jobs data added to optimism about the outlook for the economy despite lingering concerns about supply chain issues and rising inflation.

Stocks also continued to benefit from recent upward momentum, which has lifted the major averages to record highs on largely upbeat earnings news.

Signals the Federal Reserve is not in a hurry to raise interests also continued to generate buying interest even as the central bank begins scaling back its asset purchases.

Gold stocks moved sharply higher over the course of the trading session, driving the NYSE Arca Gold Bugs Index up by 3.2 percent.

The rally by gold stocks came as the price of the precious extended the spike seen in the previous session, with gold for December delivery jumping $23.30 to $1,816.80 an ounce.

Significant strength was also visible among housing stocks, as reflected by the 1.8 percent gain posted by the Philadelphia Housing Sector Index. The index ended the session at its best closing level in two months.

Oil, natural gas, and semiconductor stocks also saw notable strength on the day, while biotechnology stocks showed a substantial move to the downside.

Meanwhile, the major European markets moved to the upside on the day. While the French CAC 40 Index advanced by 0.8 percent, the U.K.’s FTSE 100 Index rose by 0.3 percent and the German DAX Index edged up by 0.2 percent.

In the bond market, treasuries moved notably higher, extending the advance seen over the course of the previous session. As a result, the yield on the benchmark ten-year note, which moves opposite of its price, slid 7.1 basis points to 1.453 percent.

Following the major economic events seen over the past week, next week’s trading may be impacted by reaction to reports on producer and consumer prices and consumer sentiment.

Earnings news may also continue to attract attention, with a number of well-known companies due to report their quarterly results.