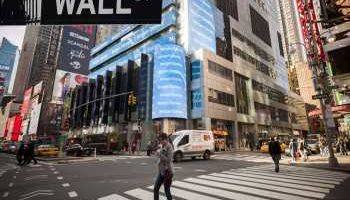 U.S. Stocks Showing A Lack Of Direction In Morning Trading

Stocks have seen considerable volatility over the course of morning trading on Thursday, with the major averages showing wild swings back and forth across the unchanged line. The choppy trading comes on the heels of the strong upward move seen in the previous session.

The volatility on Wall Street comes as some traders look to cash in on the strong gains seen earlier this week, while others continue to express optimism about an economic recovery as states ease lockdown restrictions.

The advance seen in the previous session lifted the Nasdaq to a three-month closing high, while the S&P 500 reached its best closing level since early March.

The tech-heavy Nasdaq has shown a particularly strong recovery from its March lows and ended Wednesday’s trading less than 5 percent below the record high set in February.

The report said initial jobless claims dropped to 2.438 million in the week ended May 16th, a decrease of 249,000 from the previous week’s revised level of 2.687 million.

Economists had expected jobless claims to tumble to 2.400 million from the 2.981 million originally reported for the previous week.

Jobless claims fell for the seventh straight week after reaching a record high of 6.867 million in the week ended March 28th.

The total number of new claims since the coronavirus-induced lockdowns began in mid-March still reached 38.6 million.

Meanwhile, the National Association of Realtors released a report showing another steep drop in U.S. existing home sales in the month of April.

The continued nosedive pulled existing home sales down to their lowest level since hitting 3.45 million in July of 2010.

Most of the major sectors are showing only modest moves on the day, contributing to the choppy trading by the broader markets.

Gold stocks have shown a substantial move to the downside, however, with the NYSE Arca Gold Bugs Index plunging by 4.8 percent. The index continues to pull back after reaching a seven-year intraday high in early trading on Wednesday.

The sell-off by gold stocks comes amid a nosedive by the price of the precious metal, as gold for June delivery is plunging $32.20 to $1,719.90 an ounce.

In the bond market, treasuries are extending the upward move seen over the two previous sessions. Subsequently, the yield on the benchmark ten-year note, which moves opposite of its price, is down by 1.8 basis points at 0.662 percent.