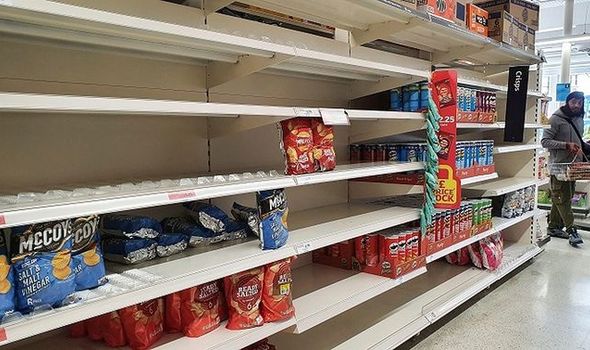 For now customers will have the more limited choice of classics such as cheese and onion, ready salted and salt and vinegar. A few other products such as Quavers and Wotsits will also be prioritised. In recent days customers have reported products unavailable online and empty shelves in some shops across the country. Walkers has said it is working “round the clock” to resolve the issues but warns disruption could continue for several more weeks.

A spokesperson explained: “A recent IT system upgrade has disrupted the supply of some of our products.

“Our sites are still making crisps and snacks but at a reduced scale.

“We’re doing everything we can to increase production and get people’s favourites back on shelves. We’re very sorry for the inconvenience caused.”

In Walker’s instance the fault stems from issues with a new computer system at the Leicester-based company’s factory.

However it comes at a time of widespread issues for global supply chains as economies re-open post-pandemic and in the last few months, various other firms have been hit.

In August McDonald’s customers reported a shortage of milkshakes and bottled water while in the same month Nandos has to close some restaurants due to a shortage of both chicken and workers.

More recently Wetherspoons experienced a shortage of salt in its pubs leading to some customers attempting to bring their own.

A particular crunch point in the UK has been shortages of delivery drivers which recently sparked a crisis over petrol with delays to deliveries leading to panic buying.

The Government has pledged to recruit thousands more lorry drivers in the run-up to Christmas in a sector which has struggled with long hours and low pay.

According to the Government Sir David’s duties will include: “identifying the causes of current blockages and pre-empting potential future ones, and advising on resolutions either through direct government action or through industry with Government support.”

The move came as data from the Office for National Statistics found one in six adults had struggled to buy essential food items between September 22nd and October 3rd.

Last week the British Retail Consortium warned of the effects labour shortages and supply chain issues were having, with costs inevitably filtering through to the consumer.

BRC Chief Executive Helen Dickinson said: “A BRC survey showed three in five retailers expect prices to increase in the run-up to Christmas, and the ongoing labour shortages are making the situation worse.”

“Retailers continue to do all they can to ensure value for money for customers and are looking to work with Government to find a long-term solution to these shortages, otherwise it is the British consumer, who already face higher energy bills this winter, who will suffer the consequences.”