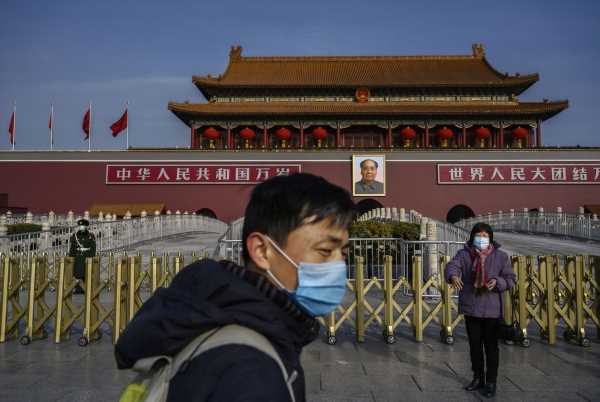 Terms of Trade is a daily newsletter that untangles a world threatened by trade wars. Sign up here.

In any normal year, China’s political class would be convening around now inside Beijing’s Great Hall of the People to rubber-stamp the year’s targets for economic growth and the policies to make it happen.

Instead, the Chinese capital is hushed. Large gatherings are called off as the nation and the rest of the world grapple with the coronavirus that’s killed thousands and stopped output in China and is now spreading on multiple continents.

The inability of officials to meet, however, is not the only reason China is yet to unveil a comprehensive plan to reboot the world’s second-largest economy as the virus sends it tumbling toward a practically unheard-of quarterly contraction.

While still fighting a health emergency, President Xi Jinping’s government now also has to decide how much to spend and on what, mindful of the risks long posed by a large debt burden and the declining usefulness of yet more new roads and railways. Much will also depend on whether it wants to preserve the growth target of “about 6%” it was originally expected to set within the Great Hall.

If it does keep aiming high then a scale of stimulus not seen since the 4 trillion yuan ($577 billion) wave after the Great Recession will be required. That would likely help support slumping global growth too.

For now, the wait-and-see approach is being fed by government statistics indicating that the epidemic itself is being brought under control, which may save Beijing the need to spend big.

“The government has not brought out the big stimulus guns, because they want to wait to see the extent to which activity can recover on its own,” said Andy Rothman, a former U.S. diplomat in Beijing who’s now an investment strategist at Matthews Asia.

In Hubei province, the epicenter of the virus outbreak, new cases have been gradually trending down to an average of less than 150 per day this week compared to above 400 a week ago. Fresh cases elsewhere have slowed to a trickle with most provinces reporting no new cases in consecutive days and only sporadic infections.

That development is comforting believers in an imminent ‘v-shaped’ recovery. Shares in Merck KGaA surged this week after the company said the impact of the virus will probably subside in the second quarter, and shave only 1% from revenue.

Yet anecdotal reports from across China’s vast east-coast manufacturing heartland suggest much of the nation’s industrial capacity remains idle or is running at less than full capacity. Amid curbs on transport and strict anti-virus measures, the ‘resumption rate’ remains somewhere around 80% or lower.

We had anticipated the pace of restoration to pick up. That doesn’t appear to be happening. Staff availability is probably still a constraint for smaller firms. This may persist for the next week or two. Even so, we expect the operating rate to continue to climb. This is a priority for the government — and it has many levers to achieve its objective.

A further risk is that because of the decline in new infections, the economy will restart and workers will return too soon.

Ben Cowling, a professor of epidemiology and biostatistics at Hong Kong University, warns of a possible second wave in China as business resume and people come back to work and mingle with one another. Large cities are also vulnerable to infections coming in from overseas through trade links.

“In other cities in China the total number of cases has been very low, and they are still vulnerable to an epidemic,” Cowling said.

There’s also mistrust over China’s official statistics, which have been repeatedly revised through the course of the outbreak, including an extraordinary addition of nearly 15,000 cases of infection on Feb. 13. It’s changed the definition of what is a confirmed case of infection multiple times.

In this uncertain environment, officials also face a difficult task in deciding how to calibrate stimulus without once again loosening what have been tight reins on borrowing; with total debt now heading toward three times the size of the economy, financial stability has been a top priority.

An aggressive stimulus package could involve bigger interest rate cuts than the small tweaks to market rates already enacted, a flush of liquidity via lower bank reserve ratios, and a combination of tax cuts and infrastructure spending. Yet much of that was already expected for this year even before the virus hit, as the economy was already in a long-term slowdown.

The outlook for infrastructure spending in particular is clouded by a lack of suitable large-scale projects — China already has the world’s largest high-speed rail network — and funding constraints at the local level.

In short, the design of a stimulus package is much harder than it used to be.

Nevertheless, China’s economy is in danger of being hit from both sides as the rest of the world economy wobbles too, according to David Loevinger, a former China specialist at the U.S. Treasury and now an analyst at fund manager TCW Group Inc. in Los Angeles.

“China needs even more stimulus since it’s now being hit by both a domestic and external shock,” said Loevinger.