Europe’s energy crunch has returned with a winter vengeance. We are back to warnings of power rationing and industrial stoppage, a looming disaster for the European Commission and the British government alike.

Vladimir Putin has tightened his stranglehold on gas, driving up futures contracts for January by 40 per cent in barely a week. Prices are nearing the levels of September’s panic. The difference this time is that the underlying geopolitical crisis is an order of magnitude more serious. 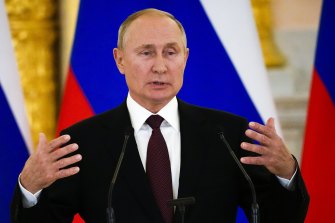 Vladimir Putin has tightened his stranglehold on gas, driving up futures contracts for January by 40 per cent in barely a week.Credit:AP

Putin has already prepared the ground for the perfect energy squeeze. He took advantage of the world’s post-pandemic gas shortage over to withhold the top-up flows needed to replenish Europe’s depleted storage.

Other than short bursts of extra supply, almost as a tease, Gazprom has been delivering minimum contract volumes. Inventories are currently 52 per cent in Austria, 61 per cent in Holland, 69 per cent in Germany at a time of year when they should be near 100 per cent.

The Kremlin is now closing the trap. Energy analysts ICIS says Gazprom booked “nothing” for December through the Mallnow metering point on the Polish-Belarus pipeline. Europe is facing a supply-deficit of 32 million cubic metres a day. By ill luck, Algerian flows have been cut by an intractable dispute with Morocco.

“It is hard to know whether Putin is leveraging the energy weapon to try to reverse Europe’s green deal or whether this is really about preparations for an attack on Ukraine,” said Professor Alan Riley from the Atlantic Council.

“But he has to be careful because if he plays this card, he can never play it again. Europe will redesign its energy system and stop buying Russian gas altogether,” he said.

Whatever Putin’s plans for Ukraine possibly seizure of the Donbass and the Black Sea coast as far as Odessa, a parallel showdown with Brussels over the Baltic Nord Stream 2 pipeline looks certain to escalate.

German regulators have suspended the certification process because Gazprom was trying to get around EU monopoly laws. They had no choice: a stitch-up had become impossible. “Poland would have issued an immediate injunction to stop it at the European Court,” said Professor Riley. 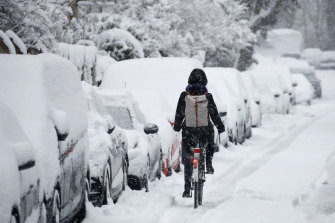 With winter fast approaching, Europe is facing an energy crisis.Credit:AP

The Greens are about to enter the German government and they think Nord Stream is scandalous, Kremlin imperialism with no purpose other than diverting existing gas flows from the Ukraine pipeline and depriving Kiev of its means of economic self-defence. Putin will not back down lightly since Nord Stream 2 is central to his drive to alter the strategic balance of power in Europe, and overturn the post-Cold War settlement. The chances are that he will keep stoking the gas crisis until a frozen Europe begs for mercy, or tears itself apart.

Thierry Bros, a former energy security planner for the French government, said Brussels has stumbled blindly into a Kremlin ambush. “Putin set his master plan in motion last July and August. I didn’t believe it at first but now there can be no doubt. He told us we’d be getting more gas in October but it never came, and November has been worse, and now there’s going to be nothing through Mallnow,” he said.

“Europe has failed to follow the Churchillian precept of security of supply and has got itself into an existential crisis of its own making out of sheer incompetence. This could cause a breakdown of the EU’s integrated energy system and lead to the collapse of the whole bloc,” he said.

EU states resorted instantly to health nationalism at the onset of COVID-19. Germany blocked exports of PPE equipment without compunction, even within the single market and after the goods had been paid for.

Mr Bros said the lip-service pieties of the EU energy market are likely to prove just as hollow if push comes to shove. Countries may invoke national security laws and hoard whatever energy they have rather than feeding it into the common pool.

“We’re running into a presidential election in France. People will scream if our industries are being shut and we’re told we have to accept rationing in order to heat the Germans,” he said.

For the British to rely on energy interconnectors from Europe in such circumstances shows touching faith in paper contracts. The UK imports little Russian gas but that is less reassuring than it sounds. It is part of Europe’s integrated nexus, and cross-Channel prices move in near lockstep. In one crucial respect the UK is in worse shape: it allowed the Rough storage site to close, to save pennies, and against vehement warnings, leaving this country nakedly exposed with just days of winter back-up.

The Government made a bet that the UK could always, and easily, obtain liquefied natural gas on the global market. But this country now finds itself in a bidding war for scarce LNG supplies with China, which is armed with $US3.2 trillion of foreign exchange reserves and has ordered officials to secure energy as a matter of regime survival. The Asia spot price has just hit the once unthinkable level of $US32 per MBBtu, if you can get it. 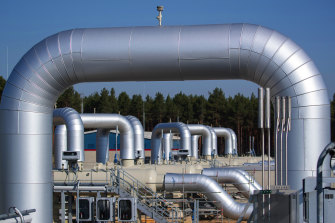 A compressor station in Germany which accommodates gas flows from the Nord Stream 2 project.Credit:Bloomberg

If the Government has not already created an “energy war room” with emergency powers, it should do so forthwith. My fear is that we will drift into something akin to the COVID debacle of February 2020, when officials professed cheery confidence in their contingency plans (for a flu pandemic), heroically ignoring what the virus was already doing in Italy.

Britain has advantages. Half its gas comes from internal supply on the Continental Shelf, unlike dependent Europe. Its service economy has a lower energy intensity ratio than Germany.

It has useful friends. The Emir of Qatar has diverted LNG cargoes to the UK after a friendly chat with Boris Johnson, the fruit of tight defence, cultural, and royal ties. The Qataris turned down a similar request from Brussels because of an antitrust dispute over sales contracts. Might one discern a Brexit dividend in this?

Offshore wind is working as it should and has dented the exorbitant bill for imported gas. Renewables have made up 32 per cent of the UK’s power over the last week. Be thankful for small mercies. Drax has 1.3 gigawatts of coal capacity in reserve that could be cranked up quickly.

The UK could follow Japan and switch some gas plants to oil, currently trading at half the price of spot LNG ($US180 equivalent). It could in extremis book LNG cargoes and hold the tankers at anchor as emergency storage. The Government could extend the life of the Hunterston B nuclear plant for a few months until we got through the worst.

Clive Moffatt, an expert on energy security, said it is already too late. “There’s no short-term fix to this. The grid is going to have to shut down industrial gas users. That is the only way to keep hospitals open and homes heated,” he said. But if I had to choose, I’d rather be in Boris’s Britain this winter, than Ursula’s Europe.