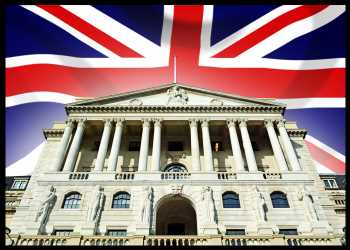 The Bank of England unexpectedly cut its key interest rate and launched a new funding scheme for small businesses as it expects the UK economy to take a major hit due to the coronavirus, or Covid-19, outbreak.

The Monetary Policy Committee unanimously voted to cut the bank rate by 50 basis points to a record low 0.25 percent, following a special meeting on March 10, the central bank said in a statement on Wednesday.

The MPC also voted unanimously to introduce a new Term Funding scheme with additional incentives for Small and Medium-sized Enterprises, or TFSME, financed by the issuance of central bank reserves.

“Although the magnitude of the economic shock from Covid-19 is highly uncertain, activity is likely to weaken materially in the United Kingdom over the coming months,” the Bank of England said.

“These measures will help to keep firms in business and people in jobs and help prevent a temporary disruption from causing longer-lasting economic harm,” the central bank added.

The measures are part of a comprehensive stimulus package to support the UK economy amid the economic shock from Covid-19. Economists expect these to be part of a coordinated monetary and fiscal response to the virus outbreak impact.

As of Wednesday morning, there were 382 coronavirus cases and six deaths from the infection in the UK. The health minister Nadine Dorries also tested positive for the virus.

The special measures were announced just hours ahead of the budget presentation by Chancellor Rishi Sunak.

“We believe he will announce an extra package of measures (perhaps worth GBP 5 billionn or 0.2 percent of GDP) aimed directly at supporting businesses and households during the coronavirus outbreak in addition to a large-scale, long-term infrastructure spending spree,” Capital Economics economist Paul Dales said.

The BoE said it will take all further necessary steps to support the UK economy and financial system.

Further measures depend on the severity of the virus outbreak, economists said.

“The lower bound is generally perceived to be a little above zero, perhaps 0.05 percent, which would leave another 20bp rate cut available,” ING economist James Smith said.

“However the Bank would then quickly turn to quantitative easing (QE) – probably both in the form of government and corporate bond purchases.”

The previous change in the bank rate was a quarter-point hike in August 2018. The latest cut will also be the last from Governor Mark Carney who is stepping down on March 15 and will be succeeded by Andrew Bailey.

Under the TFSME, the bank will offer, over the next 12 months, four-year funding of at least 5 percent of participants’ stock of real economy lending at interest rates at, or very close to, Bank Rate.

Additional funding will be available for banks that increase lending, especially to small and medium-sized enterprises, the central bank said.

Citing its experience from a previous such scheme in 2016, the bank said it suggested that the TFSME could provide in excess of GBP 100 billion in term funding.

The BoE hopes the reduction in Bank Rate will boost business and consumer confidence at a difficult time and bolster the cash flows of businesses and households. The move is also expected to reduce the cost and to improve the availability of finance.

As part of the package, the Financial Policy Committee lowered the UK countercyclical capital buffer rate to 0 percent of banks’ exposures to UK borrowers from 1 percent.

The FPC expects to maintain the 0 percent rate for at least 12 months, so that any subsequent increase would not take effect until March 2022 at the earliest. Previously, the rate was projected to reach 2 percent by December 2020.

The FPC sees the economic shock from the Covid-19 to be “sharp and large”, but “temporary”.

Consequently, the core banking system is likely to suffer less impact and should be able to meet the credit needs of households and businesses during a difficult period, the central bank said, citing results from recent bank stress tests.

The Prudential Regulation Authority asked banks not to increase dividends or other distributions, such as bonuses, in response to these policy actions.

The PRA invited requests from insurance companies to use the flexibility in Solvency II regulations to recalculate the transitional measures that smooth the impact of market movements, in the backdrop of the material fall in government bond yields in recent weeks. This will support market functioning, the central bank said.

The BoE also said that it has operations in place to make loans to banks in all major currencies on a weekly basis. Banks have pre-positioned collateral with the central bank that will enable them to borrow around GBP 300 billion through these facilities.