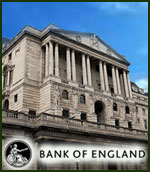 The Bank of England hinted at “modest tightening” in a three-year horizon as policymakers expect inflation to temporarily reach 4 percent. The bank kept its key interest rate and quantitative easing unchanged on Thursday.

The central bank cautioned that the economy is set to undergo a “more pronounced” period of above-target inflation in the near-term than previously projected, before returning close to the 2 percent over the medium-term.

The Monetary Policy Committee voted 8-0 to leave the key interest rate unchanged at a historic low of 0.10 percent.

Michael Saunders observed at the latest MPC meeting that the economic outlook warranted a reduction in the scale of monetary policy stimulus. The policymaker said inflation was likely to remain above the 2 percent target two and three years ahead with the existing policy stance.

The MPC judged that some modest tightening of monetary policy over the forecast period was likely to be necessary to meet the inflation target sustainably in the medium term, the bank said in its monetary policy summary.

The first rate hike is likely to come in early 2023, or perhaps a little earlier, ING economist James Smith said.

While the bank is starting to signal that policy will be tightened, it is not suggesting it’s going to be tightened soon, Ruth Gregory, an economist at Capital Economics, said.

“What’s more, we think inflation will be a bit lower next year than the Bank expects, which suggests policy won’t be tightened until mid-2023, rather than the mid-2022 date priced into the markets,” Gregory added.

The bank indicated that it intends to reduce its stock of assets purchased by not reinvesting maturing assets once the bank rate has risen to 0.50 percent.

According to the Monetary Policy Report, inflation is likely to rise temporarily to 4 percent in the fourth quarter of this year. This was 1.5 percentage points higher than estimated in May.

Nonetheless, inflation will fall back and return close to the 2 percent target in the medium term, the bank noted.

The UK economy was expected to have grown by 5 percent in the second quarter of 2021, leaving it around 4 percent below its pre-pandemic level and slightly stronger than expected in the May Report.

GDP was projected to grow around 3 percent in the third quarter of 2021, somewhat weaker than expected in May. Thereafter, the economy is forecast to recover further, reaching its pre-pandemic level in the fourth quarter of 2021.