Can we put a price tag on a life? COVID-19 shutdown forces a new look

Can we measure the cost of hundreds of thousands of dead?

President Donald Trump and leading business figures are increasingly questioning the wisdom of a prolonged shutdown of the US economy — already putting millions out of work — to curb the spread of the coronavirus pandemic.

"Our people want to return to work," Trump declared Tuesday on Twitter, adding, "THE CURE CANNOT BE WORSE (by far) THAN THE PROBLEM!" 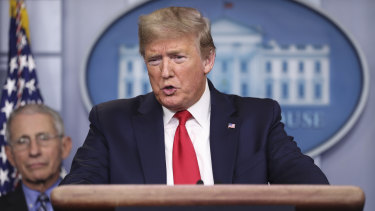 US President Donald Trump said he envisions “packed” US churches on Easter Sunday as he described his ambition to abandon stringent public-health measures and re-open the US economy in mid-April. Credit:Bloomberg

In essence, he was raising an issue that economists have long grappled with: How can a society assess the trade-off between economic well-being and health?

"Economists should be doing this cost-benefit analysis," said Walter Scheidel, an economic historian at Stanford University. "Why is nobody putting some numbers on the economic costs of a month-long or a year-long shutdown against the lives saved? The whole discipline is well-equipped for it. But there is some reluctance for people to stick their neck out."

Some economists who support lifting the current restrictions on economic activity say state governors and even the Trump administration have not sufficiently assessed the costs and benefits of those restrictions.

We put a lot of weight on saving lives. But it's not the only consideration.

"We put a lot of weight on saving lives," said Casey Mulligan, a University of Chicago economist who spent a year as chief economist on Trump's Council of Economic Advisers. "But it's not the only consideration. That's why we don't shut down the economy every flu season. They're ignoring the costs of what they're doing. They also have very little clue how many lives they're saving."

There is, however, a widespread consensus among economists and public health experts that lifting the restrictions would impose huge costs in additional lives lost to the virus — and deliver little lasting benefit to the economy.

"It's useful to adopt the cost-benefit frame, but the moment you do that, the outcomes are so overwhelming that you don't need to fill in the details to know what to do," said Justin Wolfers, an economist at the University of Michigan.

The only case in which the benefits of lifting restrictions outweigh the costs in lost lives, Wolfers said, would be if "the epidemiologists are lying to us about people dying."

Weighing economic costs against human lives will inevitably seem crass. But societies also value things like jobs, food and money to pay the bills — as well as the ability to deal with other needs and prevent unrelated misfortunes.

"Making people poorer has health consequences as well," said Kip Viscusi, an economist at Vanderbilt University who has spent his career using economic techniques to assess the costs and benefits of government regulations.

Jobless people sometimes kill themselves. The poor are likelier to die if they get sick. Viscusi estimates that across the population, every loss of income of $100 million in the economy causes one additional death.

Government agencies calculate these trade-offs regularly. The US Environmental Protection Agency, for instance, has established a cost of about $US9.5 million ($15.9 million) per life saved as a benchmark for determining whether to clean up a toxic waste site.

Other agencies use similar values to assess whether to invest in reducing accidents at an intersection or to tighten safety standards in a workplace. The US Department of Agriculture has a calculator to estimate the economic costs — medical care, premature deaths, productivity loss from nonfatal cases — of food-borne disease.

Now, some economists have decided to stick their necks out and apply this thinking to the coronavirus pandemic.

In a paper released on Monday, Martin S. Eichenbaum and Sergio Rebelo of Northwestern University, with Mathias Trabandt of the Free University in Berlin, used the EPA's number to figure the optimal way to slow the spread of the disease without economic costs that exceed the benefits.

The economy would contract sharply even without a government-imposed lockdown as people chose to stay away from workplaces and stores, hoping to avoid contagion. In that case of voluntary isolation, Eichenbaum and his colleagues estimated that US consumer demand would decline by $US800 billion in 2020, or about 5.5 per cent.

Based on epidemiological projections, as the virus ran unchecked, it would quickly expand to infect somewhat over half the population before herd immunity would slow its course. Assuming a death rate of about 1 per cent of those infected, about 1.7 million Americans would die within a year.

A policy to contain the virus by reducing economic activity would slow the progression of the virus and reduce the death rate, but it would also impose a greater economic cost.

Eichenbaum and his colleagues say the "optimal" policy — assessing economic losses alongside lives — requires restrictions that slow the economy substantially. Under their approach, the decline in consumption in 2020 more than doubles, to $US1.8 trillion, but the deaths drop by half a million people. That would amount to $US2 million in lost economic activity per life saved.

In this instance, "you want to make the recession worse," Eichenbaum said. But an important corollary is that there are limits to the sacrifice: Beyond a certain point, it would not be worth it to lose more economic activity in order to save more people.

The model, he noted, is heavily dependent on the assumptions that go into it, meant to convey the magnitude of the trade-offs. And the economists are still tweaking. The cost-benefit ratio will change if one considers that the health system might become overwhelmed by COVID-19 cases, increasing mortality rates. That would justify a more aggressive lockdown that ramped up more quickly.

It comes down to what a life is worth.

In the 1960s, a Nobel Prize laureate in economics, Thomas C. Schelling, proposed letting people price their own lives. Observing how much they were willing to spend to reduce their odds of death — by buying a bicycle helmet, driving within the speed limit, refusing to buy a house near a toxic-waste site or demanding a higher wage for a more dangerous job — government agencies could compute a price tag.

That can lead to some strange numbers, though. As ethical philosopher Peter Singer noted, you can save a life in poor countries with $US2,000 or $US3,000, and many of those lives are still allowed to be lost. "If you compare that with $US9 million," he said, "it's crazy."

Cass Sunstein, a legal scholar who worked for the Obama administration, heading the White House office in charge of these valuations, once proposed focusing government policies on saving years of life rather than lives, as is customary in other countries.

In the George W. Bush administration, the EPA tried to move in Sunstein's preferred direction. To calculate the costs and benefits of legislation regulating soot emissions from power plants, it had to figure out the value of reducing premature mortality. Rather than evaluate every life saved at $US6.1 million, as it had done in the past, it applied an age discount: People over 70 were worth only 67 per cent of the lives of younger people.

The backlash by AARP and others was fierce. And the agency dropped the idea. "EPA will not, I repeat, not use an age-adjusted analysis in decision-making," pleaded Christine Todd Whitman, the EPA administrator at the time. Yet by putting the same price on all lives, the agency implicitly devalued young people's remaining years.

COVID-19 seems to be much more lethal for older people, whatever their economic worth. But Trump declared on Tuesday that even while those most at risk are safeguarded, the economy could be "raring to go" within three weeks.

"Seniors will be watched over protectively & lovingly," he said on Twitter. "We can do two things together."