China’s power crunch set to be its next financial shock

China may be diving head first into a power supply shock that could hit Asia’s largest economy hard just as the Evergrande crisis sends shockwaves through its financial system.

The crackdown on power consumption is being driven by rising demand for electricity and surging coal and gas prices as well as strict targets from Beijing to cut emissions. It’s coming first to the country’s mammoth manufacturing industries: from aluminum smelters to textiles producers and soybean processing plants, factories are being ordered to curb activity or – in some instances – shut altogether. 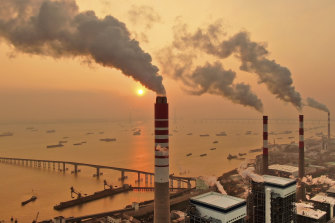 The crackdown on power consumption is being driven by rising demand for electricity and surging coal and gas prices as well as strict targets from Beijing to cut emissions.Credit:AP

Almost half of China’s 23 provinces missed energy intensity targets set by Beijing and are now under pressure to curb power use. Among the worst hit are Jiangsu, Zhejiang and Guangdong – a trio of industrial powerhouses that account for nearly a third of China’s economy.

“With market attention now laser-focused on Evergrande and Beijing’s unprecedented curbs on the property sector, another major supply-side shock may have been underestimated or even missed,” Nomura Holding analysts including Ting Lu warned in a note, predicting China’s economy will shrink this quarter.

The worsening power crunch in China – perhaps overshadowed by the attention on whether Evergrande will default on its mammoth debts – reflects extremely tight energy supply globally that’s already seen chaos engulf markets in Europe. The economic rebound from Covid lockdowns has boosted demand from households and businesses as lower investment by miners and drillers constrains production.

But China’s energy crisis is partially of its own making as President Xi Jinping tries to ensure blue skies at the Winter Olympics in Beijing next February and show the international community he’s serious about de-carbonising the economy.

The economy is at risk of a severe shortage of coal and gas – used to heat homes and power factories – this winter. It’s had to ration power in the colder months before but it’s never had to do it with global prices of these fuels at the levels they are now.

China’s heating coal futures have more than quadrupled in the past month, smashing new records over and over as concerns over mine safety and pollution constrain domestic output while it continues to ban shipments from top supplier Australia. Meanwhile, natural gas prices from Europe to Asia have surged to seasonal highs as countries try outbid each other for fast-depleting supplies.

“The power curbs will ripple through and impact global markets. Very soon the global markets will feel the pinch of a shortage of supply from textiles, toys to machine parts.”

In previous winter power surges in China, many have turned to diesel generators to plug the shortages of power from the electricity grid. The year, the danger is government policies have further limited the energy industry’s potential to increase production to meet the demand increase, said Zeng Hao, chief expert at consultancy Shanxi Jinzheng Energy.

Yunnan Aluminum Co., a $US9 billion ($12.4 billion) producer of the metal used in everything from cars to soft drink cans, has curtailed output due to pressure from Beijing. The shock is also being felt in China’s giant food sector. Soybean crushers, which process the crop into edible oils and animal feed, were ordered to shut this week in the city of Tianjin.

According to Nikkei, suppliers to Apple and Tesla halted production at some of their sites in China on Sunday. Foxconn’s facilities in Longhua, Guanlan, Taiyuan and Zhengzhou – the world’s largest iPhone manufacturing complex – remained unaffected by the power-supply restrictions, the report said.

A number of smaller companies are also starting to inform the stock exchange they’ve been ordered to curb or halt activity. While they may be overlooked by major foreign investors that don’t cover these firms, the end result could be a shortage of everything from textiles to electronics components that could snarl supply chains and eat into the profits of a host of multinational companies. 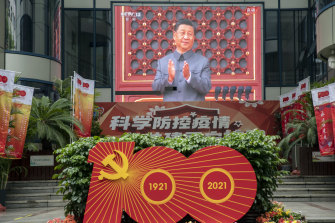 Almost half of China’s 23 provinces missed energy intensity targets set by Beijing and are now under pressure to curb power use.Credit:Bloomberg

In Jiangsu, a province near Shanghai with an economy almost as big as Canada’s, steel mills have closed and some cities are turning off street lights. In nearby Zhejiang, about 160 energy-intensive companies including textiles firms were shuttered. While in Liaoning in the far north, 14 cities have ordered emergency power cuts that were blamed partly on the surging coal prices.

“The power curbs will ripple through and impact global markets,” Nomura’s Ting said. “Very soon the global markets will feel the pinch of a shortage of supply from textiles, toys to machine parts.”

The curtailments are a fresh threat for an economy facing multiple pressures after a V-shaped rebound in the past year. And as with Europe’s energy ructions, the squeeze poses a challenge for policy makers: how to pursue environmental goals without damaging still-fragile economies. Beijing is targeting full-year growth of 6 per cent after expansion of 12.7 per cent in the first half.

“Policy makers seem to be willing to accept slower growth in the rest of this year in order to meet the carbon emissions target,” said Larry Hu, head of China economics at Macquarie Group. “The GDP goal of more than 6 per cent is easily achievable, but emissions targets are not easy to hit given robust growth in the first half.”