Citigroup Inc. (C) stock has sold off more than 15% in two days after The Wall Street Journal alleged that the banking giant could get reprimanded by regulators for failing to improve risk management systems. Weak August credit card metrics and a revenue warning have added to selling pressure, which has dropped the stock to the lowest low since May. It has also broken support at the 50-day exponential moving average (EMA) after a three-month test, raising the odds that it will eventually test March's eight-year low.

The SPDR S&P Bank ETF (KBE) has barely budged during the same period, indicating that Citi's downdraft is company specific, rather than a contagion likely to spread into other big banks. Even so, the sector continues to underperform broad benchmarks, with many issues stuck in the lower half of the first quarter trading range. Historically low interest rates and a bearish economic outlook have underpinned this laggard behavior, which may continue into 2021.

Wall Street has been slow to react to the negative news flow, maintaining a "Strong Buy" rating based upon 14 "Buy," 1 "Hold," and just 1 "Sell" recommendation. Price targets currently range from a low of $56 to a Street-high $87, while the stock has dropped from $5 to $11 below the low target in the past two sessions. This placement strongly indicates that analysts have been over-optimistic about the stock's long-term outlook in providing advice to potential investors.

A contagion is the spread of an economic crisis from one market or region to another and can occur at both a domestic or international level. 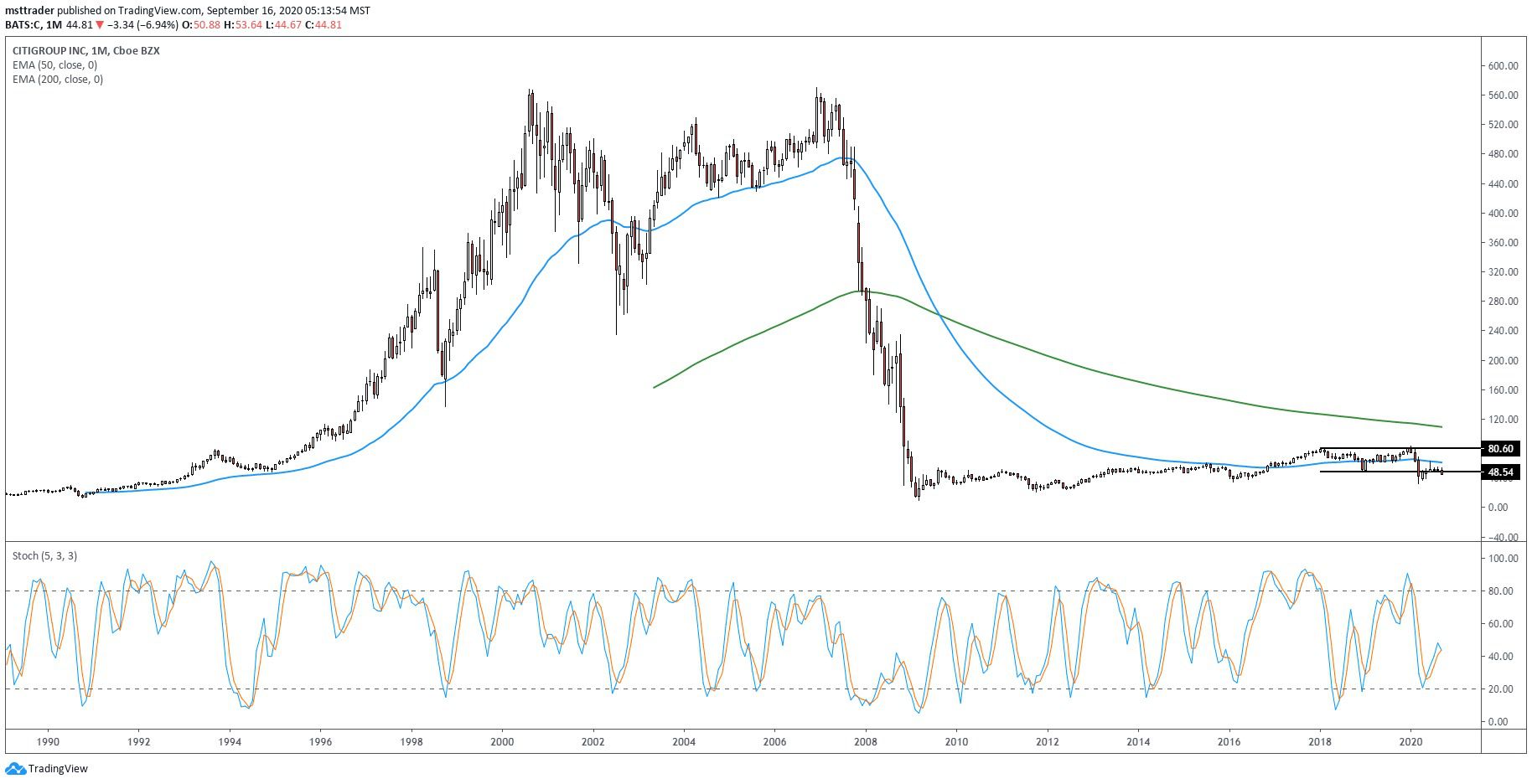 The stock roared through the 1990s, splitting seven times during an ascent that topped out at $551 in 2000. It sold off to $228 during the bear market and popped back above $500 in 2004 before easing into a shallow trajectory that posted an all-time high at $570 in 2007. The bottom dropped out during the 2008 economic collapse, dumping the stock into a near death-spiral that ended in the single digits in the first quarter of 2009.

A bounce into the mid-$50s a few months later marked resistance for the next seven years, ahead of a breakout following the 2016 presidential election. This rally impulse stalled above $80 in the first quarter of 2018, yielding a steep decline into the $40s, followed by a 2019 recovery wave that mounted the prior high by a few points before turning tail in February 2020. The decline into March found support just under the 2016 low in the low $30s, giving way to a bounce that failed at the 50-month and 200-day EMAs in June.

The on-balance volume (OBV) accumulation-distribution indicator fell to a multi-year low at the end of 2018 and turned higher in an accumulation wave that ended in April 2019. OBV ground sideways near resistance into 2020 and plunged into the prior low during the first quarter's pandemic swoon. Modest buying interest fizzled out in June, yielding a slow-motion exodus that accelerated to hurricane force this week, breaking the 2018 low.

Meanwhile, price action crushed support at the 2018 low in the first quarter and remounted that formidable barrier in late May. The stock settled at that level after the June peak, grinding out a three-month test that ended with a breakdown this week. Taken together with highly bearish distribution readings, selling pressure could eventually break the pandemic low, establishing a secular decline that has the potential to last for several years.

Secular is a descriptive word used to refer to market activities that occur over the long term. Secular can also point to specific stocks or stock sectors, unaffected by short-term trends. Secular trends are not seasonal or cyclical. Instead, they remain consistent over time.

Citigroup stock has broken key support on heavy volume, indicating the downtrend that began in the first quarter is still in force.

Disclosure: The author held no positions in the aforementioned securities at the time of publication.