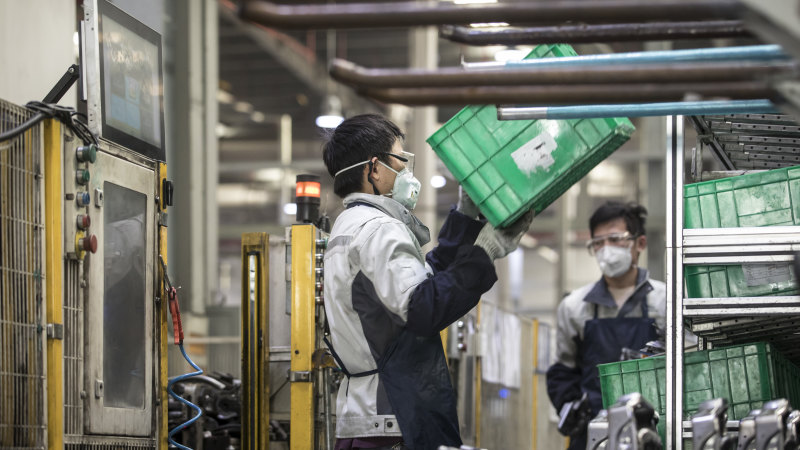 Coronavirus reignites debate on ‘the good and the bad’ of globalisation

Coronavirus is not bad news for everyone.

In the tiny town of Millicent, deep inside South Australia’s timber country, the giant spools and rollers of the local toilet paper mill are running 24 hours a day, seven days a week.

Workers at the mill, who have lived under the shadow of potential closure since US parent company Kimberly Clark announced plans two years ago to shed 5000 jobs globally and shift production to Asia, now find themselves working overtime to restock denuded Aussie supermarket shelves of Kleenex Cottonelle and Scott brand toilet tissue. 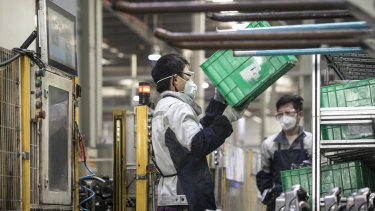 China is the source of half the electronic parts used by American manufacturers.Credit:Bloomberg

It’s certainly boom time for shareholders in Kimberly Clark, who, amid a global sharemarket rout sparked by COVID-19 fears, saw the value of their shares listed on the NASDAQ hit record highs this week.

As Australia’s dependence on global supply chains is revealed by the virus outbreak, it is perhaps ironic fears have focused so intensely on a product which Australians retain the capacity to make in bulk at home.

It’s a different story for many other consumer goods on which Australians rely, as factory closures in China continue to ripple out across the global economy, exposing the truly global nature of the world’s biggest economies. 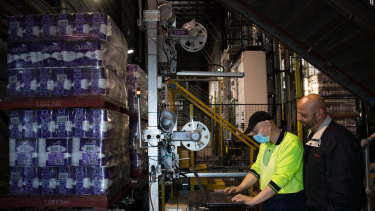 It’s perhaps ironic fears have focused so intensely on a product which Australians retain the capacity to make in bulk at home.Credit:Janie Barrett

“It reinforces all the fears about open borders,” Professor Ian Goldin of Oxford University and author of the 2014 book The Butterfly Defect: How Globalisation Creates Systemic Risks, And What To Do About It, told The New York Times this week.

But economists warn any impulse towards greater self sufficiency will only undo the economic prosperity that has flowed in recent decades from countries pursuing their "comparative advantage".

According to Dr Stephen Kirchner, the director of the trade and investment program at the United States Studies Centre, both economic theory and history show countries get richer when they specialise in producing goods and services at which they are relatively best at – and engaging in trade to obtain the rest.

“I think with globalisation, it’s a matter of taking the good with the bad,” says Kirchner. “There are lots of good things that come with globalisation. It has been shown to be correlated to higher GDP per person and higher productivity. “The bad side is you’re more exposed to things like the global financial crisis and pandemics.”

Kirchner says people have a tendency to overemphasise the degree to which countries are more interconnected than in the past. While communication technology and cheap travel has accelerated flows of people more recently, Australia – despite a period of insularity in the middle of last century – has always been open to the world. “If you go back to 1914, the world economy was probably even more integrated then than it is now. But then it all collapsed with WWI.”

When the Spanish flu struck in 1918, globalisation was already in decline, making the spread much slower.

Today, globalisation is also in retreat, with international trade flows yet to regain their pre-global financial crisis peaks. But cheaper air travel has accelerated the potential for diseases to spread.

Others are less sanguine.

International trade economist from the University of New South Wales Tim Harcourt says the COVID-19 outbreak will change sentiment about the benefits of globalisation. “I think it will cause a reset of thoughts about globalisation. I think it will also reset our thoughts about too much reliance on China as a trading partner. I think that was happening before coronavirus. I think that’s how Trump got elected.”

Rather than winding back trading links, Harcourt says the outbreak will likely lead to stricter quarantine laws. “I don’t think anyone would think we can do everything ourselves in Australia. We’ve been trading since the Aboriginals traded sea cucumber with the Indonesians. I do think there will be a push to put the green back in the green and gold – to keep things fresh and clean.”

Kirchner points out that becoming too heavily reliant on domestic production also brings risks. “I just think that relocates the risks, it doesn’t eliminate them. If you have entirely domestic supply chains, then you’re vulnerable to domestic disruptions.”

When Cyclone Yasi devastated much of Australia’s banana crop in 2011 prices skyrocketed in part due to a long-standing quarantine ban on imported bananas to protect domestic producers from the bunchy top virus.

Previous polling in Australia has found 88 per cent agree that “growing trade and business ties with other countries is a good thing for our country”, says Kirchner. “In many ways, this has been an elite failure that they have projected onto the population. There’s no backlash evident here. It’s all Trump, not the voters.”

But as the Australian government prepares a billion-dollar-plus stimulus package to head off a domestic recession, concern is likely to focus on the potential downsides of the Australian economy’s exposure to China.

Harcourt says concern about globalisation is nothing new, but that slower wages growth in recent years has forced a rethink by many. “I think [globalisation] created an opportunity, but we have to manage the social institutions to make it possible. Compared to the United States or United Kingdom, Aussies are relatively trade friendly – provided it looks after the workers and pays good wages.”