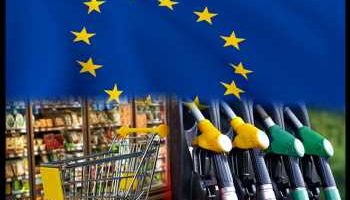 Eurozone inflation moved close to stagnation in May and was the lowest in nearly four years, driven by a sharp fall in energy prices, flash data from Eurostat showed Friday.

Inflation slowed to 0.1 percent from 0.3 percent in April. This was the lowest since June 2016, when prices remained unchanged. The May inflation rate came in line with expectations.

Headline inflation remained well below the European Central Bank’s target of “below, but close to 2 percent.”

On a monthly basis, consumer prices edged down 0.1 percent in May.

Excluding food, alcohol and tobacco, core inflation held steady at 0.9 percent in May.

The severe economic fallout is having a deflationary effect, which means the ECB is likely to stay in a crisis-fighting mode for some time to come, Bert Colijn, an ING economist said. The economist expects the ECB to increase Pandemic Emergency Purchase Programme as soon as next week.

Among big-four economies, Spain and Italy reported negative rates of inflation and Germany and France reported the slowest price growth since 2016.

Germany’s inflation slowed to 0.5 percent in May, the weakest since August 2016, from 0.8 percent a month ago. Likewise, France’s inflation halved to 0.2 percent from 0.4 percent in April. This was the lowest since May 2016.