If Biden can reel in the big fish, so can we

In the search for explanations of the slowdown in productivity improvement, the world’s economists are closing in on one of the significant causes: reduced competition between the businesses in an industry, giving them increased “market power” – ability to raise the prices they charge.

Research by various Treasury economists has found evidence of this happening in Australia. And this month US President Joe Biden acted to increase competition in various markets where it had been lacking. 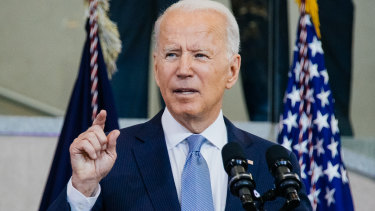 A new study by Jonathan Hambur has added to earlier research by Treasury people finding that Australia’s private sector has shown less “dynamism” – ability to become more economically efficient over time – during the past decade or so.

Hambur has used a database of tax returns covering almost all Australian businesses to find that their “mark-ups” have increased by about 5 per cent since the mid-noughties.

To economists, a firm’s mark-up is the ratio of the prices it charges compared to its “marginal” cost of production – that is, the cost of the last unit it produced.

Hambur says that, while part of this increase seems to have been caused by technological change, it also shows an increase in firms’ market power and a decline in competition.

If so, this would explain about a fifth of the slowdown in the rate of productivity improvement we’ve seen over the past decade, since we already know the same period has seen slower reallocation of resources from low-productivity to high-productivity firms.

We measure productivity by comparing the quantity of the output of goods or services with the quantity of inputs of raw materials, labour and physical capital used to produce the output. Increasing output per unit of input is the main way we’ve been able to keep improving our material standard of living over the past two centuries.

And one of the ways an economy increases its productivity is by more of the production being done by the firms that are best at turning inputs into outputs at the expense of the less-efficient firms. Resources (inputs) are thereby “reallocated” to their most efficient use. What causes this reallocation to occur? Price competition between the firms in an industry.

Many people assume big companies can set whatever price they like. But this can’t be true. Even in the case of a single firm selling an important product, if the monopolist uses its considerable market power to set a price that’s just too high for many people to afford, it will get to a point where it loses more from the sales it doesn’t make than it gains from the extra profit it makes from those people still willing and able to pay the extra.

This is why economists say a firm wanting to maximise its profits is able to charge no more than “what the market will bear”. How much the market will bear depends mainly on the strength of the competition it faces from other firms selling the same product.

The textbook, neo-classical model of a “perfectly competitive” market – which is hugely oversimplified and has never existed in the real world – tells us many firms in a market are able to charge a price no higher than their marginal cost of production (remembering that the “cost” includes a rate of profit just sufficient to discourage the owners of the firm from taking their financial capital to another market).

In this case, each firm that survives in the market will be able to charge only the identical market price set by the marginal cost. A firm that tries to charge more than the market price will sell nothing, whereas a firm that charges less will sell out immediately, but then go out backwards because it hasn’t covered its costs.

In the real world, there are a host of possible reasons why firms are able to charge a price higher than their marginal cost, and so make excess profit: because customers don’t know where to find the products that are cheaper but just as good, because customers are bamboozled by advertising and phoney “product differentiation”, because economies of scale and improved technology allow firms to get bigger and reduce their average cost of production. 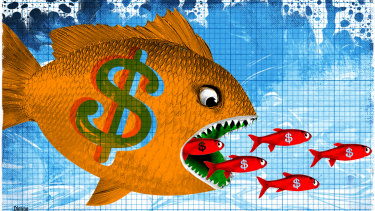 Firms pursue scale economies and other innovations in the hope of making excess profits, but theory tells us that competition from other firms will end up forcing them to pass their cost savings on to their customers in the form of lower prices. The consumers always beat the capitalists.

When competition isn’t strong enough to make this happen, however, firms can and do earn mark-ups well above their marginal costs. Now Hambur has confirmed this happens in Australia. Worse, our mark-ups have increased over the past decade, telling us competition has weakened further and given our businesses greater market power.

With US economists finding similar evidence of reduced competition contributing to America’s own productivity slowdown, it’s not surprising to see President Biden acting to increase competition. Earlier this month he signed an executive order urging federal government agencies to crack down on anti-competitive practices ranging from agriculture to pharmaceuticals.

Biden directed the Department of Justice and Federal Trade Commission to carefully review mergers and even challenge deals already put through.

He directed the trade commission to deal with competition concerns about the behaviour of Facebook, Apple, Alphabet’s Google and Amazon, and to limit “killer acquisitions” where large internet platforms buy out potential competitors.

The justice department will launch a review of merger guidelines to determine whether they are “overly permissive”.

So, what could our government do about our own decline in competition? Well, we could start by tightening our own meagre laws so the Australian Competition and Consumer Commission can be more successful in its efforts to protect us from anti-competitive takeovers.

Ross Gittins is the economics editor.