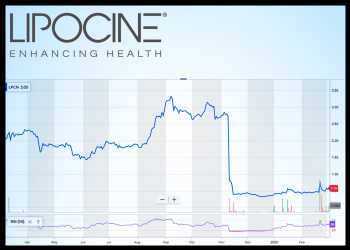 Lipocine Inc.’s (LPCN) TLANDO, an oral testosterone product candidate, is back at the FDA altar again, with a decision date now set for August 28, 2020.

TLANDO is proposed as a testosterone replacement therapy in adult males for conditions associated with a deficiency of endogenous testosterone, also known as hypogonadism.

The FDA had refused to approve TLANDO thrice before – in June 2016, citing deficiencies related to the dosing algorithm for the proposed label, in May 2018, saying that the product could not be approved in its current form, and in November 2019, citing the failure of the efficacy trial to meet the three secondary endpoints for maximal testosterone concentrations (“Cmax”).

During a Post Action meeting in February of this year, the FDA agreed that Lipocine’s approach to addressing the concerns raised in the November 2019 Complete response Letter through the reanalysis of existing data is a reasonable path forward.

Accordingly, the Company resubmitted the NDA for TLANDO, including the information generated by the reanalysis, which has now been accepted for review.

Will TLANDO make it to the finish line at least this time?

Meanwhile, the Company is embroiled in a patent infringement lawsuit with Clarus Therapeutics. The suit alleges that Clarus’ Jatenzo, an oral testosterone capsule to treat men with certain forms of hypogonadism, infringes six of Lipocine’s US patents. Jatenzo, which was launched in the U.S. last month, is the first new oral testosterone replacement product in over 60 years.