What happens when torrid monetary and fiscal reflation in the West meets tighter credit and evaporating liquidity in China?

We will find out soon enough who calls the shots for world inflation in a globalised economy dominated by cross-border capital flows. We will also find out whether these two colliding forces moderate each other, or set off the sort of wild ructions in currency, commodity, and bond markets that make hedge funds salivate. 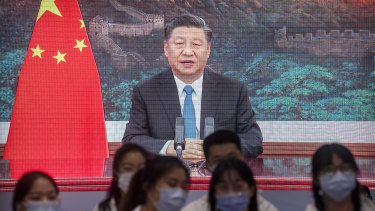 “We have an incredible situation where the US is throwing the kitchen sink at its economy but China is over the peak and hitting the brakes,” said Mark Williams, chief Asia economist at Capital Economics.

“They began to rein in the property sector last September and were very quick to pivot from worrying about growth to worrying about debt. The post-Covid investment boom has mostly run its course,” he said.

The Chinese “credit impulse” has turned negative. This tracks the ups and downs in “total social financing”, Beijing’s key mechanism for regulating the economy. It is an early warning indicator of China’s compulsive stop-go cycles, which in turn drive everything from commodity prices to Korean industry and German machine tool output.

“The People’s Bank of China is running an orthodox monetary policy when everybody else is going crazy,” said Simon Ward from Janus Henderson.

“People are too focused on the US and neglecting what is happening in China, where money is coming off the boil,” he said.

His measure of global money supply growth – six-month real M1 – has fallen to 3.9 per cent from a peak of 14.4 per cent last July. The gauge leads global output by around nine months. Expect a far less exuberant world economy by the end of the year, and even less rocket fuel for overheated stock markets.

It looks different if you are sitting in America where the Biden administration is running a budget deficit of 13 per cent of GDP, at a time when the output gap has closed, the economy is hitting capacity constraints, unfilled job openings are at record highs, and house prices are rising at 11 per cent – exceeding the subprime peak in 2006.

Joe Biden is consciously copying Franklin Roosevelt’s “war economy” model, this time in a double-barrelled fight against inequality at home and China’s technological arms race abroad. He is also copying Roosevelt’s recruitment of the Federal Reserve as an agent of fiscal policy and debt funding.

It is not often that the tectonic plates of the Pacific economy pull apart with such force. When they do there is invariably trouble. Let us pray for Goldilocks.

The Fed continues to buy $US120 billion ($155 billion) of bonds each month, even though the broad M2 money supply has risen 24 per cent over the last year, and even though core inflation is running at a 25-year high of 3 per cent. The Atlanta Fed’s index of “sticky price inflation” (intended to filter out noise) has proved to be anything but sticky. Core sticky CPI has hit 4 per cent on a three-month annualised basis.

The Powell Fed is sticking to its guns, calling this a “transient” effect due to post-pandemic bottlenecks. It vows to keep interest rates pinned at zero as far as the eye can see. The Fed may be right to take this historic gamble but such Jupiterian insouciance is becoming harder to sustain when even Keynesian theorists such as Olivier Blanchard warn of 1967 and the policy errors that led to the Great Inflation.

If the US were still a closed economy akin to the Bretton Woods era before globalisation, the Biden-Powell blitz would undoubtedly lead to galloping inflation. But the world is no longer flat. It is China that today sets the price for raw materials and global goods trade.

Elsa Lignos and Adam Cole from RBC Capital Markets say each deleveraging cycle in modern China sends a disinflationary wave through the whole global economy, and this time it may elegantly neutralise the V-shaped excesses in building up in the West.

But such a happy outcome depends on how hard China in fact slows, and how long the mini-slump lasts. Right now the credit impulse is contracting at a pace equivalent to 7 per cent of GDP, and we have the unfamiliar spectacle of a Chinese economy barely eking out 5 per cent growth, slower than the US, UK, or France. “The deleveraging campaign is going in full force,” said Société Générale’s Wei Yao. 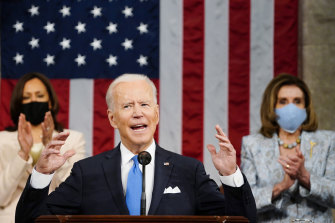 The US is spending up as it looks to rejuvenate the economy after being ravaged by the pandemic.Credit:AP

Retail sales have never really recovered (unlike the Anglo-sphere), services are still soggy, and construction growth has slowed to near zero. Once untouchable state enterprises or SOEs are being forced into default to cleanse the system of endemic moral hazard. Fiscal policy is being tightened by 1.5 per cent of GDP.

It is the disciplinary tough love of Liu He, the scourge of Chinese bubble economics, and it is hard to square his medicine with talk of a fresh commodity supercycle in New York and London.

China is after all the world’s buyer-of-last resort for industrial metals and coal. It consumes 50 per cent of iron ore supply, and half of this feeds the Chinese property sector – now on a low-calorie diet. “Commodity prices are at high risk of a major reversal,” says Société Générale.

What is striking is that Liu continues to tighten the spigot even though China is already close to structural deflation. Headline inflation is just 0.9 per cent and the core rate is even lower.

Yes, producer price inflation (PPI) surged in April to 6.8 per cent but that is pandemic noise: the rebound in commodities from artificial lows; and industrial bottlenecks across East Asia, which will clear. The Asian semiconductor shortage may well have swung to glut by next year. China’s PPI inflation rate usually lags the credit impulse signal by nine months.

“I think that the big surprise could be a global deflationary shock. Investors are so wedded to the reflation trade that there could be a really violent snapback if anything upsets that,” said Albert Edwards, Société Générale’s global strategist.

The benign scenario is that a slowing China offsets a surging America, maintaining a “Goldilocks” global recovery, neither too hot, nor too cold. That would be a beautiful vindication for the Fed, the Bank of England and the QE fraternity.

The malign scenario is that fiscal stimulus in the US fades later this year just as China hits the bottom of its deleveraging cycle. That would be a rude awakening for global bourses and crypto speculators, but sweet revenge for bondholders.

Worse yet is a scenario where US-China decoupling sets off a hair-raising slide in the dollar – and a rise in the yuan and yen – as Asian central banks and wealth funds stop financing the colossal Biden deficits and stop covering a US trade deficit heading toward $US1 trillion. Call it a US funding crisis.

It is not often that the tectonic plates of the Pacific economy pull apart with such force. When they do there is invariably trouble. Let us pray for Goldilocks.